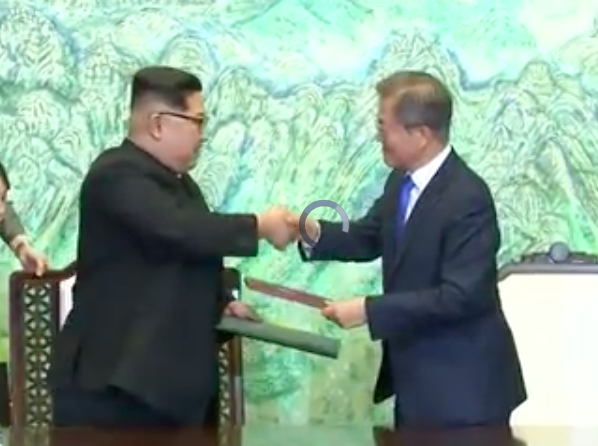 History was made Friday, as North Korean leader Kim Jung Un and South Korean President Moon Jae-in stood at the military demarcation line between their two countries. Kim Jung Un stepped over the line into South Korea, to shake President Moon’s hand, and then invited South Korean President Moon Jae-in to step over into North Korea. The visual alone spoke volumes and is something that was thought impossible just a few months ago. With this symbolic gesture comes a pledge between the two Nation’s to denuclearize the Korean peninsula and pledged to formally end the Korean War, 65 years after hostiles ceased.

The world should be rejoicing!

The Kim regime, going back to his father, have for decades lied and attempted to fool the world for their own benefit. This is a regime that is known for it’s brutal measures, it’s oppression of it’s people, and threatening to nuke the United States. Suddenly Kim Jung Un has turned over a new leaf? As the saying goes, a leopard doesn’t change his spots. This new Kim Jung Un we are seeing in the public eye is based more on a calculated effort for his Country’s gain, and more importantly, for his regime to hold on to power, than Kim Jung Un having a sudden change of heart.

As this news hit about this historic summit, news also broke this week that recent bomb tests in North Korea triggered a collapse of their nuclear site. The timing is no coincidence. Could it be that Kim Jung Un has imploded his own nuclear program, at least temporarily, and with the sanctions imposed by the US and the western world, Kim is left with little choice but to make overtures for peace? It’s very much a possibility.

If this leads to a real lasting peace, and a true denuclearization of North Korea, that is wonderful, and we should remain optimistic.  At the same time, the world needs to proceed with great caution as to Kim’s true intentions. As President Ronald Reagan used to say “trust but verify”.

The world needs to remember that Kim Jung Un cares about his power and will do anything to hold on to it. If that results in peace with South Korea and the United States and forces Kim Jung Un to do the right thing, that is the best outcome. At the same time, I especially urge South Korea to be extremely cautious.

We have yet to hear the details of this deal between South and North Korea, and the devil is truly in the details. What guarantees does South Korea have that this is not just a symbolic act or show by North Korea? Also, what exactly is “reunification”? Does this mean North Korea will come the way of South Korea, or does Kim Jung Un have hopes of fulfilling his father’s dreams for the Korean peninsula which is a unified Korea under a Socialist dictator of North Korea? These are all important angles to consider.

Keep in mind, that South Korea is a very wealthy, technologically advanced country. Kim could certainly benefit from new ties to South Korea, but long term, will he use those ties to better his Country and be a peaceful Nation in this world, or eventually will he use it for his own power? Regarding those “details”, what changes is North Korea guaranteeing, not just with disarmament, but with how Kim rules his own Country? I would find it very difficult for South Korea to maintain close relations with a country that is brutally oppressing it’s citizens and where foreigners are captured for spying and are tortured to death. All of these are “details” that need to be made clear as negotiations move along.

So for now, we should celebrate these overtures of peace, yet remain cautiously optimistic of what the future holds for North Korea, South Korea, the United States, and the world.

Tossing Gasoline on the Fire? Education Subsidies Are Doing Just That