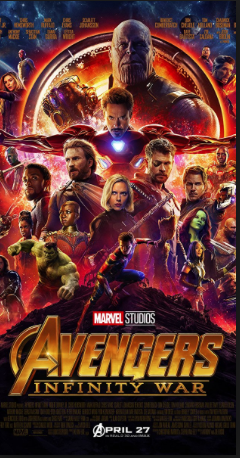 April 27th will be the beginning of a culmination of ten years and eighteen movies in the making in what is called the Marvel Cinematic Universe (MCU). The event Marvel fans have been waiting for is the release of their latest film, Avengers: Infinity War and as I mentioned on my blog, TrendChat247.com, I can’t wait! The most fervent fans will see it the day before either watching Avengers: Infinity War or as part of a 31 hour marathon. I experienced a similar type marathon a few years ago for Star Wars: The Force Awakens and doubt I do it again (but we’ll see when the next Star Wars come out late next year).

The early reviews for one of the most anticipated movie in years have been very positive, which builds even more excitement for audiences anxiously waiting to see it. But there are others out there who would like for all of this to cease.

In a recent interview with acclaimed director James Cameron, he gave voice to the sentiment of “superhero fatigue”, a common complaint regarding the supposed lack of emotional depth to the characters, reducing the films to “hyper-gonadal males without families doing death-defying things for two hours and wrecking cities in the process.”

I’m not saying these movies are meant to be Shakespearean, but the criticism that these Marvel movies lack heart in their stories is a somewhat lazy critique and I believe to be purposely dismissive to diminish these films while in Cameron’s case put his movies on a pedestal.

Let’s go through just a few brief descriptions of the films in the MCU:

Iron Man: Story of a selfish conceited person taking on the responsibility of doing something bigger than oneself

Thor: Dealing with family infighting while learning how to be a leader

The Avengers: Bringing together a group of extraordinary people with their own personal struggles to work together for a noble cause

Iron Man 3: After the experience in The Avengers a person battles PTSD

Avengers: Age of Ultron: Team overcomes an outside force that causes heightened personal strife among them

Captain America: Civil War: Unconditional loyalty to a friend turn friends against one another

Guardians of the Galaxy: Relationship with mother is central throughout as friendship is found

Guardians of the Galaxy 2: Relationship with father is central throughout

Black Panther: Dealing with loss of a father and the consequences of the past

Unfortunately since I wasn’t invited to attend the premiere with the rest of the media (maybe next time) all I can offer is my personal speculation as to the description for the new Avengers: Infinity War:  As much as they will suffer physically, they will suffer emotionally as well with the loss of one or more from the team.

It’s understandable to that people have grown weary over the slew of superhero movies lately. I am not one of those people. I’m amazed how Marvel has taken all of their characters to tell compelling stories while creating eighteen movies in ten years–and I’m even happier to say that Marvel has announced there are plenty more to come with plans for even more films up to 2028!

Gestapo Tactics Have Come to the United States