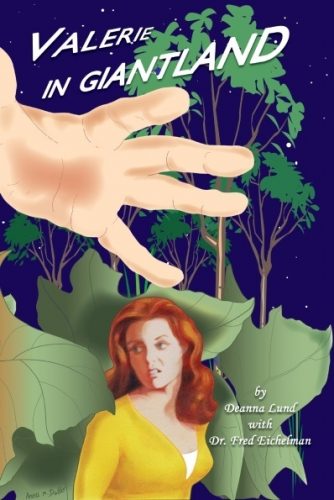 These adjectives well-describe the new novel by Deanna Lund with Dr. Fred Eichelman. Reprising her role as Valerie Scott from the iconic TV show, “Land of the Giants”, the book chronicles the adventures of the earthlings who have been accidentally transported to a planet filled with Giants during an inter-continental flight to London. You’ll find yourself on the edge of your seat as the story unfolds. Valerie and her team race against size and force as they ingenuously find ways to evade capture by the giants and find a way back home.

My favorite exchange occurs during a sequence when Valerie dreams she has been rescued and dealing with a media who is clueless (imagine that!!):

“You people are as blind as most of the giants we dealt with. They are out there. And living among them are people like us who only want to come home”.

Christians would also enjoy reading “Land of the Giants”. Among the ruins are lost books that appear to connect the Giants to the same ones we see throughout the Old Testament starting in Genesis 6. There is also a reverse perspective as we discover the Giants have observed the progress on earth, unfortunately in war-making:

“They are making bombs that can fly to other kingdoms and explode. There is even a plan for a bomb that will destroy whole cities.”

“My friends know how to treat those who are inferior, and we can do the same thing here to those enemies who are not like us”.

But there is hope as the humans are befriended by Giants that help them escape capture and death. And as the story continues we see an underground revolution of the friendly Giants in their attempt to re-shape the culture. As in many Sci-Fi thrillers, the main story is not so much about other worlds but a reflection and commentary on our own.

This book will enthrall readers of all ages and genre and particularly classic Sci-Fi fans of the 1960’s. But be prepared – it’s a page turner that’s hard to put down!

Deana Lund portrayed Valerie Scott in 51 episodes of “Land of the Giants”. She also appeared in many other legendary TV shows including “Batman”, “The Walton’s” and “The Incredible Hulk”.

Dr. Fred Eichelman is a retired educator and author of Faith, Family, Film: A Teacher’s Trek. He serves on the board of directors for Point North † Outreach Ministries and is editor of its publication, Point North † Tidings. He has organized and run many Sci-Fi and Western conventions over the last 40 years and this fall he will be hosting the “Happy Trails Virginia Style” convention in Roanoke.

Daniel Greenfield: The Media's War on the First Amendment

Glazov: Hamas Pays Muslims to Get Shot by IDF