PolitiChicks has had several very important articles about Hollywood hypocrisy and sexism which were eye openers. Yes, there were things we may have read about in the past but did not take seriously enough. The excellent articles by Ann-Marie Murrell and Morgan Brittany had my thoughts running in an added direction, that of a fan who growing up lionized many stars, directors and producers as role models.

This writer remembers a time when in a small town he discovered a real time machine. A machine that could take you to the past, future or any part of the world you wanted to go. It was his first experience with a movie theater and a screen that made heroes and villains bigger than life. Then along came the small screen on a television set every living room could have. These same heroes and villains were now in our home. Now the writer had loving family, relatives and adult friends who in their turn were role models. However, the big and small screen gave us romantic characters that any boy or girl would love to emulate.

Reading and seeing on the news the frightful people who have run major elements of the film and TV industry has made this writer yearn for those wonderful times of yesteryear when The Lone Ranger rode again and you knew you would always have Happy Trails with Roy and Dale.

That was why this writer so enjoyed Matthew McKenzie’s book, Creeds, Codes and Cowboy Commandments: TV’s B-Western Heroes Rules To Live By, which took him back to real heroes and heroines and reminded him that fortunately for us there were some good role models.

There have been other books out about Western heroes, however Matthew McKenzie has given the theme a new twist, one too often missed in the past. Those great B-Western films and TV shows have been more than action adventure tales. McKenzie not only knows his Westerns, 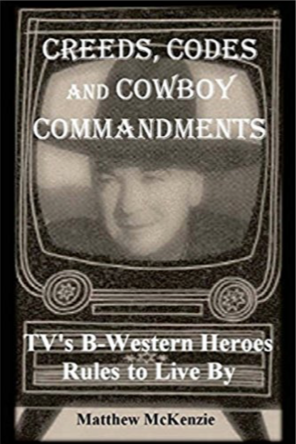 he is also a Biblical scholar and in this book draws interesting parallels between the movies we once loved with Biblical scripture. These stories had lessons and the author has researched his material to an extent that this book could easily be used for Bible studies and in churches.

The author concentrates on television and uses four of the most classic popular shows to make his points, Roy Rogers, Gene Autry, Hopalong Cassidy and The Lone Ranger. He gives background on each and then describes the code that each of these heroes encouraged their young fans to follow. The idea of a Western code was not new as before television Zane Grey emphasized it in his best selling Western novels. The cowboy hero was not just courageous, strong and expert in combat, he lived by a code. A code that relates beautifully to The Ten Commandments. To illustrate his theme the author takes the code of each of these four and shows how each one listed relates to Biblical scriptures which he freely quotes.

Roy Rogers was already recognized as King of the Cowboys in films long before he entered the world of television and The Roy Rogers Show was instantly popular. With him as a co-star, an equal player and not secondary, was Dale Evans. Out of this show there was a very popular club formed known as the Roy Rogers Riders Club. Yes, this reviewer was a member. There was a code list to follow and one was especially meaningful, “Love God and go to Sunday School regularly.” Roy and Dale often had special messages for young people in their shows relating to loving and obeying their parents, studying their lessons for school andbeing patriotic.

America’s first singing cowboy Gene Autry also had a written code for young fans which like all the codes stressed truthfulness, working hard and being patriotic. While not directly mentioning God or church there was an emphasis on prayer. Gene like Roy and other heroes dealt with in the book loved making personal appearances across the nation and gave a double emphasis on these beliefs. He also was responsible for the release of many Christmas themed albums.

Hopalong Cassidy was the first to recognize the importance of television and risked investing in purchasing his many films from the studios to be run on what became the Hopalong Cassidy show. Hoppy as he was known by fans actually was William Boyd and had a film career before he became identified as Hopalong Cassidy, a character originally based on books by novelist Clarence E. Mulford. Hoppy was seen as a hero who went to church and said grace at meals. Like Roy and Gene there were a myriad of books, comics, games and toys using his name. Like the other heroes his code put an emphasis on kindness to others and to animals. Honesty was paramount.

The Lone Ranger had a history long before shows on television with first being a popular radio show that premiered in 1933. On television the most popular star to be identified with the role was Clayton Moore and equally billed and portrayed was Tonto by Jay Silverheels. The Lone Ranger differed in background from most cowboy heroes and the show left such a mark that years later film makers have tried to revive the character. In his creed there was also an emphasis on God in the statement “I believe in my Creator, my country, my fellow man.” Like the first three cited there was also a great deal of merchandising.

These stars were also producers and directors of their shows and the writer has had the opportunity of knowing people who have worked with them directly. All lived what they preached and we need more of that today.

Matthew McKenzie also deals with other Western shows that had codes including Tom Mix, Buck Jones, Wild Bill Hickcock and others. Western shows that did not have codes but featured role models were Annie Oakley, Sky King, The Cisco Kid, Zorro and Sergeant Preston to name a few.

What makes the book doubly attractive are the photographs of stars involved and numerous illustrations. This is not just a book fans should have in their library, it is a must for all Christians who desire to see more faith and family related films and television.
The articles about sexism and hypocrisy in Hollywood does make us angry. As a former teacher this reviewer is equally angered for the young fans, the kids who have been, in his opinion, betrayed.
Share
Facebook Twitter Pinterest Reddit Share via Email Print

The Left's Nightmare of Trump Defending the Border

Roseanne: A Flicker Of Hope For The Silent Majority