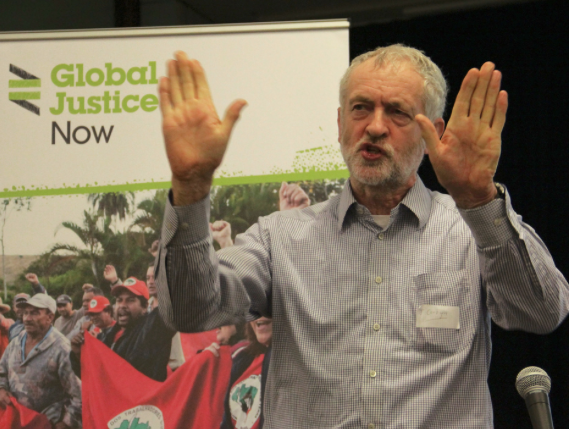 Jeremy Corbyn (leader of Britain’s Labor Party) represents the shameful, sneaky, face of anti-Semitism. The one that accepts Jews who subscribe to his radical brand of politics, the ones who will play by his rules.

He’ll probably admit to admiring Karl Marx. He was a Jew with no other agenda except the Communist cause. That’s good enough for the Corbyns of this world. So how can Jeremy be called an anti-Semite?

He hates Israel. This probably started when the Israeli electorate abandoned Socialism. True, the Labour Zionists pioneered the creation of the Jewish state. They drew the praise of the global Socialists for being the opposite to the cosmopolitan Jews they were familiar with, and detested. They were surprised by the spunk of the feisty New Jew who didn’t take a blow lightly but hit back hard and decisively as they created their kibbutzim and other settlements.

They identified with the Israeli pioneering spirit of labour (with a small “l”) on the land and in industry. The British Labour Party and the trade unions admired the example of Israeli Socialism, until Israelis rejected the crushing bureaucracy and economic oppression of their failed Socialist leaders. They cast them aside in the democratic process for the economic and personal development of the free market and to stand up against their enemies. This was unforgivable to global Socialists.

The leftist enemies of Israel gathered in Durban, South Africa, in their thousands to declare that “Zionism is racism” at a United Nations Conference against racism, and it took decades to have this stain removed from the United Nations General Assembly records.

And so they arose and, with a vengeance, swore to destroy Israel. They joined with Israel’s lethal enemies and gave moral support to their Jew-hating propaganda by devising a parallel narrative that positioned killers of Israeli Jews as oppressed and weak and Israel as occupiers and Nazis. With emotional imagery, falsehoods, and a huge war chest from leftist charities and NGOs attracted by the messaging of a human rights cause, these hyper-active Israel haters relentlessly BDS’ed the Jewish state, and was little response, not from the Israeli government, and not from the top leadership of British Jewry.

It has been local Jews and their Christian allies who have taken to the streets in defense of Israel. The leadership has, instead, chosen to criticize Israeli policy, thereby falling neatly into the hands of Israel’s enemies in Britain who declare, “You see, even the Jewish leaders hate Israel!” Of course the JLC and BoD don’t hate Israel, but this is how it is how our enemies broadcast their comments.

To paraphrase a Passover quotation, in every generation arises an enemy that knows not Israel and vows to destroy him. This generation’s enemies include the Corbyns of the world. It also includes Jews that hold Seders in which they openly call for the destruction of Israel. It is at such a Jewish Seder that Corbyn finds shelter and comfort as he tries to escape the accusation of being the anti-Semite that he is.

Who says that Jews cannot be anti-Semites? With our Jewish genius, even this is something we do better than the goyim. The problem is, we can also be infinitely more stupid than the goyim, and the cunning Corbyn is exploiting this stupidity.

When the Board of Deputies invited a radical leftist group, Yachad, into its midst, like Cleopatra they clasped a poisonous viper to their breast. While we Israelis paused for a minute’s silence on Memorial Day honoring our fallen fathers and sons, Yachad was hosting an outlawed Israeli fringe group to an event which called our brave young soldiers war criminals. The following day neither group gathered to celebrate Israel’s Independence Day. In every generation….

Then, it was Yachad. Today is it Jewda. The representatives of British Jews are confused as they suddenly awake to a threat that is real, close, and within their midst. That is why a Charlotte Nichols, a Jewish officer in Young Labour, can claim that Jewda is “a distinct part of mainstream British Judaism” as she accompanied Corbyn to their Seder. Jewda and Yachad are the Jewish Corbyns of this world.

Corbyn protests he is not an anti-Semite, that it’s only Israel, the collective Jew, he hates, not the individual Jew.

“Look at Jewda,” he would claim. “It’s part of mainstream Judaism. How can I possibly be an anti-Semite?” This is a modern reworking of the old trope, “I can’t be an anti-Semite. Some of my best friends are Jews.”

Radical Jewda abandoned traditional Judaism for a pseudo-Seder which tells of an exodus from Israel. Jeremy Corbyn felt right at home and supported with their narrative.

At this Seder sat enemies that knew not Israel and have sworn to destroy it.

Today, some of our Jews are blatant anti-Semites who scorn traditional Judaism and support Corbyn’s anti-Israel ideology. They must be reminded that they are in the camp alongside other Corbyn friends including Hamas, Hezbollah, and Fatah.

In Israel, we identify the enemy, both domestic and foreign, with more clarity, and we take affirmative action against both.

This is the valuable lesson that British Jewry must learn before it is too late.

Barry Shaw is the Senior Associate for Public Diplomacy at the Israel Institute for Strategic Studies. He is the author of “Fighting Hamas, BDS, and Anti-Semitism.”

Stuart Kaufman: Surprises During My Trip to Israel (It's Always Something)