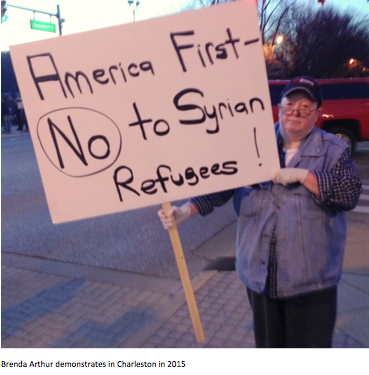 As I mentioned a recent article, a good friend and local activist, Brenda Arthur, was subjected to some serious intimidation tactics by a veteran member of the West Virginia State Police. Trooper Workman is well known to many Mountaineers as he is frequently quoted as a spokesperson for that agency in local media reports.

Those with whom I have spoken have all expressed shock that any citizen, much less a senior citizen and insurance professional (great aunt to six kids) would be contacted and questioned as to her reasons for conducting what is, in West Virginia, a citizen’s right to obtain information from public agencies. This story was first broken by Leo Hohmann, an Investigative reporter/blogger focused on refugees, global migration, and related topics.

Brenda chairs a local chapter affiliated with the national group of over 750,000 citizen patriots known as ACT for America. It is a strong group that supports limited, legal immigration, but vehemently oppose both illegal immigration, amnesty for those who entered our country illegally, and the abuse of taxpayer-funded efforts by the federal government and United Nations to inundate our country with refugees from many of the world’s Islamic and poverty-stricken regions where government infrastructure is non-existent making any sort of vetting of the refugees regarding their background or true reasons for asking for entry into the United States next to impossible.

Until recently, there were plans being announced by a newly “licensed” agency – claiming to be a charity – but that gains 95% of its income in tax dollars – to bring around one hundred new refugees to the Charleston, WV, area in the coming year. Since the Trump Administration lowered the total number of refugees permitted to enter this year to 45,000, those plans were temporarily shelved. During the time in between, Brenda had been trying to obtain confirmation of reports that the cost to West Virginia taxpayers for providing public assistance, housing, counselling, Medicaid, Education, and mandated additional state employees to administer to refugees already settled here under the State Department’s Refugee Resettlement Program but has had little success. Again, this year, the State Legislature failed to pass a Refugee Information Act bill that would require state agencies to report these costs. She has been doing this by filing numerous Freedom of Information Act requests with state and local government departments for the past several years often encountering delays and stalling tactics along the way. She remains undeterred even after a business card appeared on her front door.

Apparently, someone within the City of South Charleston government took offense at one of her requests for information about a permit filing by the largest mosque in the Charleston area operated by the Islamic Association of West Virginia. The complex expansion was completed about two years ago. This mosque has been noted to have included among its guest speakers a highly anti-Semitic speaker, Nihad Awad, executive director of Council on American-Islamic Relations or CAIR, an un-indicted co-conspirator in the notorious Holyland Foundation terror funding case. The permits were relating to significant expansions of the mosque from its present size.

For those not fully aware, since the creation of the Department of Homeland Security following the 2001 attacks on the World Trade Center, operations known as “Fusion Center” have cropped up in many cities across America. These centers are comprised of many federal, state and local law enforcement agencies and intelligence gathering entities that share information with other local centers as well as the DHS, et al., in Washington, D.C. The purpose is purportedly to gather intelligence regarding potential terror attacks or subversive activities. However, it is becoming very apparent that there are other purposes to these “Fusion Centers.”

What has been for many years a completely innocent means by which citizens can know about the workings of local and state government, a Freedom of Information Act request for records should not be something that initiates a visit to one’s home by a member of the State Police. But that’s what happened to Brenda. She came out of her house to find a business card from Trooper Workman in her yard with a note on the back stating, “Please contact me at (his phone number).” When she called him, thinking that it related to some event in her neighborhood, and wanting to assist law enforcement in any way reasonably possible, asked him what his request was about. To her total shock, he asked her why she was making an F.O.I.A. request regarding the local mosque’s building permits.

Whatever that reason was, it certainly was not appropriate for a police officer to even ask. In fact, it is specifically stated in the law that the reason for the inquiry need not be provided to obtain the documents requested. Clearly, the actions of this officer and, likely, the entity with which he works were completely out-of-line and contrary to the provisions of the FOIA law.

The tip-off to the reason for this challenge to her right to ask for such information can be found in a quote credited to a member of South Charleston city government, “We have a good relationship with the mosque.” This statement was similarly repeated to Brenda by Trooper Workman.

It is apparent that what is really happening is, again, as so many time in recent years, political correctness has run amok and those connected with Islam have thoroughly intimidated government officials into defending them at the expense of citizens who have legitimate concerns when supporters of terrorism, Sharia Law, and other practices antithetical to our constitution infiltrate our cities.

I have lent my voice to calls for legislative safeguards to this sort of citizen-brow-beating based on nothing more than a request for information. After all, the mosque’s website provided photos of Mr. Awad addressing its congregation. They aren’t even hiding it. Why is it so surprising that such speakers and activities in a community surrounded by a multitude of chemical plants and other hazards would raise concerns on the part of peaceful residents of the city. Personally, I would be more distressed over the “open arms” attitude of the city fathers and the state when it comes to inviting people into our communities without any evidence that the individuals are who they claim to be or that they are interested in living and working in peace among us under our laws and our constitution. Based on the choice of their speaker at the local mosque, I would be very concerned myself.

Additionally, why is it that so many of those being invited to enter our country are incapable of supporting themselves to the point that our state, nearly always one catastrophe away form financial ruin, is expected to spend taxpayer funds to “help them resettle.” I could write another chapter on that subject.

It is going to take many voices raised in unison to combat this sort of government bullying. Freedom of association, speech, and press are under constant assault lately. The open-borders gang and the leftist who hate our constitution are always nibbling away at any sort of speech that does not kowtow to their points of view. Threats, intimidation, name-calling, have all been used against those of us who support and defend our constitution at all cost. This is a prime example. The government, however, should not be helping them. Our ability to defend our way of life is being attacked. It is going to take directed action by our legislators to correct the abuses of Fusion Centers. If they don’t, you also have a vote. It is the only means whereby someone else’s great aunt is not awakened by the sound of heavy knocks at the door in the middle of the night. It doesn’t seem like those sorts of events are far from reality.

Questions Never Asked About Islam and the Left