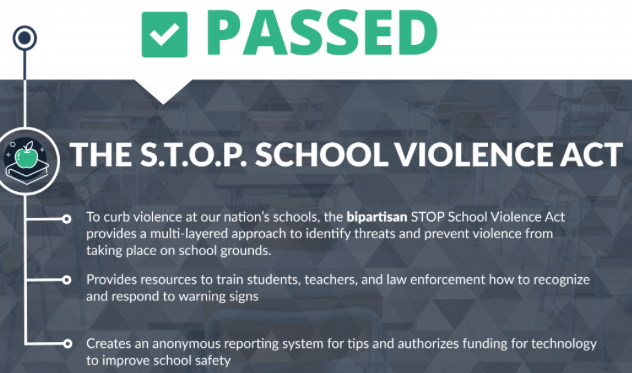 Just in the last few hours the House of Representatives passed the Stop School Violence Bill. The Senate is very likely going to vote on its companion bill in the next few days.

Many people and groups have lauded this bill’s passage, most notable among them is the NRA. This surprises me greatly because the NRA-ILA is usually very diligent in the analysis of such things. They dropped the ball on this one.

Buried in the bill is a provision whereby the development of “anonymous tip systems” would be funded by the federal government to individual jurisdictions across the country. While the idea that a central clearing point for such information can prevent reports from “falling through the crack” has anyone considered for a moment that this could be opening a huge can of worms for those thousands of legal firearms owners who could become subjects of anonymous tips from people with less than honest motives for making a report against them? The first question that comes to mind is how will these complaints be handled? Will it trigger an investigation, a hearing, an immediate confrontation including confiscation of weapons without due process? In what manner will the subject of such a report or complaint be permitted to defend themselves against it? Will the burden of proof be placed on the subject or the reporter? Well, if the reporter is anonymous, that one is already answered. This is the stuff of 1984 on steroids…or perhaps that movie with Tom Cruze – Minority Report anyone?

While some of the things in this bill are worthy of consideration and worthy of implementation, the first concern is that this sort of bill usually comes with federal strings attached in prominent places. Law enforcement, except where the crime involves interstate activity, is a state-controlled function. The federal government really has no business involving itself in crimes that do not cross state lines or involve federal property, installations, or funds (like federally insured banks).

Even if I despise the actions of the Florida State government in passing a higher age limit for firearms purchases or any of the other provisions, it is within their right to do so and it is up to the voters of Florida to decide if they were correct in doing so. The next election will likely tell the story. For the federal government to impose its will on the states regarding purchase age, reporting systems, and the like is extra-constitutional if that document is read in the context of original meaning.

However, there is at least one far better thing happening out there since the Parkland shooting. One stands out as a stellar example for other schools/teachers to adopt. It was, surprisingly, highlighted in a recent Education Week article.

The update I received yesterday morning contained an absolute diamond of an article about the efforts of a Nevada teacher to take her students through a lesson on the 2nd Amendment in a way that is, to me, totally new, unique, and beneficial to a degree that is truly amazing (an over-used word these days, but it definitely describes this method of teaching about the Bill of Rights and the 2nd Amendment, in particular). It is certainly superior to putting students in the streets with sometimes vulgar or inaccurate signage demanding things that will do little to combat the misuse of firearms or mass murder.

Rather than repeat the entire article here, read it for yourself and take special notice of the classroom white board behind the teacher in the accompanying photo. It is a beautiful illustration of the inter-connected nature of the ten amendments known as our Bill of Rights. I pray that other teachers take the example of this Nevada teacher who should be a strong candidate for Teacher of the Year. She has my vote!