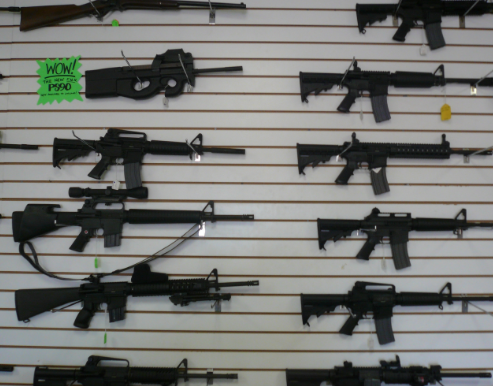 From 1982 to 1992 I served as the manager in charge of security for one of the top ten convention centers in the United States. During that time several of the largest gun shows held in the Southeast were staged with that convention center. During my career, I visited other facilities that also hosted gun shows in the normal course of renting their premises to customers. That is the business of operating a convention center. This is offered as background to the following:

Much political talk has been offered regarding all the things “we have to do…” to prevent more mass shootings and terroristic acts with firearms. Among the measures that are most popular are efforts to “close loopholes” in the National Instant Check System used to screen potential purchasers of firearms. There is one “loophole” that certainly needs closing. It has been a glaring problem with the system that manifested itself in tragic terms in the shooting at a church in Texas last year. That problem is that not all law enforcement agencies and government entities are required to or choose to report prohibited persons to the system. If we are going to have such a system that functions reasonably well, it needs to include ALL appropriate agencies that might have contact with prohibited persons before they have occasion to purchase a firearm.

But the most ridiculous claim by the left and many uninformed, good-intentioned persons is suggestions that the sales of firearms conducted within the premises of modern-day gun shows are completed while by-passing the NICS system. It simply is a bold-faced lie.

Across the United States there are gun shows conducted at National Guard Armories, Civic Centers, and other public venues. Does anyone actually think that the owners of these facilities would not include a requirement in the rental agreement that the show ensure that all sales are conducted according to all applicable state and federal regulations?

If, in some rare instance, a show was to be advertised in a small town or out in the country where they might find an open field belonging to a local farmer, yes, there is the possibility that the management of the show could attempt to circumvent the law. However, it is highly likely that the local law enforcement authorities would be aware of the show being held and visit the show to ensure that it is being conducted legally. In those rare cases, that agency would have no trouble shutting down such a show pretty quickly. Believe me, it happens so rarely that it is hardly something to be concerned about.

Every show I have had contact with over the past 20 years or so has employed a Federal Firearms Licensed dealer to handle NICS checks on anyone making a firearm purchase at the show but doing so from an exhibitor who does not hold an FFL. Most exhibitors at gun shows already have an FFL and conduct the check themselves or pay the show to do them for the exhibitor. Setting it up this way is a defensive move on the part of show management to insulate from liability should a purchase be made by a prohibited person who later uses the firearm to do harm. It is common sense.

If you can find a single advertised show that does not provide this protection, please consider that it is commonplace for such shows to hire local police for door security. They would be in the best position to close any show stupid enough to allow sales without proper background checks. This problem is a non-problem ginned up by the left to make it seem like the leak in the bucket of the NICS system. It is not something that requires remedial legislation.

According to an article by Gregg C. Cummings who researched CDC records,

“[Since 1900] There were…145 [mass terror attacks] that had loss of life, to include the 1927 school bombing, which killed 44 people. Here is what we know about those 145 attacks. The “tool” used to kill were 69 bombs, 49 guns, and the rest were ropes, arsons, bioterrorism, vehicles, stabbings, and planes.”

Ask yourself this…which of the incidents listed was perpetrated with a firearm purchased at a gun show by someone who was a “prohibited person” based on the NICS criteria? I hear crickets…

#MeTooOldies – The Victimization of Men by Women in Oldies Music

Schools Are Not Parents (and Neither is the Government)