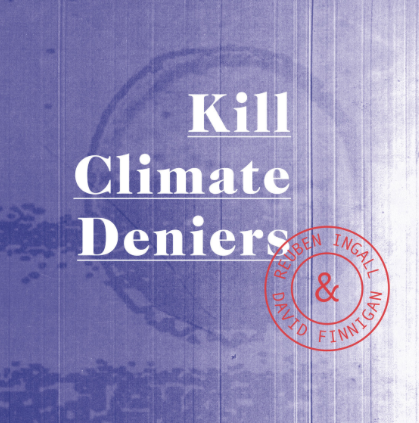 Last year PolitiChicks co-owner Morgan Brittany was told, to her face, that ‘something needed to be done’ about people like her, and/or anyone who didn’t follow the cult of climate change.  As it turns out, there’s an entire movement hoping to do just that–hiding, as usual, under the guise of “art”.

Global warming skeptics, beware: A play with the alarming title “Kill Climate Deniers” may be coming to a theater near you.

Written by Australian playwright David Finnigan, “Kill Climate Deniers” kicked off Thursday the 2018 season of the Griffin Theatre in Sydney after a week of previews, with the final show scheduled for April 7.

The plot? “As a classic rock band take the stage in Parliament House’s main hall, 96 armed eco-terrorists storm the building and take the entire government hostage, threatening to execute everyone unless Australia ends global warming. Tonight,” said the play’s website.

The play was commissioned in 2014 with a $19,000 grant from the Australian government, but its first staging was shut down following a backlash led by conservative Herald Sun columnist Andrew Bolt.

#Oscars2018: The Height of Hollywood Hypocrisy