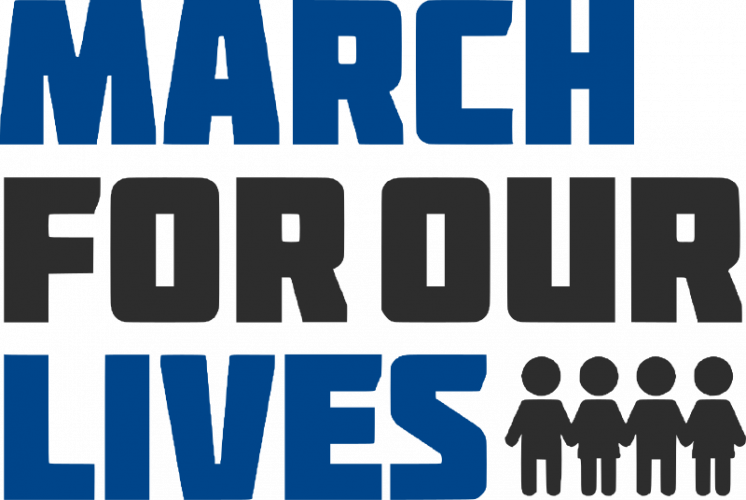 Last weekend was the “March for Our Lives” rally/protest in Washington D.C. It was the culmination of the radical left’s takeover of the school shooting issue after the tragedy in Florida. It is not longer about school shootings (and really hasn’t been for weeks now). It is totally about gun control and curbing (and eventually) eliminating the Second Amendment. As Daniel Greenfield covered here, the rally in Washington was funded by the left. And in reviewing this past weekend’s event, the content was right out of the left’s playbook.

First we had signs, signs everywhere signs (most say hooray for our signs). You can’t have a good protest without them! The ones below caught my attention and I couldn’t help but think about the hypocritical nature of advocating for safety for school children by people who are by and large OK with abortion:

Everyday 96 people die from gun violence (over 1,000 abortions per day)

Stop blaming the mentally ill (Of course because that may actually be getting to the root cause which is not in the gun control template).

NRA the blood is on your hands (but none on Planned Parenthood?)

Over 35000 Americans die every year from gun violence. (So far this year alone over 200,000 have died from abortion, around 80,000 done by Planned Parenthood)

There is a mass shooting of 4 or more people every day in the United States.

“Gun violence is a public health crisis” (What, has that replaced climate change??? Has anyone informed Al Gore?)

If I die at a school shooting drop my body at the NRA. (Why not Planned Parenthood? At least they could make some money off of it).

Hey Hey NRA how many kids have you killed today? (Yawn. This sign is at EVERY leftist rally. The perpetrator is just switched out to the cause of the moment).

I wish Obama had taken your guns. (So now you want that Hitler Trump to do it. You have to laugh at the utter silliness of signs like that)

Gun control means cops too. (Can someone please tell this person that the cops were nowhere to be found on Feb 14. And that the rally was protected by police with GUNS!)

NRA is a terrorist organization. (Yes…I knew this sign had to be there. Odd how NONE of the recent shootings were done my NRA members…except of course the man who STOPPED the shooting in Texas)

As always with the left these are slogans not solutions.

The we move on to the students themselves. They don’t realize it but they are being totally manipulated by the left. It is beyond shameful how the media/Democrats have used these kids as props to further their own agenda. They can’t win the debate on facts so they have to rely on fear and emotion. And what better way than to have teenagers make an emotional appeal for gun control. And make no mistake: the ultimate goal is eliminating the Second Amendment. It may take a generation but the left is relentless (and patient). It took them 60 years to implement government run health care. And have you noticed how Nicholas Cruz has completely disappeared from this issue?

With a couple of exceptions I don’t blame the kids. They are young and impressionable. While some are talking about letting the children lead, we all know they are the pseudo-leaders to the politicians and elitists who are pulling their strings behind the scenes. And when their usefulness has served it’s purpose, they will be thrown away like yesterday’s trash. This is inevitable and while occur quickly when it does. Just ask Cindy Sheehan.

There is one student though who is being pushed as a “leader” who is about to go over a cliff. I am talking about David Hogg. Over the last couple of weeks this attention that he has been getting has obviously been too much for him to handle. And it is going to his head. It is not unlike the transformation we see time and time again with pop music stars. But his rise has been meteoric and stunning in it’s quickness. And you can see it taking a toll. He has become so arrogant that he calls himself the NRA’s worst nightmare. Videos have surfaced online with an obscenity laced screed against old folks, parents and gun sellers:

“It just makes me think what sick f**** out there want to continue to sell more guns, murder more children, and honestly just get reelected,” Hogg said. “What type of person does that? They could have blood from children splattered all over their faces and they wouldn’t take action, because they all still see these dollar signs.”

And then there his speech: 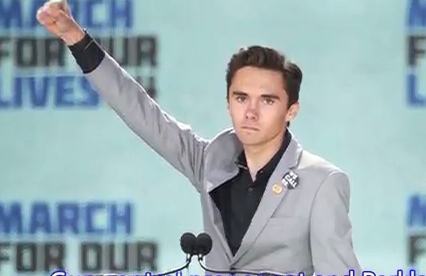 And here I thought the march was about school safety. And just take a look at the photo of him as he ended his speech. What does this remind you of?

This young man is stretched out like a rubber band and eventually he is going to snap. And when he does his fall will be just as stunning as his rise. The media made him and as he will soon find out,they can “unmake” you. What will he do when he is no longer “useful” and the center of attention? When CNN and MSNBC aren’t calling him for an interview. I hope he has a good support group around him because he is going to need it. But the more he keeps talking the more he is burning bridges. I guarantee you not every student at his high school likes what he is doing in his representation of them.

Finally, in reviewing the march I couldn’t help but notice something else. Apparently when the event ended everyone just threw down their signs, food, drinks etc and left. So much for taking care of the environment! I figured they would take their signs with them since they will need them for the next protest cause. I tell you the level of hypocrisy from these folks who never miss an opportunity to lecture us is astounding. But then again maybe not. All the left has is symbolism. There is no substance. What a role model they are for the kids they claim to be protecting.

Ahead of Their Time: Small Texas Town Has Been Arming Teachers 11 Years!

What Did the Founding Fathers Intend When They Wrote the Second Amendment?