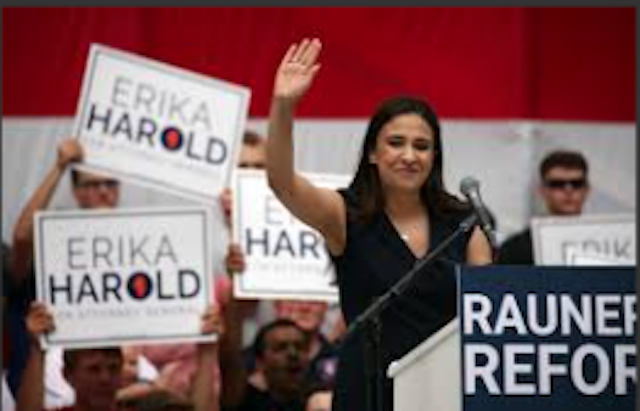 Republican candidate for Illinois Attorney General Erika Harold believes her home state is worth the fight. And with eight Democrats vying for the Democratic nomination, Harold knows it’s time to take on the Madigan political machine. I recently spent time talking with Erika about her 2018 run against her Illinois Democrat opponents.

“Attorney General Lisa Madigan has not used the full measure of the Office’s power to investigate allegations of public corruption—such as patronage hiring and improper awarding of government grants. I would be proactive in fully utilizing those powers,” Harold explains.

Harold admits the State’s challenges are numerous and far reaching. Illinois faces public corruption (an infamous trait seemingly whitewashed by Dems); a regulatory environment that unnecessarily burdens businesses and hinders job creation; an opioid crisis that is ravaging the state; and entrenched political interests that thwart much needed reforms.

Harold is sincere about why her and why now. “I am running for Attorney General because Illinois needs an Attorney General who will set forth a fresh vision, exercise independent judgment, and fairly enforce Illinois laws without regard for political or partisan interests. I am committed to being that type of Attorney General.”

An Illinois resident, Harold knew that education was the ticket to success and a better life. The Phi Beta Kappa drove herself to be the best, graduating as a Chancellor’s Scholar from the University of Illinois.

When Harold was blessed with the opportunity to attend Harvard Law School, she was thrown a curveball. Lacking the funds to pay for school, she got creative. Harold decided to compete in the Miss America Organization to attempt to earn the scholarship money necessary to pay for law school, and she won. She also used her platform to give back and has been doing so ever since.

Upon graduating from Harvard Law School, Harold worked as an attorney in the litigation groups of Sidley Austin LLP and Burke, Warren, MacKay & Serritella, P.C. She represented businesses in commercial disputes and advised religious institutions in matters involving First Amendment protections. Harold also was active in the law firms’ respective legal education efforts, teaching students about the U.S. legal system as part of the Lawyers in the Classroom program and coaching a team of high school students in the City-Wide Mock Trial Competition. She was also part of the teaching faculty for Harvard Law School’s 2017 Trial Advocacy Workshop.

Harold currently serves on the national board of directors of Prison Fellowship, the world’s largest outreach to prisoners and their families, where she advocates for criminal justice reform. She was also recently selected to the 2017 Emerging Lawyers list, recognized in the categories of commercial litigation and civil rights/constitutional law.

An Authentic Candidate with a Positive Message for Illinois

Today, Harold is an attorney at Meyer Capel, one of Champaign County’s largest law firms. As a candidate running with the legal expertise and mental toughness to clean up the Illinois AG office, Harold looks forward to a day when Illinois doesn’t face a list of grave challenges, financial mismanagement and a political class that only protects itself.

“As Attorney General, my priorities would include ensuring our state’s laws are fairly and uniformly enforced and that the Constitution is upheld. I would fight corruption in government and ensure that the Attorney General’s office does not unfairly target businesses and industries within Illinois,” Harold said.

“In addition, I would combat the sexual harassment that is pervasive in state government and politics. I am eager to provide the leadership we need to address the opioid epidemic, pursue reforms to the criminal justice system, and help students, parents, and schools better address cyberbullying.”

Harold explains the importance of more women running for office. “Women are far too underrepresented in state and federal government. The recent focus on sexual harassment in the workplace shows a greater need for unique voices and perspectives in political and governmental leadership. It is especially important that more Republican women run for office because having an increased number of Republican political leaders who are women would better enable the party to engage broader groups of voters.”

In her run for U.S. Congress in 2014, Harold says she learned a lot about herself and how to connect with voters from all backgrounds regarding the issues that matter most to them. “Regardless of party affiliation, it is clear Americans and more specifically Illinoisans want to cut through today’s partisan bickering and solve the country’s and the State of Illinois’s biggest problems. That is why, despite the perception of Illinois as being a deep blue state, I believe I have a great chance at becoming the next Illinois AG. I can’t wait to roll my sleeves up and start working to solve these problems.”