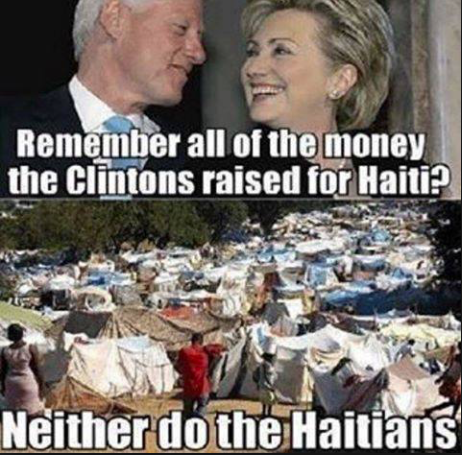 When an earthquake hit Haiti in ’10, everyone who was anyone in the international community quickly showed up. Bill Clinton had been appointed as the UN Special Envoy for Haiti a year earlier where he had touted the “unique opportunities for public and private investment” in Haiti. The earthquake opened up those opportunities to Clinton Foundation donors.

A year later, Bill Clinton was touting a $45 million new hotel owned by an Irish cell phone tycoon who was a close pal as the only thing a country with a million homeless needed. A CNN puff piece claimed that the hotel would house “aid workers, potential investors and other visitors”. Like Anderson Cooper, who needs someplace to take a hot shower after standing waist deep in water for 5 minutes on camera.

Haiti was a gold mine for the Clintons. Literally. Hillary’s brother was added to the board of a small company that got a gold mining permit at half the standard rates with a 25 year renewal option. Tony, Hillary’s brother, is a college dropout who had worked as a repo man and a prison guard.

The Clintons not only turned a disaster into a slush fund, but even got Hillary’s idiot brother a gig.

Before the UN peacekeeping mission arrived, Haiti was a disaster. After it left, it was a disaster with cholera. The UN peacekeepers brought the disease with them and spread it around, killing 10,000 people and infecting at least 800,000 others. None of them could get into a Clinton luxury hotel.

Before the UN showed up, Haiti had 99,000 problems, but cholera wasn’t one of them. Then UN peacekeepers spread their multinational fecal matter into the Artibonite River. Soon the UN was trying to raise $400 million to clean up the national disaster that it created on top of an existing national disaster. It asked its staff for money and those donations added up to $6K or a week in the Presidential Suite of the Royal Oasis, Haiti’s first 5-star hotel, with financing from the Clinton Bush Haiti Fund.

But say what you will about the Clintons, unlike the UN, they’ve never given anyone cholera. (That we know of.) So far the UN has only come up with a few million. And everyone is demanding that the United States pay for the cholera that the United Nations spread even though we are already a cholera importer, bringing in top grade cholera from Latin American outbreaks to New York, Kansas and Virginia.

But that’s globalization for you. In a flattening world, Nepalese peacekeepers bring an exotic strain of cholera to Haiti. Refugees from Haiti bring it to America. Hillary Clinton’s brother tries to get in on a gold mine. And a horse breeder in Kentucky and a plumber in Michigan have to pay for the UN’s cholera.

But it would be a slow day at the United Nations if all it did was start a cholera epidemic that infected hundreds of thousands of people, lie about it for years, then pretend to take responsibility, refuse to actually pay for it, and then try to blame the whole thing on Trump who had been hosting Season 10 of The Apprentice back then. Unlike the UN, The Apprentice never infected 800,000 people with cholera.

Since it was the UN, it also had to sexually abuse children to give Haiti the full multilateral experience.

“One boy was gang raped in 2011 by peacekeepers who disgustingly filmed it on a cell phone. What do we say to these kids?” UN Ambassador Nikki Haley asked.

Those were the Uruguayans. The Sri Lankans had their own child sex ring of some 134 peacekeepers paying children 75 cents to abuse them and the Nepalese gave most of the country cholera.

That’s the international community for you. If it doesn’t get you one way, it’ll get you another way.

It’s hard not to look at that and conclude that the United Nations is its own war crime and that the best possible punishment is to put everyone involved on trial in one of the UN’s patented multi-generational war crimes tribunals that only end when everyone dies of old age. After 11 years, the Cambodia tribunal managed three convictions. Two others died of old age. That’s how the UN coddles those monsters it wants to punish. Haiti is an example of how it treats those victims it claims to want to help.

The UN might be more effective the other way around. Just imagine if North Korea’s Kim Jong Un had to worry about being “helped” and “protected” by sex-crazed and cholera-infected UN peacekeepers.

But it wasn’t just the Clintons and the United Nations living it up in Haiti.

The latest scandal has hit Oxfam. The leftist alliance claims to want to fight poverty, but it spends more time denouncing the rich. Its global inequality report is a staple of leftist talking points. Its Even It Up campaign is a blatant call for wealth redistribution. The anti-Israel group’s spat with actress Scarlett Johansson over her endorsement of Israeli products led to, what its boss called, a “PR disaster”.

But Oxfam had no idea what a real PR disaster was until the lefty charity’s own Haiti scandal hit.

Oxfam’s Haiti director was using the villa rented by the charity to host prostitutes. Senior Oxfam aid workers had exploited women and possibly even children. Oxfam had covered up the scandal in ’11 and tried sweeping it under the rug. And now it’s offering awkwardly unconvincing apologies.

Even it up indeed.

An Oxfam spokesfiend explained that the cops hadn’t been called because it was “extremely unlikely that reporting these incidents to the police would lead to any action being taken.” Fear that the police will do nothing is generally why organizations don’t report crimes committed by their members to the authorities. That and a deep concern that their donors will stop subsidizing their child rape villas.

“I don’t think it was in anyone’s best interest to be describing the details of the behaviour in a way that was actually going to draw extreme attention to it,” Oxfam’s boss said.

“We’re from the international community and we’re here to help.”

The lefty politicians and professional activists who rushed to Haiti were as enthusiastic about helping the Haitians as the Congressional Black Caucus is about lowering black unemployment. The left isn’t a charity. When it shows up to help, there are going to be luxury hotels, villas and sex rings involved.

And the people it claims to be helping will be even worse off than they were before.

California Sanctuary State: How Dare You