“The copycat phenomenon is real,” Andre Simons, of the FBI’s Behavioral Analysis Unit. One group of researchers found that up to 20 or 30 percent of attacks can be influenced by previous attacks.

During Omar Mateen’s rampage at the Pulse nightclub, the Muslim terrorist searched for news coverage of the ongoing attack. He wanted to see what the media was making of his massacre.

Shootings that are widely covered by the media produce a cluster effect. After each attack, the risk of copycat attacks goes up for 13 days. If the media covers the attack, the copycat killers will come. 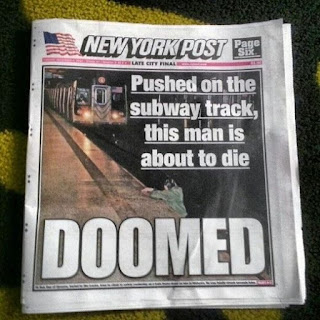 On Dec 3rd, 2012, Naeem Davis, a homeless Muslim refugee from Sierra Leone, shoved a middle-aged Korean man in front of an oncoming Q subway train in Times Square. A photographer snapped a shot of him waiting to die that appeared on the cover of the New York Post and then went around the world.

And that was that… except it wasn’t.

On December 28, there was another shoving murder. After the round of murders, suicides and accidental deaths, seven people  had died under trains in 2013; a number that does not include the deaths previously mentioned. In Feb 2013, two people committed suicide by jumping in front of trains. Another was killed in a possible accident. One lost a leg. Two others were seriously injured. And then there was another suicide.

These numbers are not normal, but they are predictable. And that photograph and its consequences have dark implications for school shootings, mass shootings in general and human nature.

Around the same time that the American Revolution was getting underway, the German writer Goethe wrote a book that would become the Catcher in the Rye and Twilight of its day. “The Sorrows of Young Werther” had the dubious honor of being disowned by its author, starting a fashion trend and another deadlier trend.

Werther Fever spread around the world. Readers wrote parodies of the book or imagined different endings for the characters. Some wrote themselves into the story or wrote poems about the story. There were unauthorized sequels, people dressing up like the characters and all the usual things that we have now come to take for granted, but that were still somewhat new and surprising then.

And some committed suicide like Werther. The Werther Effect was born and it had a sneaky way of resurfacing whenever and wherever the book became popular again.

Some 200 years later, German television debuted “Death of a Student”, a six-part series about Claus Wagner, a high school student who commits suicide by jumping under a train. Each episode began with Claus jumping under the train. The series was supposed to teach teenagers that suicide was wrong, but it had the opposite effect.

The real message of “Death of a Student” was the same message as that of “The Sorrows of Young Werther”, if you kill yourself, lots of people will pay attention to you.  And suddenly the number of teenage boys killing themselves by jumping under a train increased by 175%. Having failed to prevent enough suicides, the show aired a second time. This time fewer people were watching and the suicide rate for teenage boys only went up 115%.

A few years later in neighboring Vienna, suicides went up when they were featured on the front page rand fell 75% when they were pushed to the back page, run sans photos and without mention of the word, “Suicide.” Young Werther, in his blue-tailed coat and yellow vest, stopped chasing the trains of the Vienna underground. 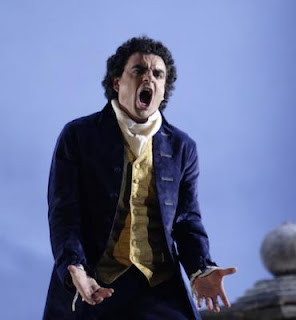 The suicide cluster is a well-known phenomenon, especially among teenagers; it is why the media avoids coverage of teenage suicides… with one exception. A teenager who hangs himself in his garage, jumps under a train or turns on the gas will generally not make the front page or even the back page. But if he takes a gun into a school, opens fire and then commits suicide,  Young Werther will be front page news for days, weeks or even months.

Suicides spike after front page coverage of a suicide. After Marilyn Monroe’s death, 197 more people killed themselves than the statistical norm. Suicides rise even after fictional suicides on soap operas. And murders are also influenced by the coverage of real and fictional murders. The rise in the number of shootings after a heavily publicized shooting isn’t a mysterious conspiracy, it’s Werthers being Werther or Lanza or Holmes.

People are not mere machines who repeat back what they are given, but nor are ideas empty signals shouted into a void. Society is built on such signals. As is civilization. And it is foolish to pretend that the streams of communications that surround and connect those islands do not also influence the direction in which they drift. In a society where fame is the object, media coverage acts as both reward and punishment. And like any other training method, it produces its results.

Stick a photo of a man about to be hit by a train on the cover of a citywide newspaper, and more people will be pushed under trains and jump under trains. Spend weeks making a mass shooter famous and others will decide that resolving their problems with a shooting spree makes sense. Bad ideas are like bad signals, even if disapproved of, they are imitated if they are broadcast loudly enough. And the modern media is a deafeningly loud broadcast mechanism with many hypocritical agendas.

Stephen King, who recently jumped into the fray with his own gun control screed, was credited with inspiring one of the first clusters of school shootings in the United States. To his credit, King has wrestled with the question, withdrawing “Rage” from sale and conceding that it had an incendiary effect on troubled minds. To his discredit, King has used that action to argue that gun owners, manufacturers and civil rights groups should agree to a ban on the mythical assault rifle.

Ideas are more powerful than weapons. Weapons can kill a man, but ideas can cause a man to kill. Nevertheless the United States is a country built on the premise that ideas and weapons should be available to all. We are a country with high capacity magazines of both kinds. That experiment in human liberty is a dangerous one, and even though some Americans get on the wrong track, it is a profoundly worthy experiment because it allows us to choose who we are.

A totalitarian society cannot be moral. It can only be immoral. The few moral people in it retain their morality only by defying authority. In such a society, the Young Werther isn’t a screwup, he’s a saint. In our society, morality is a choice. Even as we drift into a totalitarian consensus that exchanges choice for obedience, individual opinions for mass media and civilian weapons for a police state, the power of choice still allows us to choose the right track or the wrong track.

The American can still choose to push a man in front of a train, kill a class full of children or vote to turn over his freedom and that of his friends, neighbors and countrymen to the state. Those are all choices that come up on the wrong track. The wrong track is the mass track. It is the track of letting the signals make the choices and of a willingness to kill and die just to appear for a moment as a ghost in the media’s fame machine. 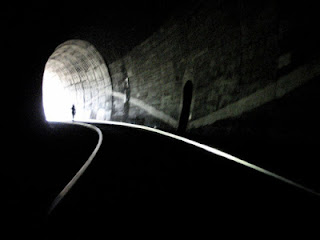 Choice requires a moral culture. It requires a weight of decency to overcome the darker impulses that lead men to take the wrong track. It requires us to think not only of our destination, but how we get there. It demands that we see ourselves not as the train running over a fragile body or as the passengers clumping together for safety while turning over the movement of the train to the driver, but as the drivers of our own train.

A moral society is based on the awareness of choice. Not the empty Wertheresque drama of it, but the knowledge that our choices define our lives and those of our neighbors. They call on us to be good people because the goodness of our society does not come from the law or the state, but from ourselves.

When the American society was hijacked from a consensus of the people and transformed into a top-down programming mechanism, its morality also became a top-down operation, rather than a bottom-up faith, and as the media management has decayed, its mixed signals and the ugly madness that it often broadcasts for its own profit and entertainment have become the ugly madness and mixed signals that lead some of its viewers and listeners to seek fame and power at any cost.

Edmund Burke and the Flies of Summer