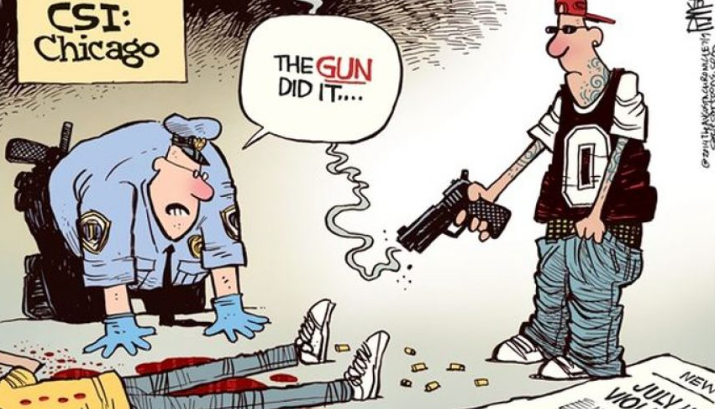 Enough time has past where I can feel comfortable to speak, about this tragedy that know one else noticed, BUREAUCRACY FAILED at every level, and so did we. In the end, this latest school shooting, liberals and the like only seem interested in a much preferred favorite and easy target the NRA and “gun control”. Why is discussing school security and the facilitation of keeping students safe, thwarting shooters and potentially ward off the next tragedy – all without eroding our Second Amendment rights. Liberals have turned the gun debate into a “moral push” even though we should be able to find bipartisan and reasonable solutions.

Let us all point a finger at the media for the nonstop publicizing of these monsters only to make them celebrities And let’s not forget what actually caused the tragedy in Florida, because it wasn’t law-abiding Americans exercising their God-given right to keep and bear arms. Government at every level had played a role in allowing the Parkland massacre to occur, a larger role than we really even knew, and how often has this happened. Details are shocking. Here is what we’ve learned so far…schools failed, local police failed, Florida bureaucracy failed, the officer on duty failed & the FBI failed.  A vicious executioner who might as well have groveled on hands and knees to be seen and stopped ages before he did what he did, and an impotent law enforcement apparatus that still did nothing.

In late February a malevolent, disturbed individual whose name I won’t repeat, and I don’t think he merits the recognition brought a rifle to his former high school in Florida, and proceeded to viciously murder 17 innocent people. The fallout has been as loud as it’s been predictable: Calls for “new gun control measures” – which is often code for “ban guns now” – issued forth across the media before the victims’ bodies were cold. Notably, none of these cries have been so impassioned as those from the surviving students of Marjory Stoneman Douglas High, where the shooting took place. If journalists are to be believed, this brings greater credibility to the arguments themselves.

It always feels inappropriate to talk about politics so soon after a national tragedy like this, but the reactionary attacks on our Constitution we are hearing can’t be allowed to go unanswered. I will say, however, with nothing but love and compassion in my heart, that the survivors of the shooting, while deserving comfort and counseling after the horror they experienced, are precisely the last people we should be listening to about serious policy decisions touched upon by their nightmare. They are angry and frightened, as they have every right to be, which is why they are not able to be constructive right now. It’s also worth noting that the students are just that – students. They are children, still earning a high school education for the very purpose that one day they will be informed enough to participate in important conversations like this. And, that day has not yet come.

The calls for gun control themselves, like most leftist ideas, seem superficially reasonable. We had a horrific shooting, so let’s make guns harder to get. Makes sense, right? Frankly, no, it does not – and here is why.

When you talk about “making guns harder to get”, you’re leaving off the most important part at the end: “for law-abiding Americans.” Perpetrators of mass shootings do not care about getting their guns through proper channels. They’re happy to get them illegally, just like they apparently are happy to commit murder illegally. All that most “gun control” measures can do is make it so that people who actually respect the law will be unarmed when these volatile and dangerous monsters show up, guns blazing.

So what CAN we do? Well, let’s start by not turning a blind eye to a social or psychotic path that may be in our midst. This latest shooter wasn’t exactly a quiet, well-behaved young adult, still a teen until he mysteriously snapped. He had been removed from the school that he attacked for violent behavior and making threats. His former classmates acknowledged that he was the kind of person to do this. The police were called to his home several times. And to tie a ribbon on it, this brazen assassin had posted on social media that he was going to be a “professional school shooter”, over which some vigilant citizen contacted the FBI – and precisely nothing was done, just as with all his other warning signs. This was a wolf in wolves’ clothing; he wasn’t putting up red flags so much as he was flying banners advertising himself a murderer, and still he wasn’t stopped. This animal should have been in a cage – a prison or a psychiatric ward – fifty times over, and somehow it’s the NRA’s fault?

By all means, let’s increase security at our schools. Cameras in the hall, an intercom by the front door to screen people requesting entry after the bell rings, maybe even a remote drone keeping watch over the campus and reporting trouble. All of these are fine ideas, in the interim. We cannot ignore the cries of another teenager who has no one to guide them, no one to hear him, no one who cares enough to listen to them. Schools used to be a place to be safe and secure, that provide the tools, the foundation to grow and learn to be good and eventually great at something, anything. Broaden the mind and spirit, teachers were vigilant and attentive to shepherd in the knowledge of where you were going, Prepare you for a place to share your thoughts and dreams, to excel in everything you do, but now, children get lost in the “push” to move them forward. Ready or not!

United in Hate: The Left's Romance With Terror