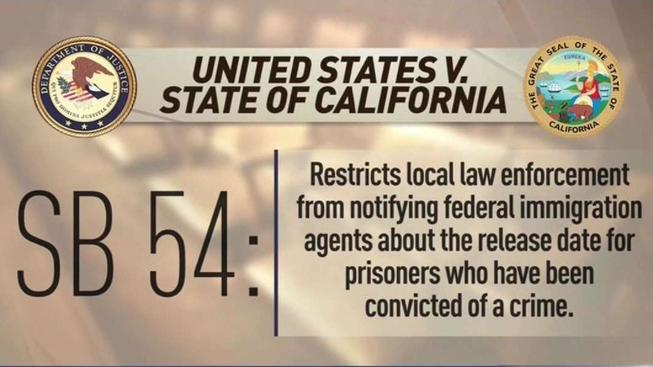 America is often nicknamed as being a “nation of immigrants,” but it is also a nation of laws. Moreover, in the American system of laws, federalism dictates that while states have the right to create laws pertaining to their interests, federal laws likewise exists to create a cohesive nation, particularly in regards to inter-state matters such as immigration.

Recently, U.S. Attorney General Jeff Sessions of the Justice Department is suing the state of California, its governor, Jerry Brown, as well as Xavier Becerra, the Golden State’s attorney general and. In essence, this legal controversy pits politically polar opposites against one another in the clash of the Trump Administrations versus the liberal policies of Brown and Becerra.

Additionally, the Orange County (OC) Board of Supervisors voted to join the Trump administration to challenge California’s sanctuary law. The board held a meeting on whether to join the government’s lawsuit against the state over the law, which bars police in many cases from turning over suspects to federal immigration agents for deportation. The OC board took a strong and BOLD stand and voted 4-0 to pass a resolution that blasts the state’s sanctuary law. “We must be certain that we are not providing assistance to undocumented immigrants who have chosen not to follow the rules. We need to look at every tool available to ensure public safety in the general public and homeless population,” said Supervisor Lisa Bartlett. The supervisors also said they’re going to legally challenge the state’s law in court. Since declaring my candidacy for CA AD 74, I have been calling for a secure border in order to protect law enforcement,  protect and provide safety in our neighborhoods and our children’s safety in our communities and  safe SCHOOLS.

In total, there are three California state laws that the Justice Department finds problematic: AB 103, an omnibus bill on public safety, AB 450, an immigration bill regarding the regulation of employment, and SB 54, this bill that provides specifications concerning the sharing of data among law enforcement.

These laws, have severely curbed any cooperation between federal authorities and local and state police on immigration matters, these state law breakers has allowed deportable immigrants convicted of crimes to be released right back into our communities where they have re-offended multiple times. SB54 -has put limits on communication and sharing of information between local state authorities and federal agencies, such as the United States Customs and Border Protection (CBP), the United States Immigration and Customs Enforcement (ICE) and even the Federal Bureau of Investigation (FBI). Overall, this legislation is an unconscionable effort by our state to hobble the federal government from doing its job: protecting our national borders and our communities.

Since AB-103 is an “omnibus” packaged bill, it includes some features related to re-immigration, and others that are not. However, there are some rather significant points that are authorized. It says in AB-103, “This bill would prohibit a city or county or local law enforcement agency from, on or after June 15, 2017, entering into a contract with the federal government or any federal agency to house or detain an adult noncitizen in a locked detention facility for purposes of civil immigration custody.” Similar requirements are legislated for unaccompanied minors.

In essence, California is trying to build a legal wall of division between the state and federal immigration authorities, while resisting a physical wall between the country and Mexico. Practically speaking, local law enforcement is not just discouraged, but in fact “prohibited” from working with ICE agents in regards to undocumented immigrants that have been arrested for “minor crimes.”

While AB-103 targets local law enforcement and the criminal justice system, AB-450 directs legal attention against both public and private employers. The latter law mandates employers to “not provide voluntary consent to an immigration enforcement agent to enter any nonpublic areas of a place of labor,” unless a judicial warrant is presented. California citizens can quite literally be fined anywhere from $2,000 to $5,000 for breaking this law, which begs the question of whether or not California’s own citizens are judged more severely under state law than illegal immigrants.

Finally, SB-54 also relates to law enforcement in that it repeals presently existing legislation concerning the sharing of data between local law enforcement and federal immigration authorities. The law originally stated, “when there is reason to believe that a person arrested for a violation of specified controlled substance provisions,” and it reasonably believed that the arrested person is not a United States citizen, then “the arresting agency shall notify the appropriate agency of the United States having charge of deportation matters.” No matter if, an undocumented immigrant has broken federal law by crossing the border illegally and then has broken the Controlled Substances Act, a second federal law.

According to Gallup polling data, over half of Americans (59%) have a “great deal” or “fair amount” of concern about illegal immigration. The “sanctuary laws” passed by California lawmakers have added even more concern to Americans. At the same time, many of these same Americans are comfortable with the current levels of legal immigration. Brown, Becerra, and company are creating negative incentives against yielding a greater level of efficiency in legal immigration and are throwing law-abiding citizens under the bus of the anti-federalist laws of California elites.

We have laws in this country for a reason, and it has to preserve order in our democracy. We are a free people, and we have the right to question any law we disagree with openly, ourselves and through our representatives. What we do not get to do is ignore laws already on the books; they are legislating defiance of laws already passed. A situation such as this goes beyond even immigration: this is a blow to the very institution of law and order in America.

The most important and sacred duty of any federal, state and local office – and one of the few things which the state and federal government actually should be doing – is to protect Americans from danger. To do that, elected officials needs to be able to set policies that have been provided by our federal government for travel into the state from foreign lands, so that people wishing to come here to perpetrate acts of terror can be blocked.

We live in an intricately interconnected world, and in the end, all the military prowess money can buy will be useless in ensuring our safety if any random person who so desires can walk, tunnel, climb or fly into our state from a country who sponsors illegal activity such as drug, sex trafficking,  and murder of our citizens.