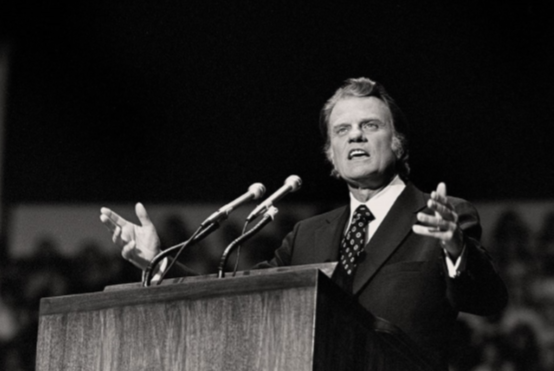 Not being a theologian and knowing that Politichicks has a stable of brilliant writers who are likely on this subject now I hesitated to put in my two cents about “The Nation’s Pastor.”  However our dear editor has invited me to come forth whenever I had a need and after watching the Memorial Service in the rotunda of our Capitol building I felt a need. A need to do what all of us should be, thanking Doctor Billy Graham for his service. I also know that all the ceremony would be daunting to him and not desired as this was an evangelist pastor who was as humble as the great prophets and teachers we have read about in the Bible.

An example of the humbleness this country preacher had  was given in a story in one of his last crusades which we had the pleasure of attending in Nashville Tennessee. Billy told of a learned theologian who lived in a mountain cabin in Europe. One day he was visited by a group of young people with back packs who wanted  to talk with this man about his faith. Looking around his fairly bare cabin one of the young men said, “Sir, you have lived a full life. And yet there are so few personal things we can see around here.” The older man laughed, “May I ask what do you carry in your backpacks?” A young lady answered, “Just a few things, just what we need for our journey.” The reply from the cabin’s owner, “Like you I am just passing through, This is all I need until the end of my journey.” Billy Graham added that that should be true of all of us, we are just getting set for the greatest adventure of all, Heaven. That is where he is now.

Over the past week and in the days ahead we will hear countless times about the hundreds of millions of people around the world who have heard Dr. Graham speak and who were influenced by him. People from presidents and world leaders to every day individuals, rich and poor of all races and ethnic back grounds. There will be endless stories about encounters that saved lives. What stirred us most as we watched the ceremony this morning was the idea of unity.

Among the speakers on TV were members of the Catholic church who appreciated that this Southern Baptist preacher and evangelist believed very strongly that though there may be differences in Christian theology, but we are united by more than we are divided. Especially in our belief in Jesus Christ as our Lord and Savior and the one who brings us salvation. Pope John Paul told Dr. Graham at the end of their first meeting, “We are brothers.” Both men saw a need for Christian unity.   Ah, looking at Republicans and Democrats in that ceremony I couldn’t help but pray for unity to return to our nation. The Satanic driven division of hate we have been seeing both here and around the world could easily make us lose hope.

Billy Graham loved people and our nation and above all he loved God. His was always a message of unity and he well deserved to have the recognition to be the first religious leader to have a ceremony and viewing in the Rotunda. President Donald Trump summed up Dr. Graham’s preaching with our nation’s pastor often repeated phrase, “God loves you.”

Is There Any Room for Compromise Left?