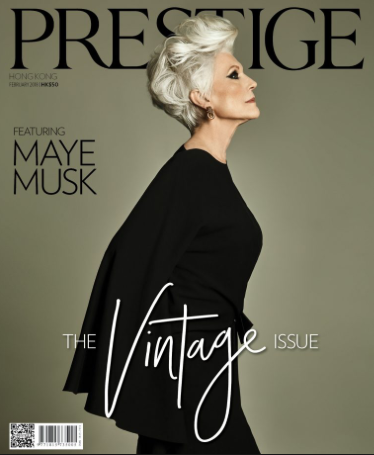 American societal norms can be a curious animal. It is probably why college students take classes called “Sociology”. In most places around the world, the elders of the population are revered. People look up to them and respect them for their wisdom and life experience. In America though, we frequently overlook the senior citizens in our population. We dismiss them, ignore them, younger people don’t really pay attention to them because they are not up to date when it comes to pop culture. They often end up in deplorable conditions.

But one American company is attempting to change the way we look at older Americans, particularly older women. When we think of models, we think of teenage to twentysomething girls who we just want to force feed a sandwich to. They do things like chain smoke and subject themselves to ridiculous dieting habits in order to maintain their refugee-like weight. They are all too aware that their years of modeling earning potential are about as long as Olympic figure skaters and gymnasts have to compete. By 25 they are has-beens.

Enter Cover Girl and their newest spokes model, Maye Musk. Maye may not be all that well known in the U.S., but she ought to be. She was born in Canada, and moved with her family to South Africa at age 2. She began modeling at 15, and entered the Miss South Africa beauty pageant in 1969. Her face has graced the cover of such magazines as Time, New York magazine, and Elle Canada. She is also a Dietician, having earned a Master’s degree in Nutritional Science from the University of Toronto. On April 19, Maye Musk will celebrate her seventieth birthday.

American women have spent most of last 100 years being told what the ideal American woman should look like. She is very young, usually white, and extremely thin. With the advent of the Women’s movement in the 60’s and 70’s, those ideals slowly began to change. The women in those magazines don’t look like the women in the grocery store or at PTA meetings. They might have a few extra pounds; they don’t have hair and makeup people swooping down on them every day before they leave the house. The lines and wrinkles that inhabit their faces tell the stories of real lives. They are Black, Hispanic, Asian, and everything in between. They have jobs and children and some days are lucky if they have time to chug a single cup of coffee before they deal with real life.

It has taken longer than it ever should have for the beauty industry to figure out that beauty comes in all shapes, sizes, colors, and ages. The fact that Cover Girl has put Maye Musk up as one beauty ideal sends a vitally important message to young girls and women in general. In a society and culture where women and girls starve themselves to look like the airbrushed waif on the cover of “Vogue”, watching Maye strut her stuff in a Cover Girl commercial is encouraging, long overdue, and tells women that they do not need to check off the beauty boxes that the culture has brainwashed them into thinking are mandatory. And if you learn about Maye, you learn that the combination of beauty in whatever form it comes in, self-confidence and brains is an unbeatable combination. It will take you where-ever you want to go.

With any luck what Cover Girl has started will spread to other cosmetic companies. American women, especially those who are over 50 are tired of being told that as soon as they reach that magical age they should no longer worry about their looks, that no one is looking anyway. Cover Girl is saying, “MAKE them look.” But the best message comes from Maye herself in a Twitter hashtag,

United in Hate: The Left's Romance With Terror