On Wednesday students across the country participated in a National School Walkout. The intent of the walkout was to protest what is perceived as inadequate gun laws in the United States. I can’t fault these students for the grief they feel over the 17 people killed during the shooting rampage at Parkland’s Marjory Stoneman Douglas High School. I also can’t fault these student for demonstrating peaceably and expressing their concerns. Rampage killers pose a threat to virtually everyone who hasn’t isolated themselves from society in their own custom made bunker. As a parent I too worry about the safety of my children.

Unfortunately though, there is no simple answer or solution to the problem. We live in a world where evil exists. Murder and violence have been a part of the human race ever since Cain killed Abel. It is unrealistic to think society can successfully eradicate homicide. As long as humans exist, there will always be those amongst us that fall into the clutches of Satan. As a practicing Christian, I cannot comprehend how such hatred can exist in a person. How does a person reach a point where their soul has become so demented that they are willing to massacre innocent people? The only conclusion I can draw is that something otherworldly, such as a demon, has taken possession of their mind. Some people may laugh at my view of the world, but I stand by it. Does everything have to be complicated? Sometimes the simplest explanations are best.

We can all agree that it is right to fight against evil. Unfortunately there is no way to predict when and where evil will occur. Trying to predict and prevent tragedies ahead of time would require an unrealistic expectation that every potential violent criminal can be appropriately identified and stopped before they do anything. It’s easy to identify warning signs in a person after they have committed a violent act. It isn’t easy to psychoanalyze every would-be assassin beforehand. The implications are unsettling.

The students who protested on Wednesday asked for 3 things: a ban on assault weapons, universal background checks on all gun buyers, and passage of a law that would allow courts to disarm those who exhibit warning signs of potential violent behavior. The way the media portrays things, the blame for mass shootings should fall upon President Trump and Congress. The problem is oversimplified. The implications of these students’ demands can lead to greater problems. 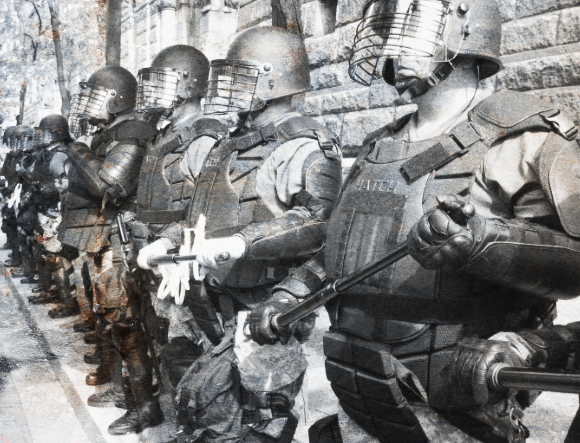 If Americans want to see violent crime greatly reduced, there is a method to achieve it. It’s called a police state. If we gave power to the police to arrest and punish all potentially violent criminals it would definitely result in lower crime rates. If law enforcement were given the power to suspend due process and the freedom to enter and search the home of any suspected violent criminal or anyone suspected to be in possession of an illegal weapon, I’m sure we would see far fewer crimes involving guns. Unfortunately, the ‘safer’ environment would come at a heavy price as our society would start to resemble Nazi Germany instead of the free and open society we currently enjoy.

I personally do not like guns and don’t own one. However, I appreciate the intent of the 2nd Amendment. If we are to ascribe to our Founding Fathers a level of foresight that includes the legality of same sex marriage, then certainly they had the wisdom to understand their own contemporary events. The reason for the 2nd Amendment was the need for an armed populace. Of course they wouldn’t have defended the right of people to abuse firearms, but these were individuals who had lived under British oppression. They, better than us, understood what it meant to live under tyrannical rule. They also knew that no matter how well designed our form of government, the possibility would always exist that it could be manipulated and that instead of serving the people, the government would serve itself. The best possible way to prevent the government from overreaching its boundaries is the existence of an armed populace.

In my mind, the globalist interests served by President Trump’s immediate predecessor as well as the person he defeated to win the Office should give pause to everyone. The media constantly portrays Trump as clueless, inept, and paranoid…not to mention corrupt. His foreign policies are the subject of endless criticism. How dare he look out for the best interests of the United States! The narrative has been consistent and harsh and gets only nastier by the day. From my standpoint it doesn’t take a genius to figure out something is way off. Trump isn’t perfect and he isn’t an eloquent speaker, but I believe he operates independently and because of that has upset the status quo. The media are the ones who don’t put America first, not Trump. It’s their narrative that inspires student protests against guns. What the media fails to do is explain the ramifications of harsher gun control laws.

Is it far-fetched at this point to see the MSM successfully stir up civil unrest? I don’t think so. It’s terrifying but I can imagine a breakdown of society. It would be foolish to think that the rights of American citizens will never be threatened. The Founders understood that freedom must always be vigilantly defended and in order to effectively defend it, the population has to be armed with guns. It’s the harsh reality.

There are a lot of tough issues this country has to address, but we are too divided to do so. I personally can’t think of any reason why someone would need an assault rifle. It wouldn’t be a very sporting way to hunt game. However, those weapons are out there. If they are banned, how would they be confiscated? Would authorities simply search everyone’s home? I draw the line at mandatory searches.

More disturbingly though is the concept of disarming potential violent criminals. This raises some serious issues. If a person has been going around threatening everyone and has a stockpile of weapons in plain sight, by all means stop them. However it’s rarely that cut and dry. What would happen if someone were deemed ‘potentially violent’ because of their political beliefs and by political beliefs I don’t mean beliefs involving violence. One political group could simply eliminate the voices of another political group by having them disarmed. It isn’t hard to accuse someone of violent tendencies. Would the end result be a society in which everyone is in fear of their neighbor accusing them of potential crimes? Where would it end and how would peace be maintained? Wouldn’t the end result be more violence? After all, the guns already exist…how would the government take them away?

The Beauty of Getting Older