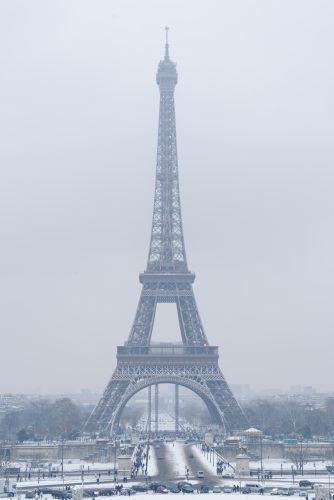 I came across this alarming and very disturbing story this week:

The Eiffel tower turned away tourists on Tuesday as snow swept across northern France, snarling trains and giving the capital its first real dose of wintry weather this season.

And it’s going to get worse!

The Metro France Weather Service says the snowfall will INTENSIFY, leaving 3 to 10 centimetres (1 to 4 inches) in most areas on alert – conditions that could cause headaches for commuters.

“Twenty-eight French departments, including eight in the Paris region, have been placed on orange alert over the dangerous weather conditions and ice on the roads.”

And then the unthinkable:

“That forced the closure of Paris station along a main RER commuter line, which will not be reopened until SATURDAY at the earliest.”

And this is a continuation of whacky weather that has been going on for weeks!

“The cold snap marks a sharp contrast from the weeks of mild and rainy weather across northern France in recent weeks, prompting flooding in several areas and pushing the Seine River to more than four metres above its normal levels as it flows through the capital.

Oh no! Isn’t this EXACTLY what expert non-climate scientists Al Gore and Bill Nye have been telling us global warming would cause – heat, cold, rain and snow (no doubt a drought is next for poor France). The apocalypse is upon us!!! Run for the hills!

The mystery is why this has happened so fast? I mean, the French haven’t done anything to cause this! And we know the sun has NO EFFECT on climate patterns. There can only be ONE possible explanation for this – Donald Trump! His pulling the Unites States out of the Paris Climate Accords has brought the wrath of nature down on France, and soon the rest of us! And we all know “it’s not nice to ‘anger’ Mother Nature”.

So we all better run to the store RIGHT NOW and stock up on bread and milk and be ready for the ice age that is surely coming. It’s going to be bad. Very bad. That I can tell you. The worst ever. Believe me. Believe me!