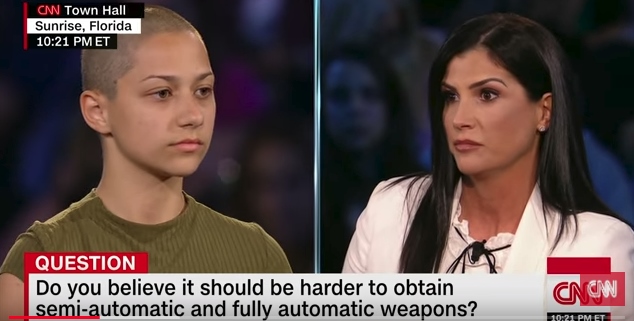 We’ve all heard the old phrase that nothing is certain in life except death and taxes. I believe we can add a third axiom to this – the politicization of tragedy by the left. We saw it again over the past week after the horrific and heart wrenching shooting in Florida. Immediately the left went into their gun-control/blame the NRA and Republicans template. Personally I find it sickening that they have manipulated the emotions of these high school students to advance their political agenda. If you think I am overstating that, read on.

First I present as evidence Debbie Wasserman Schultz. She turned a prayer and remembrance vigil into a political rally. This woman has no shame:

“We must hold other peoples’ elected officials accountable! We must make sure that they hear us! The people behind me, they stand with us on these issues. So we will help lead you to help other communities elect people who will do the right thing — who will make sure no one’s families have to go through this again — and we will stand with you every step of the way!”

Then they turned the meeting of the students with elected representatives in Tallahassee into a Wellstone like rally.

Rep. Carlos G. Smith, D- Orlando: “This week, student survivors from Stoneman Douglas HS are getting on buses and coming for you and I will be there ready to meet them”.

There were the usual leftist slogan signs:

“Kill the NRA, not our kids”

“These kids are braver than the GOP”.

‘Remember the men who value the NRA over children’s lives”. (What about Planned Parenthood?)

Funny how all these signs just happened to articulate leftist ideology.

Then we had the political rally disguised as a Town Hall meeting on CNN.

NRA Representative Dana Loesch appeared at the event but before she could even get on stage, this was directed at her by first year student Michelle Lapido – who was supposed to be asking Senator Bill Nelson a question:

I just want to start with my school is not going to be another statistic in the 18 shootings that happened this year. My school’s going to be the last and the beginning of gun control. Stoneman Douglas is strong and will be heard because our kids and our staff did not die for nothing. They died for change and they died for each other. Their deaths will not be taken in vain but as a calling for the change, gun control and safety in America. They’re watching us from heaven and we are going to save what they died to protect. So, I had a question for Ms. Loesch but she’s not here yet. So for her and the NRA — she’s probably watching — and all of you puppet politicians that they are backing. Was the blood of my classmates and my teachers worth your blood money?

Sorry but this is NOT something a high school student would be asking or saying. Is it any more obvious that these students were coached and this event was rigged?

Then when Loesch did appear on stage, she was arrogantly talked down to by Senior Emma Gonzalez:

“Dana Loesch, I want you to know that we will support your two children in the way that we will not – – you will not. The shooter at our school obtained weapons that he used on us legally. Do you believe that it should be harder to obtain the semi-automatic and – – weapons and the modifications for these weapons to make them fully automatic like bump stocks?”

Any doubts on whether this was scripted? If you watch the video of it you can see her clearly reading it off a piece of paper that was separate from her question. And while Dana Loesch tried to give her answer she was heckled by an audience member as a “murderer” – which of course means that anyone who supports the NRA is a murderer. Amazing how the actions of the REAL murderer was absent from the conversation.

And I have to give Marco Rubio some kudos for going into a situation he knew would be hostile and holding his own. Here is one of the questions/statements launched at him and the exchange:

KASKY: I’m sorry, I know I’m not supposed to do this, but I’m not going to listen to that. Senator Rubio, it’s hard to look at you and not look down a barrel of an AR-15 and not look at Nicholas Cruz, but the point is you’re here and there some people who are not. And I need to ask two things of you. Number one, Chris Grady, can you stand up? This is my friend who is going to the military. I need you to tell him that he’s going to live to make it to serve our country. And then we’ll get to the other one.

RUBIO: Not only are you going to live to serve our country, you and you and all of you have a chance to change our country. Change not just our laws but the way we talk about our laws. So absolutely.

KASKY: Thank you. And guys, look, this isn’t about red and blue. We can’t boo people because they’re democrats and boo people because they’re republicans. Anyone who is willing to show change, no matter where they’re from, anyone who is willing to start to make a difference is somebody we need on our side here. And this is about people who are for making a difference to save us and people who are against it and prefer money. So Senator Rubio, can you tell me right now that you will not accept a single donation from the NRA in the future?

RUBIO: I’m sorry, what was that?

TAPPER: The question is about NRA money.

RUBIO: — so number one, the positions I hold on these issues of the second amendment — I’ve held since the day entered office in the city of West Miami as an elected official.

Number two — no. The answer to the question is that people buy into my agenda. And I do support the Second Amendment. And I also support the right of you and everyone here to be able to go to school and be safe. And I do support any law that would keep guns out of the hands of a deranged killer. And that’s why I support the things that I have stood for and fought for –

RUBIO: — during my time here.

Rubio was trying to give a substantive answer but all the student and the audience wanted to hear was him disowning the NRA. And they wanted to vent their anger at someone. The left has always been good at using victims in this method because it’s a no-win scenario for the target of that anger. But Rubio did a good job at maintaining his composure while holding firm on his positions. Good for him.

You contrast this with the meeting President Trump had with students. He was attentive, respectful and quiet as each one were allowed to share their story. There was understandable anger and sadness. But there was NOT the vitriol that we saw from the CNN Town Hall. Real solutions will be forged from Trump’s meetings. In the end I believe he will recommend several avenues to attempt to prevent future mass shootings. And I believe we will once again see that the Democrats will oppose him like they have on immigration. It will further marginalize them from mainstream America and prove they really don’t want to solve the issue. They could have in 2009-2011 when they had filibuster proof majority in the Senate. They did nothing. Trump will. I believe he sincerely wants to find a solution to this and cares about the students. But the left has played on the trauma and emotion of these teenagers to further their own agenda. The students are just political human shields.

What was that word Hillary liked to call Trump supporters again?