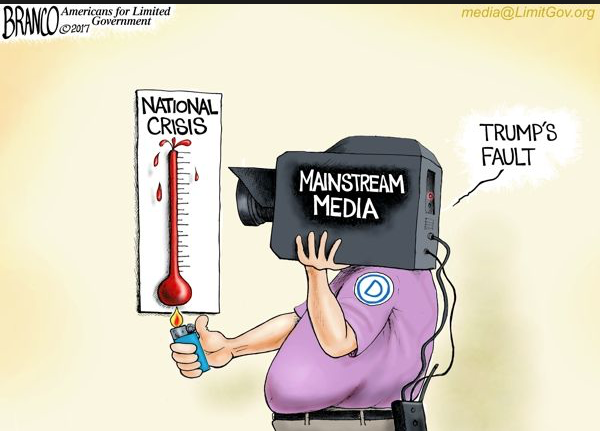 “Television eye before you got me hooked I used to read

Now you’re by my bedside shining empty lights on me.”

If you’re getting your news from the current American media you are under a spell of delusion and confusion. Everything is promoted through the lens of identity politics. People must see the constant negative stories stirring the pot of hate and division. Especially, if you are watching the Communist News Network (CNN) and the other Mockingbird media outlets like MSNBC, FOX, CBS, NBC, et al, that all repeat the same stories over and over as distractions. Many of these news outlets push the globalist open border agenda. To paraphrase the writer Hunter S. Thompson, I would rather be chained to Nancy Pelosi in a Mexican prison than to watch the majority of television news. In addition, reading the standard print media may be an alternative to the purchase of over-the-counter sleep medication.

Blind to reality some people believe all of what they hear and all of what they see. I cannot fathom the lack of an informed debate. Not me, I believe in pursuing more than one source whether I am writing an article or developing an opinion on an issue. Healthy skepticism remains just that, healthy.  Education and the pursuit of knowledge are firmly attached to my everyday life. Free your mind and the rest will follow. I am here on this earth to educate the sheep, not to entertain the goats. I am rarely, if ever, informed or enlightened by the mainstream media. Citizen journalism, such as this magazine, and foreign press outlets are far more balanced to my taste.

So when did the American media become so blatantly dumb?

Let’s keep in mind that after World War II the federal government took over more control of the education system. After the launch of the Sputnik satellite by the Soviet Union on October 4, 1957 there was a huge push for the federal government to take over more control of our education system under the pretense of keeping up with the enemy to provide excellent education and train scientists. They forgot to inform the public about the huge number of NAZI scientists they brought into America under Operation Paperclip. Our government manifested a crisis and used it to expand government control.

Following the path to dumbing down society let us consider the liberal education system. A large portion of the public education system is so politically correct that they hesitate to give a child a failing grade, even if they deserve it. We don’t want to hurt little Joanie’s or Johnny’s feelings so we inflict a grave injustice to our children by curbing their grades and lowering our expectations for their grasp and application of learned knowledge. Colleges are liberal bastions and sanctuaries with a few rare exceptions. More and more of our teachers contribute to these problems. A shame, as my life and work has been greatly influenced by some remarkable teachers.  History changes before our eyes as textbooks are changed to fit the warm fuzzy inside of a new liberal communist agenda.

Abbreviating, as opposed to reading, is encouraged in both a subliminal and literal manner. Parents and their children stare at their phones like the phone itself is some glowing God. They text, instead of talk. Broad based conversations are like barely remembered fireside tales. When was the last time we took our children to the library? Not necessarily a blanket indictment, as I do see toddlers taken to my local library in fair numbers. But where are the adolescents? Where are the young adults? The number of patrons at the library are far less than the potential for deductive reasoning that exists within it’s walls.

So the lack of a balanced educational system is part of the foundation for an incompetent media. The other avenue to consider is the 24 hour news cycle itself. Newscasters have become members of a cult of personality that desperately avoids any real and balanced content. They just need to fill the next hour. The days of newscasters writing their own copy is largely over. People are handed a script and taught to flash that perfect smile into the cold lover lens of the camera.

As viewers we have been cursed with such images from O.J’s Bronco to Court TV. Television cheapens and exploits tragedy for the sake of ratings. They have to fill that content for the advertising dollars. No matter what the cost is to the better side of our souls by viewing that content.

Additionally, if a news story does not support a network’s agenda, they rarely cover it in any detail. The Benghazi attack was and is the most important and personal example for me.

Can you count on one hand, with maybe three fingers missing, the amount of news stories in the mainstream media that were broadcast about the 2012 Benghazi attack? Fox, to their credit, covered Benghazi extensively. Their news stories did support my own personal thesis that Obama was an incompetent madman and Hillary Clinton was America’s Lady Macbeth in the before, during and aftermath of the Benghazi attack

So here we are in 2018. What of the media’s current coverage of President Trump in comparison to his predecessor?

First, most of the mainstream media gave Barrack Obama a total pass as far his background was concerned. His radical associations, his fanciful re-telling of his childhood and his few accomplishments were not appropriately addressed by the media. Instead he was promoted as a post-racist, post-partisan, brand new political figure. In reality, he was a specter, a cypher, an illusion created by the post-Jim Crow guilt of America. Fake news was created to promote a false narrative. Hillary Clinton was promoted by the media as “breaking through the glass ceiling” without any real reporting of her distinct lack of accomplishments.

In his book, “ The Big Lie,” writer Dinesh D’Souza wrote the following about President Trump, “ Not since Lincoln has an America President faced greater resistance to his legitimacy than Trump.” I sadly agree with Dinesh and it angers me. No matter the level of my anger towards former President Obama, I never denied his position as America’s President.

The fact that President Trump has consistently faced gross unfairness in the mainstream media’s news coverage is amazing to me. The strident limitations of the media has lead to blatantly untrue stories such as the Russian collusion story. The media chooses to ignore President Trump’s triumphs such as our consistently growing economy and improved Veterans healthcare, among other accomplishments. They choose to ignore the fact that America is greatly respected by friends and adversaries alike for the first time in my lifetime. The exceptions are countries with a strong socialist or radical Islamic bent. Democracy is scary to the fool that lives in the shadows. They also ignore the fact that ISIS is truly diminished and on the run.

Today’s mainstream media promotes the criminal and pays tribute to the reprehensible. They ignore the victims and the heroes of our society, such as our Armed Forces. Regretfully, I see very little change forthcoming in the patterns of behavior of America’s media that has been diminishing since the 1990’s. They exist today, hand in hand, with the New World Order.

So what can we do with the fake news outlets and the continuing dribble? Turn off that TV and do your own homework. Read, analyze and perceive. As I stated before, education is forever. Knowledge is power. Know your enemy.