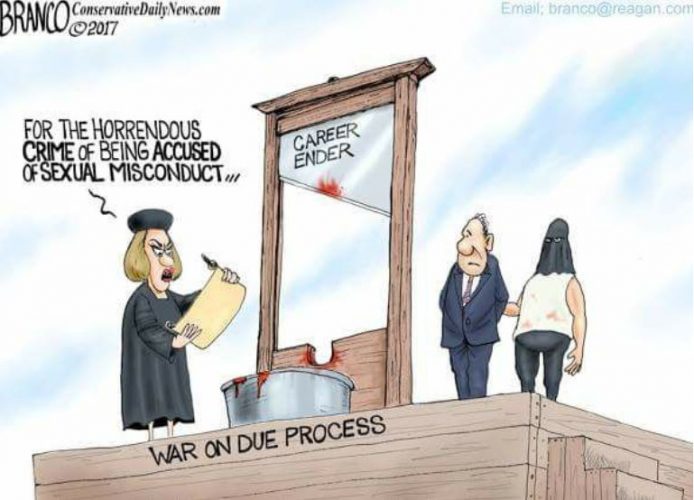 For nearly the past one hundred years, the Progressive movement has been slowly and steadily infiltrating most of our beloved American institutions; universities, the public education system, the media, Hollywood, the NFL, as well as our government– with the ultimate goal of destroying our Western way of life.

Using the current #MeToo —rush to judgment campaign, they now have their sights on the American Justice System.

The “Believe the Victim” investigations and the “Trauma Informed Police Training” are replacing impartial investigations, which have been the very bedrock of our American Justice System.

This is the worst thing to every happen to our justice system as our due process rights are under assault as well as our right to a fair trial.

The Progressives behind the #MeToo camp are to thank for this push as they attempt to put a finger on the scales of justice. We’ve recently seen the story of Aziz Ansari unfold. His job, his life, his reputation all threatened in this #MeToo-Twitter Rage-Rush to Judgement-World… all because he had a bad date with someone of the #MeToo Mentality.

PolitiChicks recently interviewed Attorney Michelle Owens, an expert in University Title IX cases (who defends due process rights of students on college campuses). She is also a spokesperson for Stop Abusive and Violent Environments (S.A.V.E.).

“The #MeToo movement jumped the shark with the Aziz story, and it’s just one of many examples that I’ve witnessed in court and colleges where it clearly demonstrates why you can’t always ‘believe the victim’ and why we need fair and impartial judges, juries, and especially police investigations.”

Sadly, the movement to change the very core of the American Justice System  is receiving backing by both Democrats and Republicans. S.A.V.E.  and CPI Center for Prosecutor Integrity  recently wrote a letter asking Senator Cornyn to stop his “trauma-informed” funding bill. This movement has momentum, and it’s frightening.

Owens explained how the #MeToo movement is working to undo the justice system:

“It’s not just one specific thing. It’s just this movement, it’s like a big wave that is gaining power, and anything in its way is getting swept up. The innocent people along with the guilty people, it’s all getting thrown together.

What they (people who are in support of the #MeToo campaign) are also doing, is introducing legislation that would actually make it a law that you have to believe the victim. This is so unbelievable to me because what it is, is a complete waver of due process, just for sexual assault cases. And they introduced a law where they would do this in the criminal justice system.

It’s basically saying that you believe the victim and you go into believing everything the victim says and not believing the other side of it. I’m not saying that you don’t want to treat the person with respect. But it’s supposed to be a completely unbiased investigation that people on both sides get all the information out there and they are all made aware of the information.”

“It is basically believing that the woman has been raped or sexually assaulted. So you take everything that she says and you filter it through that methodology.

For instance, if the timeline doesn’t add up, or if the information the woman has told you is incomplete, or if you get information from other witnesses that contradict what she says, it proves that the woman was assaulted or raped. Because, they call it “trauma brain,” which is based on junk science. It’s not even a real thing. They are saying that because the woman was raped and assaulted, she was so traumatized that things are all mixed up in her head. So, when you get incorrect information from a woman, or information that tends to disprove what she’s saying, or even disproves that it’s the person she says assaulted her, what that is, is proof that it happened because she would not be so confused unless that were the case.

It’s very difficult for the accused to defend themselves against that. Basically, you are going at it from the perspective that the woman is telling the truth and that it did in fact happen. A lot of the flyers and training that are given out to the people doing these investigations say that is what they need to do. That they need to focus on trying to prove these cases in court. This also goes to police stations. Investigators focus on what the prosecutor would try to do or would need in order to make this case happen and look at defenses that are going to come up and try to undermine those. And if they have inconsistencies that tend to disprove what she is saying, they are told to leave those out of their report. They are only include the inconsistencies that help her case. So, it’s really like a witch hunt.

Believe me,  I have a young daughter, I would want that guy thrown in jail. But let’s be fair. I also have a son and I would for there to be due process. If he did it, let’s throw the book at him. But let’s make sure he did it before we throw the book at him. In fact, I have two cases right now where the guys didn’t do anything. Literally, I think the girl has them confused with somebody else. And the guys are being charged. So, what do you say to them? There’s no way for a young man to protect himself.

Sadly, what also happens– is that the real victims get lost in this.  It’s just so unfortunate. You know, there are people like me who are saying, “Wait a minute, you’ve got to be fair.” And then it filters down to one side or the other and you can’t be on side or the other because you have some cases where things really happen and you have other cases where they didn’t. You’ve got to be on the side of truth. And if you are on that side, sometimes you are going to believe the victim and sometimes you are going to believe the one who is accused.”

As Owens pointed out:

“In America, if you are accused of something, you have the right to being innocent until proven guilty. And that’s the key phrase there. The prosecutor has to prove that you are guilty (or in the school situation, the school has to prove that you are guilty). You are not in the position of having to prove that you are innocent, and that is what this whole movement is doing. It is flipping it to put the burden of proof on the accused to prove they didn’t do something. That is very hard because you often don’t have all of the facts. You are really in a bad situation of trying to defend yourself for something that you don’t get all the information about. It’s a completely impossible situation. It’s supposed to be an impartial investigation but all that has gone out the window.”

“The main thing that I try to tell people is that “#MeToo” or “Believe the Victim” sounds really good on its face. Because why wouldn’t you believe the victim? But you have to remember that when you say “Believe the Victim,” you are beginning down a very slippery slope of taking away due process rights.

I like to compare it to the First Amendment because most people understand this. Everyone knows that in order to have free speech in our country, we have to let people that we completely disagree with, say things that we would spend our lives to defend. We have to let them say this and speak their opinion, because then we don’t get to speaks ours either. It’s the same thing with the #MeToo and “believe the victim”. We want to believe people who are victims. But if you go down that slippery slope of denying due process, then pretty soon we are going to be in a police state where there is no due process afforded to anyone. You are really looking at taking away basic Constitutional rights and you are slowly eroding them.

So, if you take it away in one area (like in sexual assault cases where we are always going to believe the victim), and you let the government start controlling that, then that’s what’s going to start happening in every area. Our justice system is one thing that really sets us apart in our society and gives us freedom. We are now talking about making changes in that, and we cannot allow that to happen.”

Michelle Owens and S.A.V.E. believe strongly in the bedrocks of our American Justice System. That’s why they have just recently issued a special report calling on investigators to eliminate biased investigative methods in sexual assault cases.

For More on Michelle Owens and S.A.V.E. go to www.SaveServices.org

What Has President Trump Done for Women in His First Year?

The Devil Is In the Details