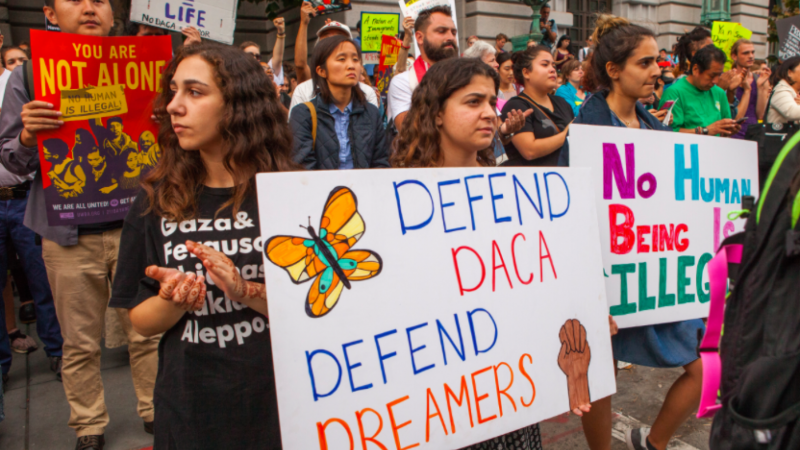 On Thursday the United States Senate failed to pass immigration reform thanks to Democrats and a handful of elite Republicans. Four separate bills were voted on:

As usual Chuck Schumer didn’t miss a chance to weigh in:

This is just priceless. The people who have stood in the way are Democrats who are unwilling to bend at all on this issue. Trump offered to compromise with a path to citizenship for the Dreamers in exchange for the wall and stricter controls over immigration. That was just too much for the left who needs those votes in order to have any chance of winning future elections. They have left the Dreamers out to dry twice now.

And as far as Trump terminating the program, what he actually did was reverse an EO that was illegal and sent it back to the legislative body to fix it. I thought Trump was a dictator like Hitler. Can you Democrats make up your mind?

Now, on the other side, you had 12 Republican Senators voting against it. There were the usual suspects like Susan Collins, Lisa Murkowski, and Jeff Flake who like the cheap labor aspect of illegal immigration. Rand Paul and Ted Cruz also voted against it as they opposed the path to citizenship for the Dreamers.

So where does it go from here? March 5 is the deadline Trump set for solving the DACA issue. Many on Capital Hill don’t think he’s serious:

Elania Plott: “I have heard from a lot of House sources today that nobody is really taking the Trump-imposed March 5 deadline seriously anymore. Especially with the Senate failing to act, there’s no urgency.”

I think they disregard Trump to their own peril (like they’ve done many times before). And Trump is in a position of strength here. Whatever happens, he will wrap it like an albatross round Democrat’s in the mid-terms. He has also exposed them as being hostage to their fringe, radical base who want total amnesty and total open borders. Neither of those are popular with the public. Trump’s position is. He holds the winning position and will continue to do so unless the Republicans on Congress manage to screw it up. And unfortunately, that is entirely possible.

Florida School Shooting: Who's to Blame?