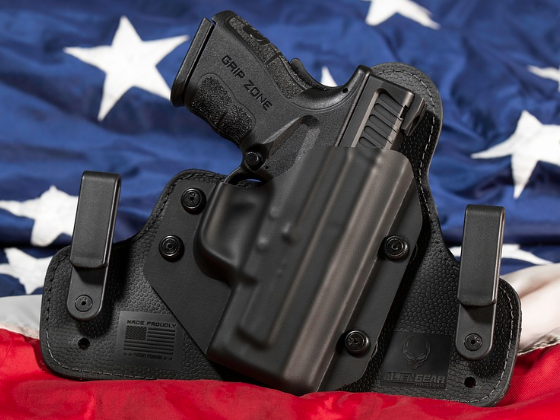 There are some perennial topics in politics that will never go away and will never be solved: death penalty, abortion, euthanasia… and the debate about guns is one of them. No matter what you say, you will be attacked by the other side. In fact, if you venture into the political arena, these questions (and your answers to them) will immediately make up the mind of the electorate one way or the other – and no matter what you say subsequently, you will be “branded.”

At peril of being attacked, I must voice my support for the Second Amendment here. I grew up in a truly socialist country, which means no Bill of Rights, one Party without opposition – and anyone who opposes what the Party decides will be jailed. The most privileged “right-wing” intellectuals were cast into uranium mines (yes, wherever Russia expanded, the first thing they went after was always uranium – the first sign of their dominance – then the rest of the nation’s industry).

Our ancestors had sharpened flints, spears, then knives and swords. As weapon development progressed, guns appeared and every Medieval gentleman had to know how to shoot, and every “modern” gentleman (17th century onward) craved a weapon – mainly for self-defense, because: what will you do if the other guy has it?

I always recall that scene with Indiana Jones (Harrison Ford) where the protagonist stands in a public square facing a local villain, expert with a machete, then says something like “I don’t have time for this…” and shoots him. I must have seen that movie a hundred times and it never gets old.

It was also shot back in the 1980s and brought America to me – as a brave, fresh country, where guns were not just for self-defense but a means of making a living, getting by in the world. To have a gun and know how to use it was something diametrically opposed to the “peaceful” society I grew up in, where people were totally defenseless and the police could enter your home at any time for any reason and arrest you, take the whole family away in the middle of the night, imprison you all, even kill you, and no-one would be any wiser in the morning – nor allowed to ask any questions!

There is also the global point of view, that of the world hegemony. We may argue that what kept the world at relative peace during the Cold War was the comparative equality of nuclear power. It can be likened to two cowboys with equal firing power in a face-off waiting for the other to shoot. It is a subtle balancing, rationale, and self-preservation always wins (except in the movies). I emphasize: equal firing power and ability to kill the other. What is more, if you live by the sword, you will die by it – an injudicious first attack almost always leads to self-annihilation (viz. Hitler).

Speaking of swords: if we ban all guns, what if a madman determined to kill shows up in a defenseless school with a machete? Unless there is an Indiana Jones with a loaded gun, you are a toast. Those who kill will always find the means. What are we going to do next – ban pressure cookers? Rush Limbaugh correctly pointed out that schools are just about the only “gun-free zone” there is left. Everywhere else in public areas, such as courts, banks, airports – all we see are armed men guarding us. You are only as safe as you are ready for the next attack.

Finally, we have sufficient laws on the books. It is virtually impossible to obtain a gun here in California, yet there are several shootings every day only in Los Angeles. Every time I watch the local channel, there is at least one. Laws are not the problem – criminals are! In Parkland, it was the lack of follow up by the FBI that contributed to the tragedy. The same had happened in Boston, Fort Hood, San Bernardino. In France, the it is impossible to obtain a gun for a law abiding citizen. Yet, the terrorists had machine guns when they attacked Charlie Hebdou. I will never forget that picture of the French police officer kneeling on the ground on the street and the terrorist shooting him in the head! I have also seen 12 policemen in England running away from a crazy Muslim wielding a machete – because none had a gun or even a knife on them! Disarming the population is the first step to not only subduing it by its own government but, eventually, overturning its government and being subdued from the outside.