Following the GOP and President Trump’s sweep tax reform, passing Congress in December, the nation will witness the kind of tax cuts employees in middle class, working families deserve in our country today. After years of living under a tax code that prioritizes the government over the people that comprise our nation, the President is making a stand with the hard working employees that toil day-in and day-out, only to have part of their 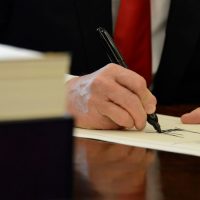 paycheck siphoned out by local governments. California is in a tight job market and being one of the highest taxed States in the Nation there are more jobs available than there are workers to fill them. That forces employers to offer higher pay to attract and keep workers. However, is it too early to call this a trend but the breakout in wage growth is very welcome news?

Of Course the only negative aspect for California’s economy is the biggest gain last month was seen in government, which added 10,300 jobs. The trade, transportation and utilities sector and the mining and logging sector were the only sectors to see job losses last month. Boosting the revenues of local governments, unfortunately once again, we have been shackled a medicine ball to our economy’s ankle at the first beacon of light to a prosperous New Year.

Oh and locally, employers added some jobs as well.

Let’s begin with families of four earning $75,000 per year will see an income tax cut of more than $2,000, slashing their bill directly in half. Close to 90 percent of the nation’s employees will see more take-home pay this month, rightfully labeling February as the Month of Hope. Additionally, Trump set the corporate income tax rate at 21 percent, and lowered the top tax rate for individuals from 39.6 percent to 37 percent.

As Trump stated, “Our current tax code is burdensome and unfair. It has exported our jobs, closed our factories, and left millions of parents worried that their kids will have less opportunity than they did.”

Trump’s tax cuts will deliver more jobs, higher wages, and comprehensive tax relief for all American families. The hard working people of this country deserve to keep their dollars, investing it as they see fit in their families, homes, and businesses today. The president believes that Americans deserve the money their families need to survive and thrive in our expanding economy. He could not be more correct.

During his State of the Union Address President Trump too pride in the strong economy, tax cuts and wage growth. Good news may have lead to foreboding news for one of his favorite barometers of his presidency — the stock market.

Stock traders recognized early that the recent market decline is due in part to the wage data and bonuses surging out shortly following the tax cut plan, adding fuel to fears of inflation. President Trump’s Federal chair, Jerome Powell, may well find himself leading the central bank in a clash against rising prices by raising interest rates.

The Month of Hope marks the beginning of what will be years of a flourishing economy, increased job creation, and lower unemployment for every demographic. It is time for a tax system that was created with the American people in mind.