The Democrats have a bold plan for fighting Russia. 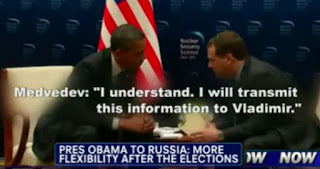 Accuse Republicans of treason, eavesdrop on their conversations and send them to jail. Overturn the outcome of a free election because that it had been tampered with by “foreign interests.” Demand that tech companies censor dissenting media outlets spreading “fake news” to protect “democracy”.

Good work, comrades. The bold plan is to fight Russia by… becoming Russia.

State surveillance, endless investigations and locking up political opponents under the guise of fighting foreign influences is how Vladimir Putin does business. It’s how they do it in Turkey, Venezuela and Iran.

But these days it’s how the Dems do it too.

Totalitarian states aren’t really fighting foreign influences. They’re suppressing domestic opponents. The Democrats, who were for appeasing Russia before they were against it, are doing the same thing.

The same gang of commissars, czars and apparatchiks that giggled when Obama wrote off Romney’s warning with, “the 80s called and wants their foreign policy back” now sees Russians under every sofa. Hollywood, which still weeps for the industry’s victims of McCarthyism, launched a “Committee to Investigate Russia” by Rob ‘Meathead’ Reiner and Morgan Freeman. After several months of trying, the Committee members have finally found Russia on a map and are ready to reveal their findings on CNN.

Do any of these people actually care about Russia?

What have they done to check Putin’s geopolitical ambitions? What do they plan to do about the Ukraine or Georgia? Nothing. Their administration dismantled missile defense and gave Moscow everything it wanted. If the Dems get back into the White House, they’ll do it all over again with even more uranium on top.

And CNN and the Washington Post will go back to claiming that weakness is really a strength.

Their only answer now is to mumble about sanctions. Sanctions were a favorite tool of the Obama administration because they were a mostly worthless excuse to do nothing. There was never any fallback plan for what to do if sanctions failed. And when they did fail, there was no Plan B.

All the CNN hawks and the Democrats who suddenly care about Russia still have no post-sanctions plan. They have a plan to get Trump out of the White House. They have no proposals for Putin or Russia.

The leftists who can’t stop “Russianing” all over the place don’t want to fight Russia. They’re using it as a pretext to go after other Americans. The “Committee to Investigate Russia” and the rest of it is a shoddy pretext to lock up Republicans by a political movement that has been appeasing Russia since the 1930s.

After almost a century of appeasement, the doves have suddenly turned into bellicose hawks. And they’re eager to do anything to stop Russia, except build up our military, but they will fight Putin to the last Republican. And they’ll go on fighting until they win another election and freedom dies for good.

If you believe them, Russia’s Facebook posts pose a greater threat to democracy than the entire Communist movement did during the Cold War. And Russian bots are a more dangerous weapon than the nuclear bomb. The ideological movement that protested the execution of the Rosenberg atom bomb traitors would like to send everybody who ever spoke to a Russian to prison for twenty years.

Locking up people for meeting with foreigners was the sort of thing they did back in the Soviet Union.

No mainstream political figure during the Cold War spoke seriously of removing the President of the United States from office. The one member of Congress whom we know spied for Russia, a Democrat, retired comfortably into the bosom of his party’s political machine. Senator Ted Kennedy, who sent a collusion letter to Moscow to prepare for his presidential bid, never suffered any consequences.

His great-nephew even delivered the Democrat response accusing Russia of being “knee deep” in our democracy.

But it’s the Democrats that are “knee deep” in tyranny.

That’s when they mumble something about “interference in our elections” and then go back to studying diagrams of Trump hotels in Kyrgyzstan or Alma-Ata. The interference consisted of $100K worth of Facebook ads and some hacked DNC emails. Or they call it in Chicago, Wednesday.

It was never about Russia.

Shouting “treason” isn’t how you fight foreigners, it’s how you delegitimize your political opponents. Sometimes they might be illegitimate traitors. But most of the time the traitor-shouters just want an excuse for getting rid of their political opponents. Domestic politics has limits. War doesn’t.

If your opponents are traitors, you can spy on them, entrap them and imprison them. You can overturn elections, censor the press and take any measures you need to defend against a foreign threat.

And that’s exactly what the born-again Communist patriots of the left are doing.

To save us from $100K in Facebook ads and their own hacked DNC emails, they had to eavesdrop on Trump officials, bring them up on charges and run an endless investigation of the President of the United States. Obama and Clinton supporters in the IRS, State, the FBI, the DOJ and the NSA broke a few rules. But they were protecting us from the Russian menace lurking in Trump Tower.

Just ask Putin. It’s how he does it. It’s how every dictatorship does it.

Waterboarding the mastermind of 9/11 is not “who we are as Americans”. So said the politician whose regime spied on members of Congress, pro-Israel activists, reporters and the Trump team. But Muslim terrorists didn’t represent a grave threat to Barack Obama and Hillary Clinton. Republicans did.

To Obama, ISIS was just a jayvee team. The worst it could do is kill a few thousand Americans and a few million middle easterners. The left’s real enemies are the ones that threaten its policy agenda.

The definition of treason is one important difference between a free country and a totalitarian state.

Treason in a free country is a threat to the nation. In a totalitarian state, it’s a threat to the ruling class. The tighter the tyranny, the narrower that definition of treason becomes until it’s reduced to one man.

The American left rejected the presidential victories of George W. Bush and Donald Trump. It treats Congress and the Supreme Court as illegitimate institutions because it doesn’t control them.

Legitimate government in its eyes doesn’t derive its authority from the consent of the governed, but from its ideology. Any elected officials who don’t believe in global warming, open borders, freeing criminals, socialized medicine and appeasing terrorists are traitors against the authority of the left.

Tyrants accuse their enemies of treason to the nation, when what they’re really charging them with is treason against their politics. It is the enemies of tyranny who are true patriots while the tyrants are the traitors. And so the tyrants have to portray the patriots as a foreign threat.

The average lefty stopped caring about Russia once it stopped being the motherland of Socialism. You couldn’t get Bernie Sanders to honeymoon there again if you offered him his choice of Stakhanovite brand underarm deodorant in icy gulag or spicy radioactive varieties.

Russia in America now serves the same function as America in Russia. It’s a casus belli for delegitimizing the supporters of a free society as catspaws of foreign interests who must be suppressed. Like 1984’s Oceania, Eurasia and Eastasia, leftist interlinked tyrannies collaborate even while they pretend to fight each other as a pretext for repressing their own populations. Or as Obama once told Russia’s Medvedev, “This is my last election. After my election, I have more flexibility.”

The left would like this to be the last election so its leaders can have maximum flexibility.

The political movement that once took its marching orders from Moscow doesn’t want to stop Russia. It wants to pretend that its political reign of terror, the illegal eavesdropping, the investigations, the censorship, the sudden raids against its political opponents, and the rest of the KGB tactics are a necessarily evil in the face of a “constitutional crisis”.

There’s a constitutional crisis and it isn’t Russian bots. It’s the left.

Now the Democrats are signaling that they’ll have to suspend all of it to deal with this “crisis”.

The left doesn’t want to fight Russia. It wants to turn Americans into Russia.

"Love is Love"? Time to Add An “I” (for Incest) to the LGBTQ Banner