There were many damning revelations in the Nunes memo released by a House Intelligence Committee vote. But the most damning of them all doesn’t raise questions about process, but about motive. 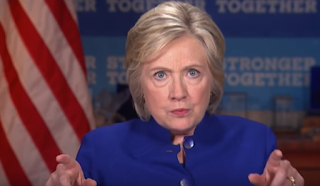 The memo told us that the FISA application would not have happened without the Steele dossier. The document known as the Steele dossier was a work product of the Clinton campaign. Not only was Christopher Steele, the former British intel agent who purportedly produced the document, working for an organization hired by the Clinton campaign, but he shared a memo with the FBI from Cody Shearer, a Clinton operative, listing some of the same allegations as the ones in his dossier. That memo has raised questions about whether Steele had been doing original research or just dressing up a smear by Shearer.

A redacted memo by Senate Judiciary Committee members Chuck Grassley and Lindsey Graham also states that there was a second Steele memo based on information that Steele had received from the State Department and which had been passed along by “a friend of the Clintons.” Victoria Nuland, a Clinton protégé and top State Department official who helped cover up the Benghazi attack, recently went on a media tour in which she revealed that Steele had passed along his material to State.

Shearer and Nuland are both Clinton associates. Under President Clinton, Nuland had been Strobe Talbott’s Chief of Staff. Shearer was Strobe Talbott’s brother-in-law and his connection to the Clintons.

Not only was the Steele dossier a work product of the Clinton campaign, but the State Department, which had been run by Hillary Clinton and staffed by many of her loyalists at the top, had been used to route information to Steele from the Clintons, and then route information back from Steele. Clintonworld had not only paid for the Steele dossier, but influenced its content and passed it around.

The media’s counterattack against the Nunes memo rests on the argument that while the FISA applications didn’t mention that Steele was working for the Clinton campaign, they admitted that the dossier had a political origin. Media apologists and Never Trumpers have acted as if an admission of political origin to the FISA court is some sort of rebuttal of the Nunes memo. It obviously isn’t.

There’s a world of difference between admitting that the dossier came from a “political” source or that it came from the campaign of his greatest political opponent who was obsessed with destroying him.

The media apologists and Never Trumpers have churned out echo chamber articles claiming that courts routinely evaluate evidence from biased and tainted sources. If so, then why not tell the court?

If admitting the truth wouldn’t have made a different, then why not admit the truth?

There were only two reasons to withhold the information about the origins of the Clinton-Steele dossier.

1. Fear that the court would have viewed the Clinton origins of the dossier as disqualifying.

2. Concern about exposing the Clinton campaign’s funding of the dossier.

Either the DOJ and FBI deliberately misled the court. Or they were colluding with the Clinton campaign.

The Nunes and Grassley/Graham memos both make it clear that Steele was playing a double game, acting as an FBI source while spreading the Clinton dossier through the media. And the FBI chose to ignore these abuses until it could no longer do so. The double game was criminal and political.

Steele was spreading the Clinton dossier through the media to taint Trump politically. But he was also working with the FBI to go after Trump with a criminal investigation. The information was withheld by the DOJ so as not to expose the fact that his paymasters were actually in the Clinton campaign.

Were the DOJ and the FBI covering up the origins of the Clinton-Steele dossier to protect the criminal investigation or the political campaign? The refusal to crack down on Steele’s media leaks (not to mention the plethora of leaks coming from within the FBI and DOJ) suggest that it was the latter or both.

Admitting a political origin on the FISA application suggests they were less worried about the court than about the public exposure of their actions. And that’s the situation that they find themselves in now.

The Clinton campaign had taken great care to conceal its ownership of the Clinton-Steele dossier. Having a law fire hire a smear firm which then hired a British former intel agent in another country indicates that the campaign was spending a lot of time and money trying to cover its tracks. It wouldn’t have needed to work so hard just to protect the distribution of opposition research to the media.

There was never any shortage of reporters eager to cooperate with Clinton officials. Would the same insider media that allowed the DNC to review articles and ask for changes have really refused to keep the origins of the Clinton-Steele dossier a secret? Even if the reporters who were briefed by Steele didn’t know that he was working for the Clinton campaign, they could have guessed it from their contacts.

The eavesdropping and the Mueller investigation aren’t unintended outcomes, as the apologists want us to believe, that a zealous Steele triggered by passing the information to the government.

It had always been the intended outcome before Christopher Steele even officially came on board.

But because the campaign was underway, the dossier was a double game. Spreading it through the media acted as classic opposition research while routing it through the DOJ generated an investigation. And the Clinton campaign used Steele to do both. His Fusion GPS handlers ferried him from briefing reporters to briefing the FBI. And the FBI was obligated to keep his secret the way that the media did.

Short of an email hack, there’s no way to get at what a reporter knows. The Los Angeles Times still has Obama’s Khalidi tape locked up. The recent release of a photo of Obama posing with Farrakhan which had been kept locked up for over a decade, and the media’s subsequent refusal to report on it, shows just how impermeable the media’s black wall of silence is. But that’s not true of government agencies.

Government agencies have to respond to orders from the President, queries from members of Congress and even requests from the public. The investigation of the Clinton-Steele dossier was met with stonewalling at every step of the way, but it is yielding results that would be impossible in the media.

The origin of the dossier was omitted to conceal it from conservative activists and politicians.

Would telling the truth about the origins of the Clinton-Steele dossier to the FISA court have been disastrous? Let’s take the word of the media apologists and Never Trumpers who insist that the court would have shrugged. And considering the inclusion of a Yahoo News article (also allegedly generated by Steele), that’s entirely possible. The court was stacked with Obama appointees. The acts of judicial activism that defied the law to undermine Trump have gutted the credibility of the Federal judiciary.

But if the DOJ and FBI weren’t hiding the truth from the judge, they were hiding it from everyone else. They were protecting the dual media smear campaign run by Fusion GPS which was parading Steele in front of selected insider reporters. And they were protecting the public perception of the investigation. If everything had gone as planned, bias might have been suspected, but never proven.

The real question about the concealment of the origins of the Clinton-Steele dossier isn’t whether disclosing it on the FISA application would changed the outcome. That’s a serious legal question that may have a major impact on those who failed to disclose it and on the investigation even if the court response would have been the same. But the real question is, what was the motive for concealing it?

Why did the leadership in the DOJ and the FBI cover up the role of the Clinton campaign? They weren’t protecting intelligence or sources. They covered it up to protect their political allies.

The omission of the origins of the Clinton-Steele dossier is an admission of guilt. It shows that these were not the routine abuses that can occur in an investigation, but that the investigation was politically motivated. A cover-up reveals not only a crime, but the motive for which the crime was committed.

The missing information is evidence of the collusion between the DOJ and the Clintons.

Hate Fanaticism Could Destroy Our Nation