After a tumultuous season in the NFL, the year ended on a positive note with last weekend’s Super Bowl. The Philadelphia Eagles captured their first Super Bowl Championship with a 41-33 victory over the New England Patriots and Tom Brady (considered in many circles the Greatest of All-Time). The game masked the furor that had cast a shadow on the NFL this past year with the protests and kneeling. Fans left the game in droves and it remains to be seen whether they will ever come back. It doesn’t look likely at the moment with a commissioner who appears to have turned a blind eye to the fact that his league’s popularity is in free-fall. It will be interesting to see what fan base the XFL draws in 2 years.

But while the lights were dimming on the league, a greater light, THE light, Jesus Christ, was glorified during the Super Bowl. Isn’t it interesting that after all that has transpired this year that Christ would be the lasting image and topic of discussion. It’s almost as if it was divinely planned.

The story of the Christian fellowship on the Eagle’s team is inspiring (and I am saying this as a Cowboy’s fan for gosh sakes!). It starts at the top with the head coach. I was very happy to hear that the first words out of Doug Pederson’s mouth were a praise to Jesus Christ. And there are many players on the team who are not ashamed to proclaim their faith in the Risen Savior:

Torrey Smith: “I went to church often growing up, but it wasn’t until I was in my last year of college where I realized I was kind of living off everyone else’s salvation. I wasn’t really finding out things on my own. I wasn’t diving into the Word or exploring that the way I was exploring everything else around me. That’s when I kind of realized I was living the wrong way”.

Nick Foles: “I want to be a pastor in a high school, It’s on my heart. I took a leap of faith last year and signed up to take classes at seminary. I want to continue to learn and challenge my faith. It’s a challenge because you are writing papers that are biblically correct. You want to impact people’s hearts.”

Foles had almost decided to leave football 2 years ago when he lost his starting QB job and later was released by the Rams: “The reason I decided to come back is I’ve loved the game of football since I was a kid, I loved playing sports, I loved being part of the team, and I knew as a person that more growth I’ve had and the more opportunity I would have to glorify God and trust in Him would be to go back and play football”.

Foles had been with the Eagles in 2012 – 2014 and had been a leader on the team as a role model. Teammate Kanu Grugier-Hill said of Foles, “Guys like Nick and Wis can spit out scripture all day and it’s awesome to take in that knowledge”.

Carson Wentz: “As the leader of a football team I’m gonna lead everybody the same. And it kind of makes it open. I think guy’s are willing to talk when you don’t have this self-righteous attitude about Jesus. You’re just open to talk about spiritual things, talk about religion, talk about real life issues.

Carson Wentz has also founded a Christian ministry called “Audience of one” (A01) which uses Romans 5:8 as it’s creed: “But God demonstrates His own love for us in this: While we were still sinners, Christ died for us”. 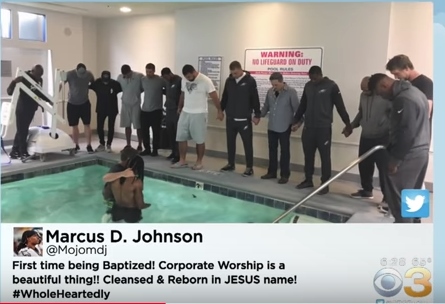 And last year WR Marcus Johnson was baptized with his teammates supporting him around the hotel pool.

Of course there are other teams and players who aren’t ashamed to proclaim they are Christians as well, like Russell Wilson or Drew Brees.

When you think about it, the football field is not so different than our everyday life. We all face challenges and setbacks. Victory and defeat. But through it all Jesus promised to be with us.

Chris Collingsworth made perhaps the best statement regarding the Philadelphia Eagles when he said they were “relentless”. So was Jesus. He was relentless in healing the sick and the lame. He was relentless in demonstrating love and forgiveness to the sinful. He was relentless in calming the storms. And yes, he was relentless in exposing the corruptness of the religious leaders of that day. But most of all, He was relentless in His mission to save humanity through his sinless life and death on the cross as a payment for our sins. He stands at the door and knocks. Do you hear Him and will you let Him in? He offers the greatest (and lasting) prize of eternal life with Him through his death and resurrection. All one has to do is accept that free gift of salvation.

The Super Bowl is over and the Philadelphia Eagles are this year’s champions. But where you spend eternity is much more critical than the outcome of a football game. And we can rest assured in the knowledge that there is Victory in Jesus. He IS the Greatest of All-Time.