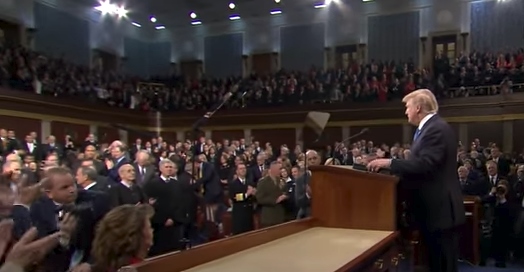 I was going to spend some time writing about the Democrats’ reaction to President Trump’s State of the Union Address but all they did was pretty much sit on their rear ends all night, which spoke louder than any words. After months of telling us how Trump is a misogynistic, homophobic, racist dictator who had the mind of a small child, the American people got an eyeful without any of the normal media filter.

It was obvious that Trump was the adult in the room and the ones with small minds were Democrats–and they were also shown to be the hypocrites they are. The Congressional Black Caucus sat motionless on the good news about low employment among the African-American population (of course this is BAD news for them because it means they aren’t needed). Nancy Pelosi looked like she was chewing on a lemon. Which from her point of view she probably was. Trump has totally out witted these people who think they are so smart. The funniest part of the speech was when Trump got to the point about prescription drugs and waved at them to stand up! The master was in complete control.

So since the Democrats didn’t provide much fodder, I decided to go to the next best thing – the Hollywood left. They are never shy about telling us backward hicks in the heartland what they think whether we ask for their opinion or not.

Here are some of the deep, profound thoughts coming from those intellectuals:

Elizabeth Banks: “I tried. I listened but the amount of BS and stunts and questions raised that will never be answered made me throw my remote and now I am listening to Tom Petty and am a better American for it.”

“PS not all immigrants are in murderous gangs, one did my hair color today – I don’t really need to say this, right?”

Jeffrey Wright: “Can’t even watch this vile, deceitful fraud and his bizarre cult of self-interested sycophants.”

Now, now now. The Democrats can’t be all THAT bad! (Actually they are!).

George Takei: “I’m not watching some frothing orange gorilla read off a teleprompter. I’ve got better things to do, like alphabetize my spice cabinet.”

Says the man who calls for tolerance yet called Clarence Thomas a whitey in black face. I liked him as the character Sulu on Star Trek but in real life this man is a mean and angry person.

Mark Ruffalo: “Standing up for the most vulnerable and voiceless among us is the noblest of traits. We must be noble & support our immigrant youth by demanding a DREAM Act. #StateOfTheDream.”

Trump’s plan calls for a pathway to citizenship for 1.8 million Dreamers. How uninformed can you be? And the most vulnerable and voiceless among us is the unborn American children.

Actually what has hurt the “communities of color” is illegal immigrants taking their jobs. You know, the people you support. Get a clue.

That pretty much sums up what the media does in their reporting.

Al Gore: “There is no war on American energy. America should lead on clean energy! Smart leaders are tapping into this unprecedented opportunity. Doesn’t @RealDonaldTrump know that US solar jobs are growing 17X the average job growth? #SOTU”

There is no war on American Energy because Trump ENDED it. And there’s no more global warming either. Trump ended that too!

Ashley Judd: “America is at its best when we unite to support one another, and work towards a common goal of togetherness. #StateOfTheDream”

You mean like this?: “But yah, I am a nasty woman?! A loud vulgar, proud woman. I’m not nasty like the combo of Trump and Pence being served up to me in my voting booth. So if you [are] a nasty woman or love one who is, let me hear you say, “HELL YEAH!”

Pat Sajak posted his hilarious take on the speech: “What a great prank! Somebody put glue on half of the seats at State of the Union Address!”

And finally, the ramblings of a man who ceased to be relevant a long time ago (if he ever WAS), Rob Reiner. Known as “Meathead” on “All in the Family”, this may be a rare occasion when someone’s fictional character transforms itself into real life:

“The guy is a racist. He’s a misogynist, and he is a pathological liar. Now here is what interesting about this State of the Union tonight, a pathological liar is somebody who can’t help but lie. He just lies all the time. We know that to be true about Trump. But when you write the speech down, and you lie with words that are prepared, that takes lying to a new level. He lied about the biggest tax cut in history. He lied about the Visa program. They’re just lies. It’s one thing to lie off the cuff, but when you write down a lie and you say it, how are we supposed to judge what we just saw there? It was ridiculous.”

The perfect response to these statements was given by Sarah Huckabee Sanders: “I think if Americans cared what celebrities thought then Hillary would be president, but they clearly don’t.”

Jamie Glazov: The Most Pathetic Moment in the Peterson vs. Newman Debate