Our 45th president is anything less than a truly unique masterful individual, and a president unprecedented for his effectiveness. A New York City real estate developer Donald Trump America’s president, a billionaire businessman; he should not be taken lightly. President Trump’s critics are fanatical, pompous elitists; there is no way around it. The New York billionaire who never held a political office has repeatedly proven them emphatically wrong.

Why do California Republicans oppose President Trump, is it fear, panic that the Democratic lines have been drawn solidly by Pelosi, Boxer, and 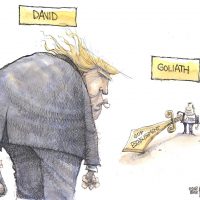 Brown that they have hoodwinked the California voters, with the GOP being just as far in bed with the enemy as the Democrats today. The Republicans have done nothing to answer the calls from their constituents. They have remained quiet and behind closed doors. Trump won the White House through transparency and honesty. Maybe it is time these so-called “public servants” take a page out of his book.

Some blinded by hate of our President, politicians such as McCain and Graham are willing to set aside their political futures as their loathing seethes from their mouths. The media narrative is still captivating those who are not able to form their own, original thoughts.

Trump’s magic wand has given us an invigorated U.S. economy actually driving the total of all global GDP forecasts higher. The U.S. economy has gained momentum over the past year thanks to pro-growth policies of lawmakers in Washington. The major U.S. stock indexes are all trading around record levels. The President’s tax reform is considered one of the critical elements for the amplified economic growth. Since he negotiated, the biggest deal of his life with those voters who felt they had lost the American Dream, the stock market reached record highs 70 times —a historical first. An estimated 42,000 new jobs promise to be created thanks to the President’s efforts to create energy-independence via the construction of the Keystone XL and Dakota Access pipelines. Unemployment is 4.1%, and the number of people collecting unemployment benefits is the lowest that it has been in 44 years. Black unemployment is the lowest it has been in 17 years and Hispanic unemployment is at a record lows. Yet, the hate continues.

Comfortable, unstoppable and always cheering “Trump” nothing but President Trump’s army the Silent Majority behind him. The man who up until the night of the Election all of the smart and highly regarded folks assured the country he had virtually no chance of winning, smashed into the ranks of the has-beens of America’s political dynasties and some of the most influential movers and shakers in the world.

Townhall columnist J. Krewick said it best: “It isn’t just the Democrats  and Republican Party Establishment(s); over whom Trump prevailed; he defeated the Deep State; a hostile, dishonest FAKE media; the immoral degenerate entertainment industry; academia; and let us not forget the unyielding George Soros and his street-vermin thugs;  who attempted to alter the outcome of an American election.” A year later, in the face of a relentless onslaught of overwhelmingly negative, outrageously FAKE vilification by most of the media, the President continues to double down, in pursuit of his vision, his agenda to Make OUR America Great Again.

“Whether one likes or dislikes Trump, only the willfully blind or the apathetic will refuse to admit that the man is cut from exceptionally rare cloth.”  There are the few people in human history that possess the fortitude, pluck, and spirited determination today that could endure the constant barrage of attacks to which to realize America’s 45th President true strengths, he is a leader for America First.

“Trump, the David to his enemies’ Goliath, beat them all.”

Can Black People Be Racist? Depends On Who You Ask