At no point during my lifetime have I been as afraid for the future of our country as I am now. Given the advances in technology, the ability of a few to dictate what the many should believe, and the propensity of a growing number of people to accept what they told rather than scrutinize all sides of an argument, I can envision the emergence of a dystopian United States. This country is massively divided on a great many issues and that doesn’t bode well for our future. Abraham Lincoln said it best when he remarked “A house divided against itself cannot stand.” Lincoln’s comments were aimed at addressing the issue of slavery but they could just as easily be applied to the divisiveness that exists in modern day America.

President Trump represents a nationalistic view of the United States and his opponents represent a globalist view of the United States. Lincoln accurately predicted the ultimate outcome of the slavery issue and his logic is equally applicable to today’s circumstances: the United States “will become all one thing or all the other.” Americans on both sides of the issues feel passionate about their beliefs and as we have seen, violence and tragedy can erupt at any time. Like Lincoln, I believe this country will endure. Eventually one side will prevail. It’s all a matter of how and when.

Senator John McCain’s recent op ed in The Washington Post is in many ways representative of the current split in the way Americans think. If you haven’t read it, McCain called upon President Trump to “stop attacking” the press. This is no surprise. Trump offended McCain and undoubtedly many others by criticizing the fact he was captured during the Vietnam War. I can’t defend Trump’s comments about POWs and I can’t fault McCain for feeling the way he does. I respect the man and I pray for his health. At same time however, especially in politics, there comes a time when you have to let go of personal animosity for the sake of the greater good and/or things you believe.

Regardless of his distaste for Trump, can McCain really point to The Washington Post and call it friendly to conservative causes? I found his criticisms of the President to be unfair and his support of the press to be undeserved. Here are McCain’s key observations in his op ed:

Trump’s ‘fake news’ awards discredit the free press and encourage foreign leaders to suppress journalism. If POTUS is willing to question the integrity of the press, it gives repressive regimes the justification to follow suit.

The assumption here is that the American press is operating in good faith and adhering to professional standards. If their articles were limited to reporting events, not expressing opinions, one could make this argument. Journalistic integrity would also demand equal coverage of all public figures. If they want to scrutinize Trump over every detail, the same should be applied to the Clintons, Obama, etc.. Personally, I prefer the term ‘heavily biased’ as opposed to ‘fake’ but either way the press has discredited itself. The fact that our press is independent does not mean it operates prudently or ethically. Further, repressive regimes will attack the press…that’s what they do. Plus, if the press wants to attack him, doesn’t Trump have a right to fight back in the proper manner? I see no problem with Trump verbally attacking the press. Doesn’t Trump have a responsibility to project a strong image to the rest of the world? Wouldn’t that include defending himself and attacking his enemies?

Worldwide, 2017 saw 262 cases of journalists being jailed for expressing their views. Some countries label the press as an ‘enemy of the people.’ Under the guise of national security and morale the press is bullied in many parts of the world. 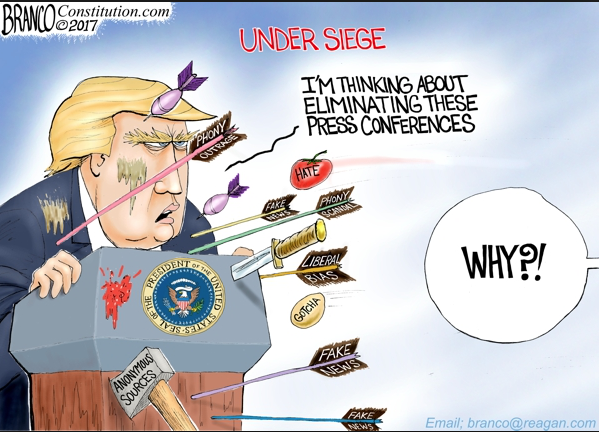 The press regularly depicts President Trump in a highly negative light. This includes questioning his mental fitness, reporting on events that transpired in classified meetings, depicting him as a racist, questioning his ability and fitness to lead our country, criticizing his foreign policies, implying he colluded with Russians to fix the election, etc… etc…

Has Trump jailed any journalists? Has he ordered FBI raids of news organizations? He he threatened to kill any journalists? No, No, and No. If nothing else, if I were a journalist in another country I’d be inspired by the freedom enjoyed by the American press corps. They have free reign to bash the head of state without any repercussions. There are many times when I feel our free press reports things that do pose national security threats but no one has stopped it. Freedom of speech still reigns.

In countries such as Russia and China the press is constantly censured. In places such as Britain, France, and Germany surveillance laws have either been passed or considered. People have been murdered and/or fined for exposing government corruption in other countries.

We might as well identify Trump as Jack the Ripper and D.B Cooper if we are going to blame him for oppression in Russia and China. Britain, France and Germany are all sovereign nations. They don’t answer to Trump. If we are to believe Trump needed Russian assistance to get elected President, how can we expect him to shape policy in other nations?

More importantly, who would you rather upset? Trump or MSM? If anyone is guilty of bullying and persecuting people it’s the press, not Trump. If one fails to adhere to political correctness MSM will do all it can to ruin them and face no consequences. The great irony is that it’s the press who tries to suppress the President’s right to free speech, not vice-versa.

America has always been the world’s leader in supporting human rights and democracy. If Trump is unwilling to support the press, it falls to Congress to promote freedom of speech around the world. This includes U.S. aid to foreign media outlets in an effort to make their reporting more diverse as well as programs designed to help people view the press from a non-political standpoint.

It most certainly does not fall upon the U.S. to support foreign news organizations. It’s fine to promote conditions conducive to free press, but a press that is funded by a government, even the U.S. government, is by definition not a free press. The key feature of the American Press is that it is independent from the government. Only NPR receives public funding. Our government has no business funding foreign news organizations. It is crossing a serious line and will invariably be associated with propaganda.

A free and independent press is vital in supporting and protecting democracy.

I totally agree with this sentiment. In a perfect world the press should act as a sort of unofficial fourth branch of government. Let the people elect our leaders. Let our leaders do what they were elected to do and let a free and unbiased press monitor our leaders. Unfortunately, news organizations are controlled by a few large corporations. As a result, news organizations serve multiple interests and their reporting is influenced by things other than an oath to seeking the truth, no matter where it may lead them. Contemporary media cannot be counted on to serve its role in our democracy. The only hope is that news organizations with no predefined liberal or conservative agenda will emerge and return the role of the American press back to its intended role as biased organizations fade away.

Trump’s form of nationalism isn’t something evil. He is a businessman. In a business, the CEO’s job is to do only one thing: Maximize profits for the shareholders. It may mean doing tough things like shutting down stores and laying off people, but a good CEO can’t worry about that. The goal is to make money, not run as a charity. If you want businesses to run that way, we wouldn’t be surrounded by the fruits of capitalism today. Trump’s expertise at business translates into government. He sees his primary duty as being to the voters. To him, American citizens come first. That is whom he serves. It may not look pretty, but his job isn’t to protect illegal immigrants. His job is to enforce the laws. We can’t nitpick at what we do and don’t want him to enforce. It’s ok to be a proud American. Life isn’t always fair, but it doesn’t mean we must feel guilty. It isn’t fascism.

Liberals would have us to believe that our differences make us stronger. No. If you stranded a farmer, a doctor, a hunter, a blacksmith, a teacher, etc… (i.e. people with unique and mutually beneficially skill sets) that share a common national identity and purpose that would be a case of differences making a group stronger. They could unite to survive in the wilderness.. If it’s people with radically different social, economic, and religious views you end up with a group of people with no collective identity…people who are suspicious of one another. How can America worry about global issues when it has yet to conquer its domestic issues?

The first step in a stronger America is restoring our national identity. If we don’t start learning how to act as one, how can we interact with others? I believe in a Trump’s vision. I just wish the press did too. Rather than inform us, I fear the press is leading us towards the inevitable conflict predicted by Lincoln.