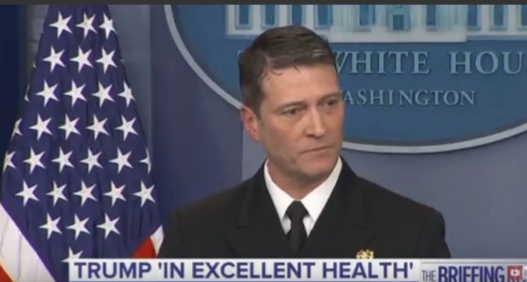 On Tuesday, the President’s physician held an almost hour long press conference to address President Trump’s health and to answer any questions the media had. The overall report was that Trump is in excellent shape.

Some of the subject matter discussed was the President’s mental fitness for office:

“So, many of you may have picked up on the fact that we did do a cognitive assessment as part of the exam. Initially I had no intention of including a cognitive assessment in this exam because, to be honest with you, per all the guidelines that are out there, it’s not indicated at this time. So I had no intention of doing that because I didn’t feel like it was clinically indicated. And part of the reason I didn’t think it was clinically indicated is because I’ve spent almost every day in the President’s presence since…last year when he got into office. And I see him everyday. I’ve seen him 1, 2 sometimes 3 times a day because of the location of my office. We have conversations about many things, most don’t revolve around medical issues at all. I’ve got to know him pretty well and I had absolutely no concern about his cognitive ability or neurological function. So I was not going to do a cognitive exam. The reason we did a cognitive assessment is plain and simple: because the President ASKED ME TO DO IT. He came to me and said ‘Is there something we can do, a test or some kind of screening we can do to access my cognitive ability.’”

“We picked one of the ones that was a little bit more involved, it was longer, it was the more difficult one of all of them. It took significantly longer to complete but the President did extremely well on it.”

The fact that the President got 30 out of 30 on that exam, there’s no indication whatsoever that he has ANY cognitive issues. (YOU can take the test yourself here).

That crash you hear is the media narrative of the last 2 weeks going down in flames. Michael Wolff is VERY lucky his book came about before this checkup.

Didn’t Trump already tell us that about himself? It ain’t bragging if it’s true.

“As far as I know no President has never had a cognitive assessment as President of the United States.”

Is the President fit for duty?

The liberals no doubt had the vapors and headed for the fainting couches on hearing that! I love it.

“No not at all. There are many good things to take from the exam…he had great findings across the board but the one that stands our more than anything to me is his cardiac health. His cardiac health is excellent.”

I can’t believe no one ask about his 2 scoops of ice cream!

“I’d say based on his cardiac assessment, hands down, there’s no question he is in the excellent range. And that’s not me speaking, that’s objective data.”

“Objective data”. That phrase is an oxymoron to the liberal media.

On the President being stressed out:

“I’ve never seen the President stressed out about too much…He has a very unique ability to get up in the morning and reset.”

The media hate that. He should have crawled up in a ball in a fetal position by now.

On some of the “remote” assessments made by psychiatrists indicating Trump is unfit to be President:

“People shouldn’t be making those kind of assessments about the President unless they’ve had the opportunity to get to know him and examine him. In my opinion that’s just tabloid psychiatry.”

“Twitter doesn’t involve me as a doctor. I have no concern on that.”

And after almost an hour explaining that the President is in peak condition both mentally and physically (but does need to exercise some), one of the last questions was this:

Can you address drug addiction?

“He has no drug addiction.”

It was obvious the media was totally defeated at that point.

Overall this was probably the worst day the press has had since election night of 2016. Not only is Trump physically fit, he is 100% mentally competent as well. And the best thing: he bragged that he was already!

Now, let’s have people like Chris Matthews (who appears to have restless leg syndrome) or Joy Behar (who has restless mouth syndrome) undergo the same cognitive test!

The #MAGA Tour Bus: It's More Than What You Think It Is