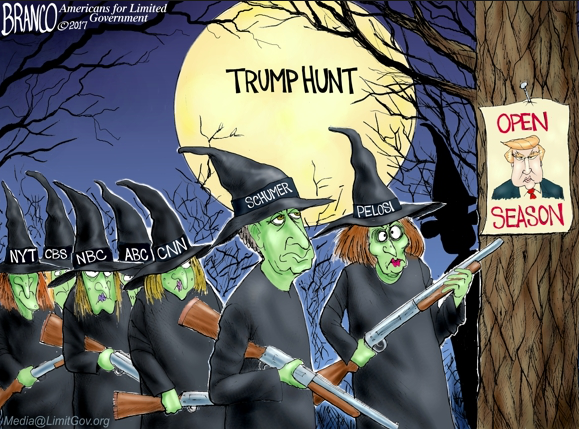 For fifty years, Liberals had cornered the market on mainstream media. Once upon a time there were only three networks reporting the news. They were free to set the narrative of the day on any story they wished. They were almost literally free to tell the American people what to think on any given issue. For a very long time the only conservative you might see on TV was the late great William F. Buckley. And as brilliant as he was, and as much fun as it was to watch him take down any liberal brought before him, he was usually limited to the friendly confines of public television. But with the advent of the Internet and conservative news outlets like the Fox News Channel, the beginnings of conservative talk radio with Rush Limbaugh, and websites like The Drudge Report, and Daily Caller, conservatives were finally gaining the voices they had been denied.

But as with most things in the age of Trump, things for conservatives have changed dramatically. While supporters of Donald Trump are enjoying watching the economy take off, and a President who has obvious love for his country and puts it and its citizens first, the traditionally liberal mainstream media has its collective panties in a such a bundle that they can no longer hide not only their hatred and contempt for the President, but conservatives in general.

Recently, James Damore, a former Google engineer filed a class action lawsuit against the tech giant for discrimination. He claims that Google is actively discriminating against white conservative men. Also, according to a recent article on the “Daily Caller” website by Tech and Law reporter Eric Lieberman, Google has now added a “fact-check” feature when conservative leaning websites or publications are searched for. It seems that liberal leaning websites like the Huffington Post and Daily Kos do not get the same sort of scrutiny. And not to be outdone when trashing conservatives, Project Veritas’s James O’Keefe has come out with a new undercover video featuring Twitter employees explaining a practice called “shadow-banning”. If a conservative tweets out something, it can be banned and left in the dark so no one sees the content. This is apparently done by algorithms. What was also revealed was that there are approximately 50 identifying key words for “redneck”. Just exactly who gets to define redneck? Is this supposed to somehow be synonymous with “conservative”?

So quite a few questions come to mind, are we to believe that these are the most tolerant and inclusive among us? If that is the case why are they afraid of someone who might have a different point of view? Are these titans of social media also convinced it is their job to tell Americans what to think? Have they heard of a little thing called the First Amendment? Just exactly what is so intimidating about conservative views that they must protect Americans from them? Could it be because of the fact that Conservatives have come of age having to know early on how to articulate their views. They have had to be prepared at any moment to defend their arguments, and they have had plenty of opportunity for practice.

If you ask your average conservative if when liberals say something that they disagree with, they will most likely tell you that yes, they absolutely disagree with it, but they have the right to say it. They do not babble on about boycotts or shutting people down/up. Try finding that attitude with a liberal. Best advice; do not hold your breath while doing it. In the age of conservative media, liberals are having a tough time defending their positions; they had never really had to do it. Well, in the immortal words of that great political pundit Oprah Winfrey, their time is up.

The presidency of Donald Trump and the ascendency of conservatives is scaring the hell out of the Left. Make no mistake about it nothing will be off the table in terms of bringing down the president and those who support him. The ends justify the means. It is quite literally for them a matter of life and death. But this should not keep conservatives from standing up and speaking out again, and again, and again. Be brave, be bold. Andrew Breitbart once told an aspiring blogger, when asked for advice for someone just starting out and taking their first steps into the political fight he told them, “Get in their face”.

Definitely words for conservatives to live by.

President Trump Gets a Clean Bill – of Health