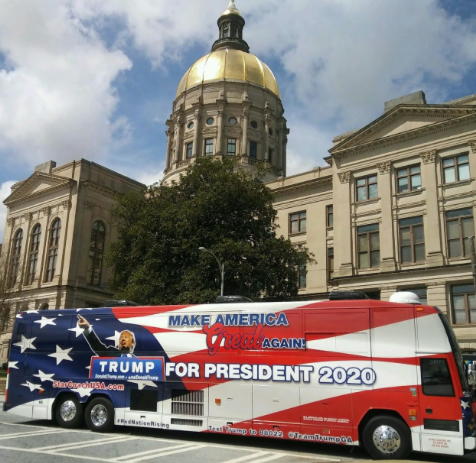 When I was asked to write a story about a bus with a “Trump for President” wrap on it, I never would of thought that it would, at all, be an interesting article, but continue to read and I believe that you, too, will be excited about this particular bus and the men behind it.

Back during the 2016 campaign season, Lenny Solomon reached out to his long time friend of 20 years, Danny Hamilton, and started a discussion on Facebook that led to quite the adventure. You see, Mr. Hamilton owns and operates Star Coaches, Inc., which is a premier rock and roll tour bus business consisting of nearly 60 buses. For nearly 30 years, their clientele have been some of the largest rock and roll bands in the country. These are not your run of the mill, Greyhound travel buses, they are outstanding state of the art buses, that any high-end rock and roll band would feel incredibly comfortable in, while touring the nation doing their concert tours. These buses are equipped with up to 12 bunks in each one, I can’t imagine how these bunks would leave room for anything else, yet there is more than enough room. There are two lounges in each bus equipped with a large flat-screen TV, DirectTV in motion satellite, Wi-Fi, a refrigerator/freezer, microwave, bathroom, and plenty of storage everywhere. Each bunk has its own private TV and 110 volt outlets to plug in any gadgets you may have need of to work or enjoy as you comfortably ride.

To purchase, the cost ranges from $650,000.00 to $1,200,000.00, however, daily rental ranges from $400 – $750 per day, plus fuel and driver. So, having strong Donald Trump supporter, Danny Hamilton, take $12,000.00 of his own money, and wrap one of these 45-foot “Goliath” with the sacred Red, White and Blue of our Star-Spangled Banner, promoting the campaign and messaging for Donald Trump, the outcome couldn’t have been any better, and because Star Coaches, Inc. is based out of Atlanta, GA, Danny and Lenny began their state-wide tour there, promoting the man they chose to champion in the 2016 elections.

Believe me when I say that that was no small task.  Both men sacrificed their time, and money to make this happen, and it paid off in the end. During the Georgia Republican Party election night extravaganza they witnessed along with the rest of the nation, the underdog, their champion of the people, Donald J. Trump win the presidency of the United States of America. After all the dust settled from the election these two good friends decided to see who would be interested in taking a “road trip” to the inauguration in said bus. The response was so overwhelming that Danny added six more rock & roll buses for the trip to Washington, D.C., for a total of seven buses; a great convoy.

Danny had graphics printed for the additional six buses, which read, “Make America Great Again!” Can you imagine, the jaw-dropping look of seven 45-foot long, Rock & Roll buses, in a convoy rolling from Atlanta, GA to Washington, D.C., branded with “Make America Great Again!” and being led by “The Trump Bus.” With a combined length of over a football field long, the Trump Bus Convoy took Washington D.C. by storm.

Lenny told me, and chuckled while doing it, that at first, they didn’t think they would be able to get enough tickets for their crew to attend, as they had exhausted all of the Republican politicians and connections for extra tickets. Then it dawned on him, that it was a no brainer to just start calling Democrat politicians for tickets, as it was common knowledge that many of them were not going out of protest and bias feelings against the president elect.

Needless to say, it was a lot easier than expected to achieve getting the amount of tickets they needed to get their whole crew there. In essence, it was the Democrats that made it possible for this huge moving billboard of support to not only make it to D.C. for the inauguration, but to give all the Trump supporters a great way to add to their celebration while in Washington for the historical event, getting pictures taken next to a patriotic bus with the Presidents name branded on it and walking away with free bumper stickers, and other swag as souvenirs.

Danny decided to take a cut with his annual revenue by not stripping off the bus wrap and not putting the bus back into his business rental rotation, which means he is losing out on a $500.00 a day rental; truly a sacrifice. What’s more, now this fantastic bus has gotten a 2020 facelift, and will be at the South Carolina Tea Party Event in Myrtle Beach on January 20, 2022. Come and be one of the first to get your picture in front of the newly fashioned 2020 Trump bus and a President Donald Trump cardboard cutout, and walk away with your own souvenirs. As you meet the two wonderful patriots, Lenny Solomon and Danny Hamilton, face-to-face, you’ll hear their story and have a once in a lifetime opportunity to look inside of this Rock and Roll tour bus.

You can learn more about Danny and Lenny and their story on YouTube by watching HERE:

President Trump Gets a Clean Bill – of Health

Can Black People Be Racist? Depends On Who You Ask