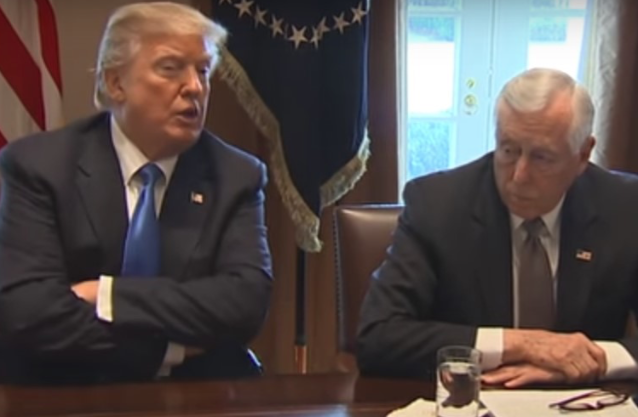 Those of us who have followed the immigration issue for a long time have known that the sole interest the Democrats have in advancing amnesty is to increase their voter base. Without the Hispanic vote they would have a very difficult time winning elections. This is made even more pronounced now that President Trump is reshaping their other means of winning elections – the courts. So it is no surprise to see this exposed in a memo leaked to the Daily Caller. Some highlights:

“The fight to protect Dreamers is not only a moral imperative, it is also a critical component of the Democratic Party’s future electoral success. Donald Trump and the Republican Party continue to jeopardize the futures of millions of Dreamers and their families and throw up roadblocks to meaningful legislative reform, and it is up to Democrats to stand up for them.”

Political Translation: ““The fight to protect Dreamers is not only a moral imperative, it is also a critical component of the Democratic Party’s future electoral success. Donald Trump and the Republican Party continue to jeopardize the futures of thousands of Democrats and throw up roadblocks to meaningful legislative reform so we can keep winning elections, and it is up to Democrats to stand up for them and save our party.”

“Despite Donald Trump’s fantastical assertions, Latino support for Republicans will only continue to wane. The Republican Party, particularly with Trump as its leader, has been plainspoken about its disdain for immigrants and is more interested in bashing immigrants to cater to its base than it is in acknowledging that immigrants are an important part of America’s social fabric.”

Actually Trump got more Latino votes (29%) than Romney (27%) and Bob Dole in 1996 (21%). So the trend is UP for the Republicans. How could that be when we heard that Trump had called all Mexicans rapists (which of course is NOT what he said). This must be that version of “your truth” that Oprah Winfrey was talking about.

“If Democrats can’t even stand up to Trump and Republicans in defense of Dreamers— whose moral case is unassailable—they will leave a lot of progressives wondering who Democrats will fight for. At that point, Latinos may not be the only constituency within the Democratic base that becomes dispirited and disengaged. If Democrats don’t try to do everything in their power to defend Dreamers, that will jeopardize Democrats’ electoral chances in 2018 and beyond. In short, the next few weeks will tell us a lot about the Democratic Party and its long-term electoral prospects.”

You really are in bad shape when you are getting whipped by Ryan and McConnell!

Rush had a excellent point on his show today. For all this talk from the Democrats about fighting for Dreamers etc, what would happen if the Latino vote was reversed?:

“If the illegal aliens streaming across the southern border were rock-ribbed Republicans, I can guarantee you that Dick Durbin and Steny Hoyer and Chuck You Schumer and Pelosi would be down on the border with mortar and bricks, and they would be building the wall!”

Trump actually comes off looking like the only one who SINCERELY cares about the Dreamers without thinking about how it would benefit him politically.

This also puts Trump in a the win-win situation. If the Democrats refuse to work with the President then he will go ahead without them and the Republican led Congress will attempt to pass some form of immigration/DACA reform which includes funding for the wall. If the Democrats block it and cause a government shutdown, Trump will make sure they own it.

If the Democrats do work with the President and vote for some form of DACA in exchange for the wall, it will send the leftist base into a frenzy and will hurt their prospects in 2018 and 2020.

Either way, Trump is victorious. His punting the DACA reform back to Congress last summer has boxed the Democrats into a corner from which there is no escape, a brilliant strategy. The meeting today already makes Trump look presidential even among some of his critics (bringing the press into the meeting was brilliant). Not bad for someone the media has been spending the last few days declaring mentally incompetent.

Anni Cyrus: My Bruised Eye As a Child Under Islam