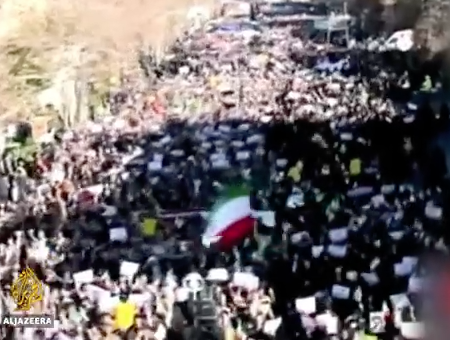 True Grassroots movements are rare, so when they occur we should stand up and take notice. Sometimes they are only around as long as they are useful, other times they do incur real change. The New Year has literally started off with a bang as protests have sprung up all over in a place that perhaps no one would expect, Iran.

Those of us who are old enough to remember the Iranian revolution of 1979 do not have a good experience with Iranians rising up. Iran went from a modern prosperous nation in the 70’s to an Islamic Theocracy almost overnight, and the results have not been good for a variety of reasons, most of which have to do with the sponsoring of terrorism. Most Americans are no doubt cautiously optimistic about what is happening in Iran, but at least on the surface, this is not your mother’s uprising.

What you will read here comes from someone on the ground, right in the thick of protests. For obvious security reasons this individual cannot be identified, so we will call him “Hamid”. “Hamid” is a forty year old medical professional who lives in Tehran. He is close to the average age of not only protesters but roughly half the population in Iran which is under 35. Most news outlets are saying that the unrest began because of increased prices of basic staples like food and gas. “Hamid” says that things began to take off in Tehran and other non-religious cities and ironically spread to religious cities like Mashad and Qom. When the new budget was released it revealed that millions of dollars had been allocated for religious and military institutions. According to statista.com, as of 2016 the unemployment rate in Iran was 12.45%. It has hovered around 10% for the last decade and topped out at 14% in 2014. This and massive government corruption has angered a population of which half currently live below the poverty line.

But what began as economic protests have morphed into massive political protests and unrest. Chants of “Death to the Dictator” and the tearing down of pictures of the Supreme Leader Khamenei are also taking place. As of this writing 50 are dead and 2000 have been arrested.

So what happens from here? It appears that a young, internet savvy population have grown tired of elderly Islamic hardliners who are denying the people the right of freedom of expression and free speech. “Hamid” also says that back in 2011, the son of the late Shah of Iran, Reza Pahlavi became the most popular Iranian figure on “Radio Farda”, the Persian Radio Voice of America. He goes on to say that he believes that the majority of people protesting do want regime change. He says that those who are advocating for regime change want a secular, more pro-western government.

So how long can this go on? Will it be successful? “Hamid” has several thoughts on that possibility. One of the things that is largely misunderstood by Americans is that hatred of America comes mostly from regime leaders. Images of American flag burning come from government leaders and those who support them. “Hamid” says that unlike many other Middle Eastern countries, rank and file Iranians have, for the most part a friendly attitude towards the United States and Americans. And while President Trump has pledged help and support for Iranian protesters, “Hamid” says that for this movement to be successful, the rest of the free world must get behind the protest.

Another big question might be what of the plight of Iranian women? Will a change to a secular government end the practice of treating women as second class citizens? Will they be able to do something as simple as leave their house without wearing a hijab? Right now if that happens they are subject to arrest and possible jail time. An even bigger question is where are those ardent feminists like Linda Sarsour and Ashley Judd? Why are they not shouting from the rooftops for immediate equality for Iranian women? Is it because they are not true feminists? That their quest for equality for women does not cross international borders and only hinges on political ideology and affiliation?

“Hamid” says that on a personal level, he is excited about what is happening in his country. He says that people have been depressed for a long time and now he sees a general feeling of solidarity and hope, and that he would definitely like to see a democratic government emerge in Iran. Those feelings of unity and promise could take the movement a long way. “Hamid” says that his greatest wish is to be able to see his seven year old daughter be able to “grow up in freedom”.

The people of Iran are not just fighting for economic security, they are risking their lives for free speech and freedom of expression. When any people at any time engage in this fight, nations all over the world who value these God given rights must get behind those who fight. “Hamid’s” wish for his daughter is a father’s wish the world cannot ignore.

"Celebration of Life": A Pro-Life Health Insurance Alternative That Is Helping Rebuild Our Healthcare System