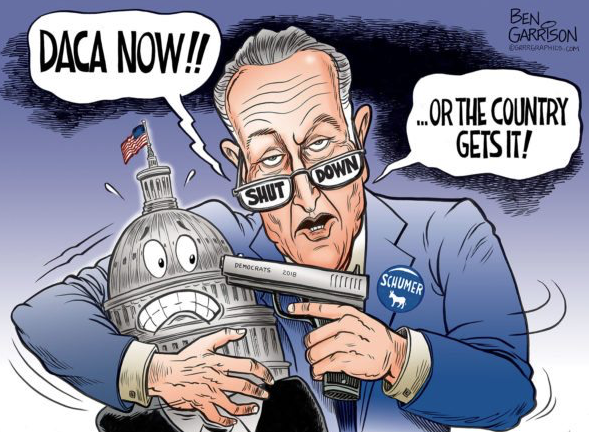 On the first days after the #SchumerShutdown ends we are already experiencing posturing and positioning from one of the key players, Senate minority leader Chuck Schumer, himself.

During negotiations before the shutdown, Trump and team offered several different versions of a budget bill that included something for both sides and Schumer rejected them outright. The Democrats chose to cling to their version of a budget bill that gave them everything they want with regard to amnesty for Dreamers, continued chain migration and more, while only including a fraction of the funding needed for building of the wall.

Taking such a hard lined approach can only lead one to deduce that the shutdown was deliberate and yet another attempt to have something to blame on President Trump.

This strategy failed. It failed miserably.

Even the biggest supporters of the Democrats, the media, started to speak negatively about the failed attempt.

That brings us back to today’s news that Schumer, through an aide, has communicated to the White House that he is taking any funding for the border wall out of any future bill versions. Perhaps he has not learned from his prior experience working with President Trump.

If this kind of posturing from the Democrats continues and escalates, then we will have Schumer and his cronies to thank for another shutdown.

This South Carolina girl can only hope that Senator Lindsey Graham has learned his lesson the first time and that he stays on the side of the people he is supposed to represent, his constituents.

Brenda Stewart is a conservative and Christian activist whose patriotism and support for our military has been steadfast since a very young age. Born in Karachi, Pakistan, she is proud to have been an “Army brat” and thankful for the experiences she and her family had during her childhood. A long time resident of South Carolina, she is active in numerous conservative groups including the local Republican and Tea Party groups. A veteran marketing executive, she founded Stewart Marketing & Consulting in 2011 after nearly three decades of legal management experience. She works with lawyers and law firms of all sizes to help advance their strategic planning and marketing efforts. She is also an in demand speaker/trainer and author of “Intentional Marketing: Building Your Legal Practice One Relationship at a Time.” For more information, go to www.stewartmarketingandconsulting.com.