Last winter, the local media was touting Imam Abdullah Khadra as a victim of President Trump’s travel ban. Khadra, a Syrian, was here on a religious worker visa and was applying for political asylum. 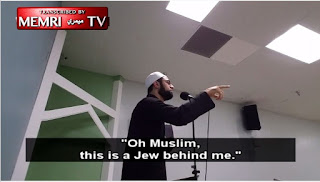 Jewish leftists agreed. Lucy Dinner, the clergywoman from Temple Beth Or in Raleigh, denounced “singling out an entire group of people based on their faith.” Lucy Dinner had previously signed a letter in support of anti-Israel activism by Eric and Jennifer Solomon. Eric Solomon was affiliated with the anti-Israel hate group, T’ruah, and Jenny Solomon ran controversial educational programs at the NC Hillel.

But the local media’s favorite Syrian refugee was soon caught preaching the murder of Jews.

Cary and Islam had previously been in the news when a heavily armed Muslim convert had been arrested last year by the FBI over a terror threat. “For too long the kuffar [non-Muslims] have spit in our faces and trampled our rights. This cannot continue. I cannot speak of anything. Say your dua [prayers], sleep, and watch the news tomorrow. It will only be the beginning,” he had warned.

But now an Islamic Association of Cary figure had upstaged him with his own rant.

In his sermon, Imam Khadra declared that all of Israel was “Muslim land” and would be reclaimed by Muslims. “The question is: Will you be among those who will contribute to regaining it or not?” he asked.

If his congregation was under the improbable impression that he meant regaining it through diplomacy and negotiations, the Syrian refugee went on to quote a notorious genocidal Islamic hadith.

“The Prophet Muhammad gave us the glad tidings that at the End of Time, we will fight those Jews until the rocks and the trees will speak: Oh Muslim, this is a Jew behind me,” the Imam declared.

The genocidal hadith envisioning an Islamic extermination of the Jews tends to be widely quoted by Hamas and other Muslim Brotherhood organizations. It concludes with, “’O Muslim! There is a Jew hiding behind me, so kill him.’” Memri, which had exposed the Syrian refugee’s genocidal anti-Semitism, had recently showcased the genocidal online sermons of 3 other Imams.

At the Tajweed Institute in Houston, Sheikh Raed Saleh Al-Rousan, had recited the same hadith in December. “My brothers, the Prophet Muhammad brought the good tidings, when he said: ‘Judgment day will not come until the Muslims fight the Jews.”

“The Muslims will kill the Jews, and the Jews will hide behind the stones and the trees, [which] will say: Oh Muslim, oh servant of Allah, there is a Jew hiding behind me, come and kill him,” he had preached.

The Houston Islamic cleric, who is from Jordan, then appeared to endorse the Muslim Brotherhood.

Earlier in December, Sheikh Aymen Elkasaby, the imam of the Islamic Center of Jersey City, had prayed for the extermination of the Jews. “Count them one by one, and kill them down to the very last one. Do not leave a single one on the face of the Earth.”

During the summer, Sheikh Ammar Shahin of the Islamic Center of Davis had cited that same hadith. “Allah does not change the situation of people ‘until they change their own situation.’ The Prophet Muhammad said: ‘Judgment Day will not come until the Muslims fight the Jews.”

In four weeks, three Muslim clerics, from North Carolina to New Jersey to Texas, have been caught on tape preaching the mass murder of Jews. And those were only the ones who were caught doing it.

Imagine how many imams in how many settler mosques in America are preaching Islamic terrorism?

Imam Abdullah Khadra had claimed that Trump’s travel ban relied on unfair stereotypes and gave Americans the power to hate. But as he shows us, it’s Syrian migration that imports hate here.

The Imam works as the Director of Education and Youth Development at Cary Masjid’s IQRA Academy. That means that this Syrian refugee has the ability to influence and shape young minds with his hatred.

The Masjid (or mosque) is also known as the Islamic Association of Cary or IAC. Its ambition is to become “one of the largest Islamic Centers in North Carolina”. It claims that its school is “one of the most successful Islamic Schools in the nation”. And this is what its Islamic Supremacist leadership looks like.

The North Carolina Megamosque is nearing completion. When Imam Khadra was showing it off to a local CBS reporter, he claimed that “It will be a place of promoting peace and co-existence.”

Now we know it for the lie that it is.

Imam Khadra was expert at playing a role for the media. In the spring, the Islamic Association of Cary held a vigil of “Muslims, Christians and Jews” to mourn the “victims” in Syria. But the vigil had an anti-American theme, blasting President Trump for trying to keep us safe from the likes of Khadra.

“We care for all souls because we are all humans we belong to the same family,” Imam Abdullah Khadra declaimed. “Whether we like it or not. We are all children of Adam and Eve, we are one human family.”

Those are the sorts of things that the Imam says when the news media is on the scene. But when he’s speaking to a Muslim audience in a mosque, then it’s time to kill the Jews.

A few years ago, there was another interfaith rally opposing Trump outside the Islamic Association of Raleigh.

Eric Solomon was on the scene. “Language hurts, and language can lead to violence,” the anti-Israel T’ruah activist had insisted.

But where are the condemnations of Imam Abdullah Khadra? Where are the discussions of how Islamists preaching the mass murder of Jews can lead to violence? The same leftist clergy eager to condemn Islamophobia appear much less interested in standing up to Islamic anti-Semitism.

Khadra’s case proves once again that a travel ban for terror states is a good idea. A 2007 poll showed that 77% of Syrians supported financing Islamic terrorists including Hamas and the Iraqi fighters who evolved into ISIS. Less than 10% of Syrians opposed their terrorism.

Widespread support for Islamic terrorism among the Sunni refugees continues to be the norm.

The alleged Facebook page of Khadra’s wife shows evidence of troubling support for Islamist supremacism and bigotry The Khadras themselves are clearly invested in the religious civil war taking place in their homeland. And maybe that is where they should return to. And take their hate with them.

When they were attacking President Trump’s travel ban, the Khadras threatened to leave America. After the release of a video preaching racist violence against Jews, Imam Khadra should not receive political asylum. The idea of granting political asylum to a member of a regional colonial majority who favors persecuting the indigenous Jewish minority is a perversion of everything that political asylum means.

“What's in a Profane?" (Shakespeare Revised)