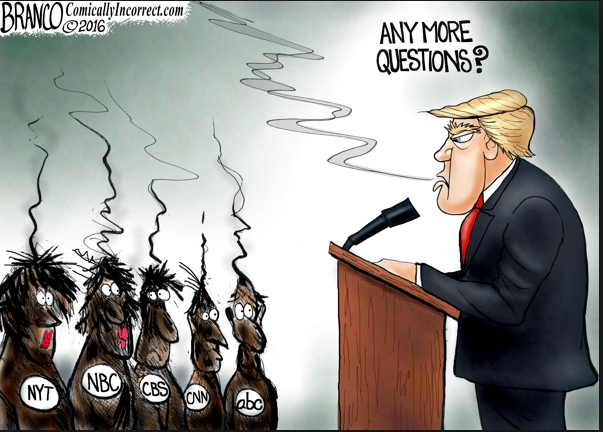 President Trump’s end year remarks to the New York Times acerbically summed up his relationship with the media. “I’m going to win another four years… because newspapers, television, all forms of media will tank if I’m not there.” The answering outburst of rage and contempt from the media burned all the hotter because the statement was not only intentionally provocative; it was also true.

The media has never been able to quit Trump. Its conviction that it can destroy him through coverage has repeatedly proven false. But that hasn’t stopped the media from throwing more coverage at him. And its motive for the non-stop coverage has always been the selfish pursuit of ratings, clicks and sales.

The New York Times, the Washington Post and CNN are all busy playing Trump-slayers when what they really want is four more years of rising subscriptions, ad sales and profits. Few politicians understand that conflict of interest better than Trump who has spent most of his adult life playing the media.

These days the media needs Trump more than ever. Its old purpose, reporting the news, is as dead as the telegraph. Reporting is expensive. It requires infrastructure and personnel. And it isn’t very profitable. In the age of the internet, few people will sit around and watch the pointless reporting from the scene of an event that was once the staple of local news and cable news.

And repurposing viral videos and stories can only fill so much of that hole. But the media doesn’t really report news either. Mostly it repurposes it to create narratives that it can then milk for days or months. Whether it’s a missing airliner, #MeToo or Russian collusion, the best narratives are part mystery, scandal and thriller. The news isn’t just fake: It’s metafictional. It turns real life into fodder for fiction.

The media has crossed the mirror’s edge where reality television, recreations of crimes and movies based on true stories once lived. It lives and dies by turning the news into a fictional narrative. And narratives are cheap. Every news network can run video of Mueller slowly walking down a hallway while a panel of experts discusses what the latest leak really means for President Trump. For the cost of a green room, a limo and a little promotion, CNN can have its very own House of Cards drama.

Trump is the media’s star. Without him, CNN would have to go back to chasing missing airliners. And he has an innate understanding of the media’s business model from the days when he was playing New York City tabloids against each other. The tabloidization of the national media is a development that has left the GOP’s Beltway establishment bewildered and confused. But Trump has always understood the media as a tabloid operation that specialized in the same heroes and heels as professional wrestling.

And he knows that he doesn’t have to beat the media. He just has to let it beat itself.

The combination of political anger and personal greed that drives the media is destroying its credibility. The media was most effective when it was playing the detached narrator and the impartial referee. Trump’s greatest trick was forcing it to get in the ring with him. That’s always been his trick for defeating his opponents. And the media has eagerly cast away its restraints and given in to its worst instincts.

It can’t defeat Trump by getting in the ring with him. But it’s a lot more fun. And it’s profitable.

Trump’s remarks to the New York Times taunt it with the truth about its obsession with him. Behind the ideology is greed. And the greed is stronger than the ideology. The media hates and needs him. It’s become addicted to both. The need intensifies its hatred. And the hatred intensifies the need.

The media spent eight years declining into irrelevance under Obama. Even before Trump, Obama had bypassed the media for social media. The big stories were fed to the press by Obama Inc. cronies like Ben Rhodes or hidden hand political smear shops like Fusion GPS. Even its core mission of cheerleading the left had become meaningless as younger lefties no longer bothered reading, watching or even clicking on mainstream media sites. The media was running out of customers, money and relevance.

Trump revived the media. The young lefties helping monetize the media again are coming for him. And every time he attacks the media, he makes it more relevant. The ritually insincere public wails about the unique threat to the free press posed by snarky tweets from the White House mask the private celebrations in every newsroom that Trump is making them into the center of attention once again.

The media is no longer just reprinting photos of Obama’s latest viral stunt from his house photog or running its stories by Hillary’s people to see how much more flattering they can be; it’s getting out there and leading the #Resistance while cashing in on all the publicity.

And it owes it all to Trump.

President Trump is confident that he can get the media to do what he wants because he understands that it only pretends to be driven by progressive virtue, but is actually motivated by classic vice. The core hypocrisy of the left is its belief that it can have virtue in the public sphere and vice in the private one.

Media stars can grope their female subordinates in private as long as they tout Planned Parenthood and Linda Sarsour in public. It’s okay to fly private jets as long as they push for plastic bag bans. Getting rich is great if they do it while dedicating their careers to opposing the idea of other people getting rich. If you tweet #BlackLivesMatter, you can make racist jokes with your friends. That’s the hypocritical left.

And the media pretends that it can bring down President Trump by getting rich covering him. Trump rode that hypocrisy to the White House. He’s telling the media that he’ll ride it to a second term. And that the media would rather see him in the White House than stop playing into his hands.

Trump beat the media by playing on its private motivations rather than its public ones. And now he’s mocking its hypocrisy in the pages of its top paper while it responds exactly as he wants it to.

President Trump needs the media to hate him. And the media needs him to hate. Trump benefits politically from that relationship, but the media only benefits financially from it. The media’s Trump rage ended Hillary’s career, put a Republican in the White House, pulled us out of the Paris Climate Accords, brought in the Muslim travel ban, recognized Jerusalem and did all the other things the media wails about every second of the day. And the media helped make them happen.

The media could have covered President Trump fairly, objectively and dispassionately. But that wouldn’t have been nearly as popular. It was much more lucrative to run 24/7 hysteria, to convince its own audience that the world was about to end and to stay tuned for the latest Trump revelation. Each time it did that, it boosted his image as a revolutionary anti-establishment politician bringing real change.

Media icons may ridicule Trump’s remarks in public, but they know the truth of them in private.

President Trump makes their jobs, raises and bonuses possible. He’s the reason why media outlets have started expanding, instead of contracting, their investigative resources. Sinking newspapers and networks have suddenly become profitable. CNN can spend three hours on a single Trump tweet. All it has to do is bring in four ‘experts’ to stir up the outrage and then sell commercials in between.

It’s not journalism. But it sure makes money.

The media could stop any time. All it would have to do is put principles over profit. Even the totalitarian political principles of the left. But it’s too greedy to stop. Trump has hooked the media on himself.

President Trump beat the media by using its worst impulses against it. And he’s taunting the media with the truth about its motivations and exposing the lie that it tells itself. He’s reminding media elites that behind their posturing, they will hypocritically betray their leftist ideals and win him another election.

Daniel Greenfield: What Happens When Socialists Run Out of Other People's Money