Prime Minister Thatcher once famously observed that socialists “always run out of other people’s money.” But what actually happens when socialism runs out of money? 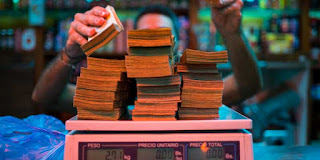 Venezuela, a once wealthy nation with black gold coming out of the ground, is a test case.

The socialist regime ran out of other people’s money, and then out of money, years ago. The government met protests by its starving population with a 40% minimum wage hike. That’s the usual socialist solution to what leftists call ‘income inequality’. The problem is that 40% of nothing is still zero.

The “Strong Bolivar” introduced by former dictator Hugo Chavez, who died of an overdose of Cuba’s socialist medicine, leads the world in one economic category: a 3,000% inflation rate. Currently a dollar will buy you 111,413.23 bolivars. Wait a while and there will be a better bargain in bolivars because economists are forecasting a 30,000% inflation rate. In Venezuela, even the poorest American can become a millionaire in bolivars. The only question is why would anyone actually want bolivars?

The socialist currency of the revolution isn’t counted, it’s weighed on scales. The only thing “strong” about the bolivar is the exercise you get from carrying bags of them everywhere. You could forge bolivars, but the fake money would cost you more than the real money. If you can actually print bolivars, go ahead and get in touch with the Venezuelan government which can’t afford to print its own money.

Venezuela’s central bank (under socialism, everything is centralized) can’t pay for the paper to print all the worthless money. And none of the companies that might sell the socialists the paper will take its worthless paper money in exchange for their paper. There’s no point in printing anything less than 50 bolivar notes because they’re worth less than the cost of the paper. But putting Obamanomics in action, Venezuela ordered billions more bills: more than the United States and Europe have combined.

Paying for minimum wage hikes by printing money doesn’t actually work. That 40% minimum wage hike comes as the buying power of Venezuelans can drop by 50% in one month. The socialist regime keeps printing money and inflation keeps skyrocketing. A 30,000% inflation rate by the end of 2018 is a conservative estimate. More liberal estimates peg it at 200,000%. And then the sky’s the limit.

Is Venezuela’s finance minister out of his mind? No, he’s a leftist. So he believes inflation doesn’t exist.

Luis Salas is the perfect man to head up the economies of Venezuela or California. He’s a sociologist who claims that, “Inflation does not exist in real life.”

Minister Salas claims that inflation isn’t caused by printing infinite amounts of money, but by corporate conspiracies. So the worse the inflation gets, the more the corporations must be conspiring to cause it.

Bafflingly, the inflation keeps growing worse, even as Venezuela is running out of businesses and corporations to blame for its worthless money. The score currently stands at Sociology: 0 and Math: 1.

“When a person goes to a shop and finds that prices have gone up, they are not in the presence of ‘inflation,’” Minister Salas insisted. 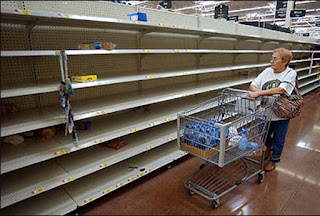 But when you go into a store in Venezuela, it’s because you’ve been on line for most of the day (or you’ve been paying someone to stand on line for you) only to find that there’s nothing in the store except a milk ration which you have to go through a fingerprint scanner to buy and bring back to your starving family. Either that or you can join the hungry mobs looting the delivery trucks as they come in.

So there’s no food. Much of the country is starving. Medicine is also hard to come by because pharmaceutical companies won’t take theoretical sociologist money that it will cost them more to ship out of the country than its actual face value.

So Venezuela’s government has been reduced to trying to pay for medicine with gold and diamonds.

Hugo Chavez had once touted the “marvelous community experience” of bartering. Now his collapsing narcostate is reduced to bartering its precious metals and jewels to survive.

Ordinary Venezuelans have long ago been battling imaginary inflation in the real life horror of socialism by trading in their worthless money for subsidized products and then reselling them on the black market. But increasingly they’re just bartering them to avoid the increasingly worthless currency.

Venezuela’s new supermarkets are the Facebook groups where the people trade sugar for beans. It’s a marvelous community experience that Hugo Chavez’s daughter, the richest woman in Venezuela, hasn’t been able to share with the rest of the populace. When Maduro, the former bus driver driving the country off a cliff as its insane leftist dictator, began chowing down on an empanada during a televised speech, the mouths of his starving people watered and a million memes were born.

But Maduro is promising Venezuelans that a replacement for money is coming soon. Venezuela’s dictator plans to create his own bitcoin, a cryptocurrency based on the only thing his failed state has, oil.

Forget the ‘monero’ and make way for the ‘petro’.

“The 21st century has arrived!” Maduro told a populace that is stuck in medieval times.

The ‘Petro’ will be backed by oil, gas, gold and diamonds. Except that Venezuela might be proposing to back its imaginary money with reserves that it already mortgaged to Russia. And that would make its imaginary money even more imaginary than it already is. But creating its own bitcoin would be a perfect solution by providing worthless money to everyone that wouldn’t even need to actually be printed.

But it still wouldn’t be worth anything.

And bitcoin is already in Venezuela. Tech savvy citizens who turned to imaginary money to escape worthless money aren’t about to switch to government money that’s both imaginary and worthless.

What happens when socialists run out of money? They start pawning the family jewels for more imaginary money while creating conspiracy theories about a capitalist war on socialism.

The left hates reality and math. Its theories turn money worthless. And you can’t eat theories.

Venezuelan socialists took a booming economy, destroyed its currency and reduced it to a barter economy. That’s what happens when socialists finally run out of other people’s money.

If you want to imagine the future of socialism, picture trading sugar for beans on social media.

That’s the leftist economy of tomorrow brought to you by their welfare policies of today.

In Class; Not Cuffs = False Premise that Endangers Learning for All