We’re in the middle of a civil war.

It may not be a shooting war. For the most part. (Though don’t tell that to some Republicans at a charity game practice who were targeted by a Bernie Sanders supporter.) But it’s a war all the same. 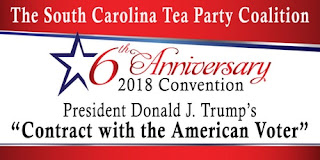 The war is still being fought with paper and protests. But it’s based on irreconcilable differences between parts of the country. Much like the ones that brought on the war between brothers.

This is a topic that I’ve written about quite often over this past year. Rush Limbaugh saw fit to read and promote some of those pieces. And now I’ll be giving a talk on the subject at the South Carolina Tea Party Coalition Conference in Myrtle Beach, SC. It’ll take place from Jan 20-22. I’m scheduled to speak on the 21st, but there are plenty of other great speakers there.

Many of you know Ann-Marie Murrell, of Politichicks, who just doesn’t give up. Tom Fitton, who heads Judicial Watch, an organization doing a great deal to expose the lingering corruption of the Obama years, the always great Kevin Jackson, a real patriot, Lt. Col. Buzz Patterson, Kathleen Willey, who came up against the horror of the Clintons firsthand, Admiral Lyons, whose spirit has to be seen live to be believed, the always funny Evan Sayet, Gordon Chang, with his vital analysis of the big game in the Pacific, Stephen Coughlin, who has been exposing our collaboration with the Jihad from the inside, and many others. And, of course, putting it all together is Joe Dugan.

I look forward to seeing you there.

And here’s a brief except from one of my civil war articles that I will be discussing.

It rejected the Constitution so long ago that it hardly bears mentioning.

It was for total unilateral executive authority under Obama. And now it’s for states unilaterally deciding what laws they will follow. (As long as that involves defying immigration laws under Trump, not following them under Obama.) It was for the sacrosanct authority of the Senate when it held the majority. Then it decried the Senate as an outmoded institution when the Republicans took it over.

It was for Obama defying the orders of Federal judges, no matter how well grounded in existing law, and it is for Federal judges overriding any order by Trump on any grounds whatsoever. It was for Obama penalizing whistleblowers, but now undermining the government from within has become “patriotic”.

There is no form of legal authority that the left accepts as a permanent institution. It only utilizes forms of authority selectively when it controls them.