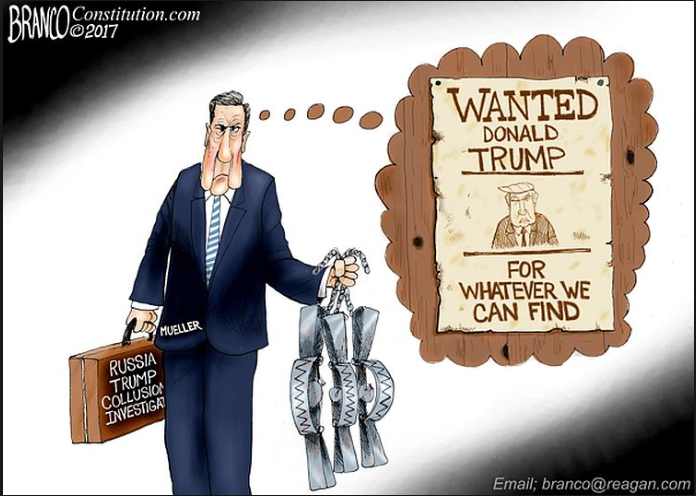 The latest leaks from the infamous Mueller investigation have just been published by Washington Post. Washington Post rejoices over Mueller’s investigating the President’s power (indeed, duty) to fire General Flynn and Cardinal Comey. The fact that Mueller is focusing on “letting Flynn go” and firing the FBI director indicates that Mueller does not care about facts. Both were removed before there was a special counsel, which means that there was not even a possibility of “obstruction of justice.”
Ordinarily, the President is not answering to a special counsel. The special counsel is answering to the Head of the Department, which is Jeff Sessions. In this skewed and prejudiced situation, it was Jeff Sessions who has just been grilled by Mueller for several hours.
Power does not care about the means. Mueller’s partisan, out-of-control team of prosecutors do not care about the truth. The truth is that the real obstruction took place and is still taking place – by Clinton and Lynch and Obama and his apparatchiks – and Mueller and his “team” of biased partisans are just the means.
When everything that the Democrats and Mr. Mueller are doing transpires, millions of Americans who are now kept in the dark will be truly disgusted. The facts are as follows:
1)      Obama administration used the “incidental collection of information” on Mr. Trump and his officials (including General Flynn) and leaked the information to the media;
2)      FBI via Comey leaked classified information to the New York Times;
3)      Fusion GPS was paid by Clinton and DNC for the “research” that by a British agent Steele, who was provided the crucial information by the FBI. Thus the “Russian Dossier” information went from FBI to Steele to Fusion GPS back to FBI, all the time being selectively leaked by Democrats who were paying for the whole thing;
4)      FISA court warrant was based on the information created by the FBI, purportedly provided by Steele – there is no way Rice and Obama did not know…
5)      The head of counterintelligence of the FBI was involved in the cover-up of Clinton investigation, erased 50,000 text messages and other information, while “working” on Trump investigation of a “collusion with Russia”;
6)      At least one chief investigator on the Mueller team (McCabe) was present at Clinton’s “election party”;
7)      At least one chief investigator considered (Struck) himself an “insurance policy” for Clinton “in case Trump was elected”;
8)      Loretta Lynch used name Elizabeth Carlyle and private email to communicate about the Tarmac Meeting – the information conveyed had been conveyed prior to Clinton “questioning” the following weekend – to Comey.

No doubt, at this meeting, AG Lynch also told Bill Clinton that Hillary Clinton was going to be cleared by the FBI…

As someone who was cross-interrogated and jailed by the KGB, sadly, my current impression is that the only difference between FBI and KGB is that KGB made no secrets about being partisan – to be “on the team” you had to have a good record as a “fighter for socialism” and member and supporter of the Party. They were proud of it, openly proud – what you read in Orr’s messages to his girlfriend is something they would not have been ashamed to say in public. Something tells me even Orr is proud of the leaked messages, probably patted on the shoulder by the higher echelon Democrats behind the scenes.
Finally, what does the most damage to America is selective leaking and selective reporting, which is called propaganda. Goebbels would be proud of CNN and NBC.
Today, the Pope called on “Fake News Media” warning them of the old Biblical tale – the one about the snake leaking selective information to the public. When asked: “Are you comparing journalists to snakes?” His press secretary replied: “Not all.” Apparently, they also have CNN in the Vatican…
Share
Facebook Twitter Pinterest Reddit Share via Email Print

Kevin Jackson Breaks Down the Snowflakes and Leftists of America #SCTeaParty2018