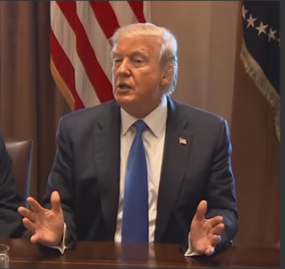 As I read through the reaction of the mainstream conservative media today I was surprised to see that it overwhelmingly thought Trump’s meeting yesterday was a disaster and that he had totally surrendered on immigration. So I decided to do something really revolutionary. On my lunch hour I found the video of the meeting online and watched it – all of it. And you know what? The reporting on it has been totally wrong. Trump had total command of the meeting and also put the Democrats on record as saying they were for border security among other things.

In the first 3 minutes of the meeting Trump articulated the items that he wants in the DACA bill:

“For that reason, any legislation on DACA, we feel — at least a strong part of this group feels — has to accomplish three vital goals.

But it also has to be a bill where we’re able to secure our border. Drugs are pouring into our country at a record pace and a lot of people are coming in that we can’t have. We’ve greatly stiffened, as you know, and fewer people are trying to come in. So, in order to secure it, we need a wall.

Second, it has to be a bill to end chain migration. Chain migration is bringing in many, many people with one, and often it doesn’t work out very well.

So those three things are paramount. These are measures that will make our community safer and more prosperous. These reforms are supported by the overwhelming majority of Americans. They’re from every standpoint, from every poll, and they’re being requested by law enforcement officers.”

From this point on, everything that was discussed, at least from Trump’s perspective, is based on the ground rules he laid out. I haven’t seen any reporting that talks about what he said at the outset. Instead we’ve heard sound bites from the meeting that have been taken out of context.

And there is one other crucial point that has been overlooked. When Trump uses the term DACA he uses it as an acronym encompassing all 3 of his goals above and assumes everyone in the room is on the same page with him on that.

Senator Feinstein: “What about a clean DACA bill now, then we go into a comprehensive immigration reform procedure…”

Trump: “We’re gonna come up with DACA, we’re gonna do DACA, and then we can start immediately on phase 2 which would be Comprehensive immigration reform.”

Kevin McCarthy: “I think what Senator Feinstein’s asking here, when we’re talking about DACA we don’t want to be back here 2 years later, we have to have security as the Secretary will tell you.

So it was a simple misunderstanding on Trump’s part of her position – which did NOT include border security. Trump did not change positions in 60 seconds and repeated many times in the meeting that border security and the wall was a must in this bill.

Later in the meeting Trump clarified his own position:

Another comment that Trump has been criticized for is saying he would sign anything they send him. Of this, Mark Levin said, “That’s no ‘Art of the Deal. That’s complete surrender. Now, I suspect the president will realize that and try to walk some of that back, but that is very bad. And he did it in front of the media. He did it in front of the Democrats. The whole world heard it. Just give me something, and I’ll sign it. Are you kidding me? That’s what he said. I didn’t say it. That’s what the president said.”

Again, based on the entire meeting, this was a presumption on Trump’s part that his goals would be met in some form on the final bill. But if you want definitive proof, here is an exchange just before the meeting ended:

Questioner unknown: “Is there any agreement without the wall?”

And on the timeline for building it:

“I heard the other day, 7 years to build a wall. We can build the wall in one year and we can build it for much less money than what they are talking about.”

Do these comments sound like surrender or no wall? How could this have been missed? I have mentioned Ann Coulter and Mark Levin but this extends far beyond them. It appears that the entire conservative media was asleep at the switch yesterday. Or they got lazy and created their own echo chamber. Either way this was embarrassingly low quality reporting and makes me wonder what other things they have gotten wrong. Ann Coulter called the meeting the lowest point of the Trump Presidency. I think it’s more accurate to say that the reporting on it was the low point. Michael Wolff appears to have company.

The full video of the meeting can be found here. It is almost an hour but well worth the time to watch and judge for yourself what happened.

Daniel Greenfield: The Madness of the Anti-Trump Shrinks