I’ll begin this one with a note and a disclaimer: The information and opinions offered in this article are protected under the First Amendment. You have a First Amendment right to either read, pay attention and learn or, to ignore it and remain ignorant. It’s your free choice.

I wish that I could wish everyone a Happy, Healthy, Prosperous New Year.

By any reasonable, responsible standard, California is off of the rails.

The California elite have forgotten that America is a government of the PEOPE (citizens) and for the PEOPLE. Our absurd pot loving dope pushing Governor Jerry Brown, aka the Moonbeam, working hand in hand with a primarily Democratic majority in the State Senate and State Assembly who are principally anti-American Communists, Racists, Socialists, Progressives, and Globalists are creating a frighteningly tyrannical system of governance that is anti-citizen.

Brown is an (expletive) who will rightfully soon see some real havoc thundering his way because of his criminal nature.

Without pitty, Brown has imposed terrible burdens on the good citizens of California with the highest gasoline prices in the nation which hinder consumers from making purchases that ought to strengthen the economy. To exacerbate the gasoline prices, this gang of thieves now want to impose a penny per mile tax on all drivers which will cost businesses and commuters enormously, and further throttle business and economic productivity and progress. Naturally, these New World Order, Agenda 21/2030 gang want people to stop commuting and live in crowded, dingy people-towers and ride non-existing trains to nowhere. This is a brutally abusive form of tyranny guaranteed to denigrate the quality of life for millions of Californians..

The Brown gang passed a law that decriminalized crime. Yes, you read that right! If someone breaks into your car, business, or home and robs you they can get away with a mere citation unless one of the items stolen has a value of over $950.00. If they have a bag full of things deemed worth less than $950.00 individually, their theft of potentially many hundreds or a few thousand dollars of your property will not be considered a felony crime, just a misdemeanor, and a shove out of the jailhouse door. Reprehensible.

The Brown cabal are violently protective of voter fraud. If California had legitimate voting without the fraud, we-the-people would be able to elect servants of the people. Right now, the ruling elite in Sacramento are working hard to subjugate we-the-people so they can live in their ivory towers while our lives become less enjoyable (the free pursuit of life, liberty, and happiness). Evil tyrants like the Sacramento elite can’t tolerate free people. We need to abolish electronic voting which has been proven again and again to be unreliable, susceptible to hacking and vote changing. We need to move back to reliable paper ballots with thumb prints which can sort and invalidate duplicate ballots and be used to press charges against fraudulent voters.

To cement their Communist government, the tyrannical Brown cabal imposed the “top two” tier of listing candidates on ballots. This writer has lived and worked abroad for a quarter of a century and has seen many forms of government in action. What the Brown cabal has done with the “top two” is establish a hard core dictatorship where the party bosses select who the candidates are, and we-the-people can only hope for the best, which will NOT be forthcoming. I believe that this form of selecting or determining candidates is unconstitutional. Mr. Brown and his cabal need to be investigate by the Federal Bureau of Investigation under the RICO (Organized Crime) Act and face the sound of clanging iron bars.

Of course, pot, weed, marijuana, and whatever other monikers are applied is now becoming abundantly available. This smoky pungent pollutant has been “deemed” harmless by reckless politicians. It is well known that potheads become very laid back and less motivated, less situationally aware, and more dependent on the government for support. Stoned potheads on the road are dangerous and will cause an increase in roadkill of decent, innocent people. But, potheads are easy to manage and control and won’t push back against bad governance, so that’s OK. Carnage is OK. Carnage helps with the New World Order/Agenda 21/Agenda 2030 goals of population reduction, right? Further, long term pot use damages the heart and raises the possibility of strokes which will place permanently impaired pot users on welfare rolls for decent people to support; diminished cognitive skills and decision making, increased dementia and paranoia, dietary and nutritional imbalances, damaged lungs, and possibly more. This form of carnage to eliminate the increasingly burdensome and worthless may be considered good.

Still, pot is considered illegal by Federal statute, and this clearly is coming to slam California where federal officers will soon be raiding so called “legal” pot dispensaries and shunting hundreds if not thousands of dealers off to the hoosegow, and hopefully a lot of crooked politicians and greedy officials who are skimming substantial cash from these operations as well. 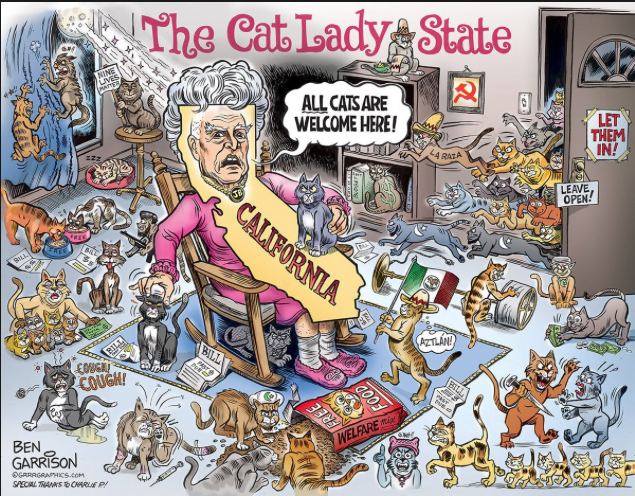 California is now a sanctuary state. That means that the state government willfully harbors, coddles, and protects criminals. This is another organized crime that needs to be addressed by the Department of Justice under the RICO (organized crime) Act. At this point the Federal government is rapidly increasing the number of federal officers who are aggressively rounding up illegals (aka, criminals), and this will not stop. This will break up a lot of families and hurt many people, legal or illegal, and there is nobody to blame but Brown and his gang of lying elites for the consequences that will, like a chicken, come home to roost. Just days ago, a silly Communist liberal whined that she thinks that prosecuting criminals is a gross violation of the constitution. Huh?

President Trump is not a fool, and is not one to mess with. After a life in the construction and development industry in New York, Donald Trump cut his teeth dealing with gangsters, union bosses, corrupt politicians, thieves of every nature, pimps and whores, hustlers, shysters and every other type of slime known to mankind. Gerry Brown fits neatly into any one of these categories. These creeps are losers, Jerry Brown will find himself on the losing side. President Trump is a practiced, accomplished winner.

Sixty years ago, California High School graduates were among the best educated people on earth. Now, many given an exit pass from the halls of education are often barely able to tie their shoe laces. This is a direct result of extremely liberal governance, Democratic leadership. This is a crying shame – a wicked crime being visited on humanity and civilization. Those 1960 high school graduates were better educated in the three R’s, sciences, and technology than current university dolts. Good, competent teachers face retribution while bad, really bad teachers and administrators are rewarded. It is essential that this be reversed.

Will President Trump apply lessons learned from Obama and sic the IRS on crooked politicians and others in California? The President has the authority to make command decisions of this nature. Stand-by!

President Trump is destined to do the right things because California elites won’t. We will see increased oil and gas production both onshore and off coast no matter how much carbon emitting gaseous whining the Cal EPA and related fools emit.

President Trump can apply various elements of government to either provide or restrict monies for investments in California, to help business who are being driven out of California to begin anew elsewhere. This writer has personal and professional friends and associates who have bailed from California, taking billions of dollars with them and firing hundreds of formerly well-paid employees. This, thanks to the willfully ignorant and very evil, crooked Sacramento cretins.

Gun control: Government should fear an armed citizenry. Citizens should not live in fear of tyrannical government. California has some of the most egregiously bad gun and ammunition laws in existence. Why? The Brown cabal knows, as did the Nazis, and Communists know that an unarmed people can be controlled and made to fear government. Our fabulous Constitution and awesome Second Amendment affirm that the government should respect the people, and an armed citizenry are to be feared. These Brown thugs have no idea how innovative angry citizens can be, and guns are being smuggled into the state from all over. California’s stupid laws regarding ammunition purchases will be thwarted. Guns and ammunition will soon be more abundant than before, guaranteed.

The Sacramento elites have worked hard to destroy one of California’s greatest industries: Agriculture. Their actions have driven food prices higher, caused scarcities, and bankrupted thousands of wonderful people. Fishing is another industry being destroyed by eliminating spawning grounds and corrupting waterways.

Anni Cyrus: My Bruised Eye As a Child Under Islam

Daniel Greenfield: The Madness of the Anti-Trump Shrinks