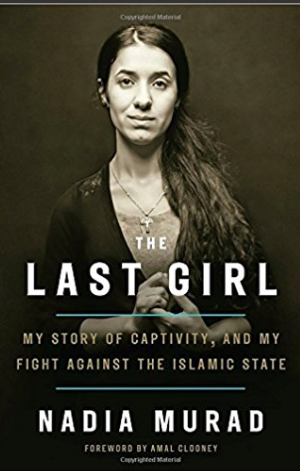 Even though we hear about the atrocities that have occurred under ISIS in general, we are insulated from it because we aren’t personally affected by it and in most cases don’t know anyone who has been.

But then a book like “The Last Girl” by Nadia Murad comes along and shatters our perception of the real world as we read the graphic details of what life under ISIS is like.

Nadia Murad lived in the small village of Kocho in Northern Iraq. She was a member of the Yazidi religion. Her days were spent with family and the rigors of farming and shepherding. But it was a life she loved. Her family would often sleep on the roof to get some small relief from the heat. Everyone in the village knew one another – it was a peaceful if challenging life.

Then ISIS came and destroyed her world. Everyone in her village was rounded up and taken to a local school. The men were separated from the women and killed in mass graves. Few escaped. The women were taken as slaves to serve the men of ISIS (unless they were too old in which case they were killed). Nadia’s mother and six of her brothers were killed. For over a year Nadia was raped and tortured. Then she describes how one evening she was able to escape:

“I knew that if I thought about it any longer, I would run out of time. I had to decide. But I couldn’t move. No matter what choice I played in my head, it always ended with me being captured and punished. I assumed he had left me alone in the house with the door unlocked and no guards not because he had forgotten. He wasn’t stupid. He did that because at this point, having been abused so long and being so weak from sickness and hunger, I wouldn’t think of trying to escape. They thought they had me forever. They are wrong, I thought. And in the blink of an eye, I tossed my bag over the wall and then jumped over it myself, landing with a thud on the other side.”

With the help from a family in Mosul, Nadia was finally able to escape completely. The tale of her road to freedom is a page turner and fraught with an endless number of dangerous checkpoints in her attempt to make it to Kirkuk, where the possibilities of something going wrong was very likely. Ironically the one thing that may have saved her was her head scarf, which women were required to wear. No one recognized her.

Sadly her sister Katherine died when she stepped on a landmine during an separate escape attempt of her own.

It must be said that there were many people in Iraq that operated underground to help women like Nadia escape from the butchery of ISIS, including her brother Hezni.

“Later I would learn about the smuggling networks that had been established to help Yazidi girls escape from ISIS, in part because from his container home in the refugee camp, Hezni would help to arrange the escapes of dozens of girls. Each operation began in panic and chaos, but after the family of the victim managed to get enough money together, it would begin to unfold like a business deal, employing a system of smugglers. There are middlemen – mostly Arab, Turkmen, and Syrian or Iraqi Kurdish locals – who are paid a few thousand dollars for their part in the scheme. Some are taxi drivers, who smuggle the girls in their cars; others serve as spies in Mosul or Tal Afar, letting families know where the girls are hiding; others help at checkpoints or bribe and bargain with Islamic State authorities. A few of the key players inside the Islamic State territories are women; they can more easily approach a sabiyya (slave) without causing alarm.”

Today Nadia is a human rights activist and currently working to bring ISIS before the International Criminal Court on charges of genocide and crimes against humanity. She also heads Nadia’s Initiative, a program dedicated to helping survivors of genocide and human trafficking to heal and rebuild their communities.

While this is not an “enjoyable” to read, it is one that is educational and helps us understand the barbaric nature of ISIS more clearly.

My Experience at A "White Privilege" Meeting