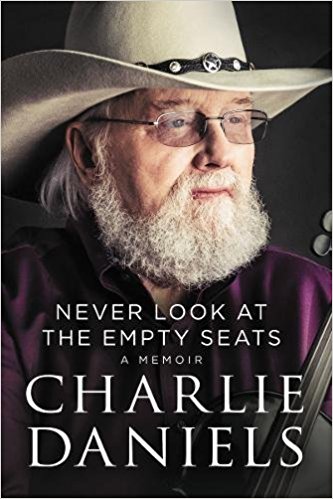 Several weeks ago, I was in the library and came across the new book by Charlie Daniels. Seeing his name and picture instantly transported me back in time. It was the summer of 1979 and our family was on vacation in Florida visiting relatives. That summer, in the deep south, one song stood out among all others – “The Devil went down to Georgia” by The Charlie Daniels Band. To say it was popular would be an understatement. The song was a phenomenon. The country/southern rock sound combined with the most incredible fiddle playing I had ever heard made for a monster hit. Amusingly, I remember one particular DJ stating that he thought the “devil” had actually played better than Johnny!

Flash forward 30+ years. My son and I are driving to Florida. We had just crossed the Georgia state line and the very next song that came on the radio was – you guessed it – “The Devil Went Down to Georgia”. I wondered if maybe I had encountered a Twilight Zone type of time warp. Or maybe just one of those moments in life that God winks at us.

So it was with great interest that I read Charlie Daniel’s memoir, “Never look at the empty seats”.

While the book is about his life and career, it is not written in chronological order. It is written to highlight certain events in his life that shaped who he is as a person and musician. The book has a very down to earth feel to it, as if he’s talking to a friend and sharing these stories. Charlie Daniels describes his purpose in the Preface:

I have had many unique experiences in my eight plus decades. I’ve ridden on everything from an Eskimo dog sled to the Concorde to Air force One. I’ve performed in every state in our union and in some 21 foreign countries. I’ve stood at the 38th parallel that separates South and North Korea, knocked a few chips out of the Berlin wall, and worked cattle with the cowboys in Texas and the buckaroos in Nevada. I’ve seen the polar ice cap. Seen the Negev in Israel, been baptized in the Jordan river, and marveled at the beauty of the Sistine Chapel.”

He also gives his philosophy on performing:

“One of life’s important lessons I’ve learned, as it relates to the path I’ve chosen, is like the old song says ‘accentuate the positive, eliminate the negative’. Walk on stage with a positive attitude. Your troubles are your own and are not included in the ticket price. Some nights you have more to give than others, but put it all out there every show. You’re concerned with the people who showed up, not the ones who didn’t. So always give them a show, and never look at the empty seats.”

One interesting item he discusses is the changes (not for the better) that occurred in the radio industry starting in the 1980’s:

“Our once-dependable album-oriented radio format had achieved a lot of success. The advent of FM receivers in cars and portable radios had vaulted the better-sounding, formerly-shunned FM radio stations to the forefront of broadcasting. This attracted the attention of major companies and mass programmers who snapped them up, fired personnel, and changed formats, which seriously shortened playlists. Stations that once played everything from James Taylor to Weather Report had their parameters shriveled and their record libraries gutted. The jocks and programmers fortunate enough to survive the takeovers found themselves under the thumb of a tight-fisted consultant in some distant city; someone else controlled their playlists and discouraged the individuality that had once been the keynote of freewheeling album oriented stations.

Unfortunately, that is still true today even on oldies stations.

Charlie Daniels has survived several close calls with major injury during his life including his right arm almost being severed by a mechanical post hole digger in 1980 and a stroke in 2010:

“The day was magnificent. The snow as smooth and deep, and the trail had just been groomed. We were skimming across the snow at a good clip, doing one of my favorite things in the whole world: snowmobiling in the Rocky Mountain backcountry. I noticed that my left hand was getting numb and thought it was because I had been hanging on to the handle bars of my sled for so long that it had gone to sleep. Then I felt the left side of my mouth start to grow numb, and my left foot started getting hard to control. I knew something was happening to me. I knew I’d better get back down the mountain and get some help.

The early consensus of the doctors was that I had indeed had a stroke in the right part of my brain. The only effect it seemed to have left behind was a numbness in my left hand and a stiffness in my left arm.”

He goes on to discuss how the “fingerprints” of God were all over that experience.

CDB has been performing for over 40 years and is still popular today. In recent years they have recorded a gospel album, a blues album (which is an awesome project) and a tribute to Bob Dylan (one of Charlie’s favorites). His current release is “Memories, Memoirs and Miles – Songs of a lifetime”. Charlie Daniels shows no sign of slowing down. He is a true patriot, devoted husband and phenomenal musician.

But at the core of Charlie Daniels is his faith. He devoted an entire chapter to it and it is one of the best presentations of the Gospel of Jesus Christ that I have read. I think he may have missed a calling as a Pastor. I present an excerpt of it as a fitting close to my review:

“Jesus was conceived not by man but by the Holy Spirit. He was the only human to live His life without blemish or transgression, breaking the cycle of the sin man had been born into since Adam yielded to Satan’s temptation in the garden of Eden.

God used the blood of the sinless Son of the living God to break the power of Satan and rip open the curtain of the Holy of Holies, the section of the temple where only designated priests could enter. That made it possible for ordinary men top come into the very presence of almighty God to present their praise and petitions in Jesus’ name.

Jesus was crucified, but He rose from the dead and walked among His disciples, breaking the chain of death and in full view of many. He ascended up into the sky to sit at the right hand of the Father, interceding for those who love Him and try to live according to His teachings.

The blood of Jesus shed on the cross covers the sins of those who are willing to accept His promise of eternal life.

How do we receive this eternal blessing of life through Jesus Christ? In my own personal opinion, one of the hardest things to grasp about the salvation of Jesus Christ is the simplicity. There’s nothing you can do to earn it, deserve it or obtain it. You don’t have to be in a certain place. You don’t have to be with a certain person or perform some ritual or physical act. The bible says “If you declare with your mouth, ‘Jesus is Lord’,and believe in your heart that God raised Him from the dead, you will be saved”. (Romans 10:9)

For more information about Charlie Daniels and where he will be performing, visit his website.

“What's in a Profane?" (Shakespeare Revised)