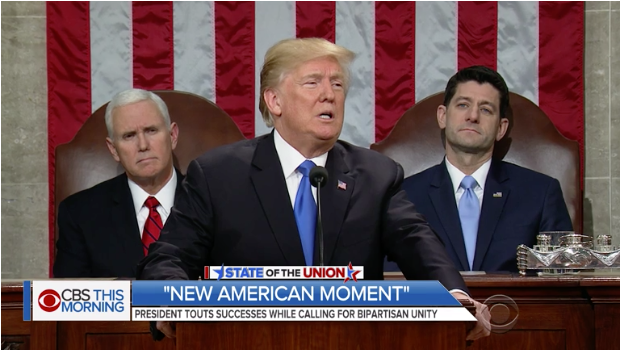 President Donald Trump has delivered his first State Of The Union Address to the nation.

His theme was “Building A Safe, Strong, And Proud America.”

His primary focus was on opportunities that will lift up all Americans, and to outline a review of his accomplishments of his first year in office.

Unlike the past, the address this year was surrounded by controversy, boycotts, and charges of racism.

At least eleven members of Congress vowed not to attend the address and the boycott was led by the Congressional Black Caucus, with Representative Maxine Waters being the most outspoken critic of the President. At least five U.S. Supreme Court Justices did not attend. Justice Ruth Bader Ginsburg was the first to announce a boycott of the speech.

Other members of Congress, and the President invited special guests to the historic event also. Most notable among those inviting guests was the U.S. House of Representatives Minority Leader Nancy Pelosi. She vowed earlier to fill the House gallery with illegal aliens. Her promise received a lot of attention from individuals and the media.

The most anticipated showdown began at 9:00 P.M. shortly after the House Sergeant at Arms announced the arrival of the President as he entered the Chamber, to the Speaker of the House, Paul Ryan. The famous line, “Mister Speaker, the President of The United States” precluded cheering and a loud applause. The President then took the Podium, and handed copies of the speech to the Speaker and the Vice President. The Speaker presented the President to Congress, and the speech began. He began by stressing that his Administrations goal is to make America Great Again for all Americans.

The President began his speech by recognizing the heroic actions of his special invited guests. He gave a special shout-out to Congressman Steve Scalise.

He stated that we are building a safe, strong, and proud America, as he touted his record on jobs, highlighting Afro-Americans, and Hispanics.

He highlighted the companies that are bringing back jobs to America, and giving their employees raises and bonuses.

Speaking of the American Dream, he stated that as Americans, we can achieve anything under one flag.

He proudly recognized our Veterans, and Military Heroes. He again pledged his support for them.

The President during this speech praised our flag, patriotism, and religious liberty. This is a message for all Americans, and instills pride in each of us. The message of the night is good news for every American, and displays reasons why we must live and work together to keep our nation prosperous and strong.

Although the media showed us that there were protests outside of the Capital, those gathered inside remained calm and quiet. The President’s message is a message that people are curious about, and many of those who oppose him see that results speak louder than the fake news that they have been given by the media.

American citizens heard a message of hope and encouragement that includes opportunities for each of us.

It is imperative that Congress, and the public support our President and his policies so that we can all share in the furtherance of the American Dream.

The President spoke to Congress about the dangers of our immigration system, and asked them to close the dangerous loopholes that cause that system to be broken. He spoke of his duty to make all Americans safe, because Americans are Dreamers too.

The President pointed to four pillars in his Immigration policy to Congress. These pillars include a 1) path to citizenship over a twelve year period; 2) Fully secure our border with a wall, and hiring more people to protect it; 3) End the Visa Lottery and move to a merit based system; and 4) End chain migration.

This was the only time that we heard any negative reaction from the room.

The president spoke briefly about our Opioid problem, and strengthening our Military, stressing that we keep America first.

In brief he also mentioned the action that his Administration has taken to recognize Jerusalem as the Capital of Israel, and how our military will be allowed to do it’s job unrestricted in the future.

The President promised to encourage us with a message to build a safe, strong, and prosperous America.

It is now up to our elected officials to follow up, and for every American to get onboard the Trump Train, so that we can indeed “Make America Great Again.” After all, Americans are Dreamers too!

Book Review: The Awakening of a Surgeon by Dr. David H. Janda

The 'Hate Trump' Coalition is a Hate America Cabal