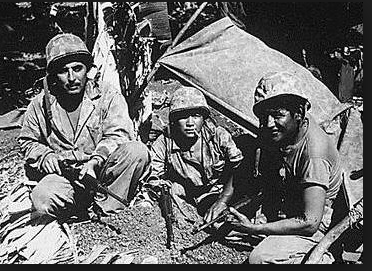 As a child, I learned when to be quiet. I learned when to listen. Today it seems that being an active listener is a lost art as is the understanding of the subtle variances and dynamics of language. By being respectful to my Dad and his friends, I could listen to their tales of World War II while embracing my own small space in my Dad’s Den. One time, when my dad was feeling expansive with one of his war buddies (I paraphrase), he stated that if it had not been for “ the Indians” America would have lost the Pacific theater of World War II to the Japanese.

Being six years old at the time it would be many years before I understood the meaning behind my Dad’s seemingly casual remark.

In the mid-1990s, many years after my Father’s death, I discovered my own American Indian heritage. My Father’s Mother was a full blood Cherokee and apparently his Father had some American Indian blood, Lakota Sioux, in his background. I am humbled by and grateful for the revelations of my Father’s American Indian heritage as told to me by my Uncle Virgil and by my many cousins, still years later, via conversations in social media. I was not aware of this heritage and felt quietly proud of the Indian blood that flows through my veins. However, as I was not raised as an American Indian, I cannot claim any real membership to any Indian tribe or make a claim to any Indian nation.

So who were the Indians whom my Father claimed were responsible for America’s victory during the Pacific theater of World War II?

They were the Code Talkers. Code Talkers were people in the 20th Century who used indigenous languages as a means of secret communication during wartime. In modern day society the term is associated with United States service members during the world wars who used their knowledge of Native American languages as a basis to transmit coded messages. In particular, from World War I through the Korean War, there were 400-500 Native Americans whose primary job was the transmission of tactical messages.

The first use of this method of communication was during World War I. This occurred when Company Commander Captain Lawrence overhead men in his unit communicate in the Choctaw language. Eventually 14 Choctaw men in the Army’s 36th Infantry Division trained to use their native language in code. They helped the American Expeditionary Forces win several crucial battles in the Meuse-Argonne offensive in France during the final German push of the war. Within 24 hours of the Choctaw language being pressed into service, the tide of the battle had changed. Within 72 hours, the Germans were retreating and the allies were in full attack mode.

In World War II Phillip Johnston, a civil engineer for the city of Los Angeles, proposed the use of the Navajo language to the United States Marine Corps at the beginning of World War II. Johnston, a son of a missionary couple, had grown up on the Navajo Reservation. Early in 1942, Johnston met with Major General Clayton B. Vogel, who was the commanding general of Amphibious Corps and the Pacific Fleet, and his staff. Johnston stage tested the Navajo code talkers under simulated combat conditions. These tests demonstrated that Navajo men could encode, transmit and decode a three line message in 20 seconds versus the previous 30 minutes established by machines at that time.

Major General Vogel was immediately sold on the use of Code Talkers in the Pacific Theater of World War II and recommended that the Marines recruit 200 Navajo. The first 29 Navajo recruits went through boot camp in May 1942 at Camp Pendleton. The Navajo code was developed and modeled on the Joint Army/Navy Phonetic Alphabet that uses agreed-upon English words to represent letters.

The Navajo Code Talkers were mainly Marines. It was well determined that spelling out tactical terms phonetically was far too time consuming. Therefore some terms, concepts, tactics and instruments of modern warfare were given uniquely descriptive nomenclatures in the Navajo language ( Such as the Navajo term for shark being used to represent a destroyer.)

Additionally, during World War II, the languages of Lakota, Meskwaki and Comanche were also used successfully for tactical military maneuvers. The practice of code talking was also used to great success in the Korean War. For reasons, unknown to this writer, the practice of code talking was not used in the Vietnam War. Personally, I blame President Lyndon Johnson for that mistake.

The use of the code talkers during wartime was not revealed until 1968 by an incompetent journalist. It was not until July 16, 2009, that President George W. Bush presented Congressional Gold Medals to honor the four surviving members of the original 29 Navajo Code Talkers. They were John Brown, Lloyd Oliver, Allen Dale June and Chester Nez. Chester Nez famously saluted his Commander In Chief when he received his medal. Chester Nez, with code talker scholar Judith Schiess Avila, wrote the gripping, 2011 book, “Code Talker,” (Penguin Group). “Code Talker,” is the book to read to understand the use of code talkers in World War II. Marine hero and Code Talker, Chester Nez passed away on June 4, 2014. Additionally, 17 Congressional Silver Medals were also presented to the 17 code talkers that followed the original 29 on July 16, 2009.

On November 27, 2017, President Donald J. Trump had a ceremony to honor the three remaining code talkers of the original 29 Navajo code talkers. Many in the media missed the delightful irony of having the ceremony in front of a portrait of President Andrew Jackson. Perhaps that was because President Jackson was the founder of the Democrat Party.

President Jackson was also directly responsible for the murder of countless indigenous people by way of his Indian Removal Act and was guilty of other criminal acts of genocide and fraud against the American Indian. This delicious irony was not lost to me.

Instead of honoring the surviving code talkers the media paid far more attention to the not too subtle dig at Senator Elizabeth Warren when President Trump referred to her as “Pocahontas.” Personally, I felt that the use of the reference to the America Indian historical figure Pocahontas was giving Senator Warren far more credit than she deserved. It was not, by any means, a “ racial slur.”  In fact, as it was discovered in recent memory, Senator Elizabeth Warren has lied to the American people with her claims of having an American Indian heritage.

So as an American with considerably more Indian blood than Elizabeth Warren, I write this article with pride in reference to our American Indian code talkers and their service to our freedom. They walked in beauty and they lived in courage.

Daniel Greenfield: Everybody in the Media Knew