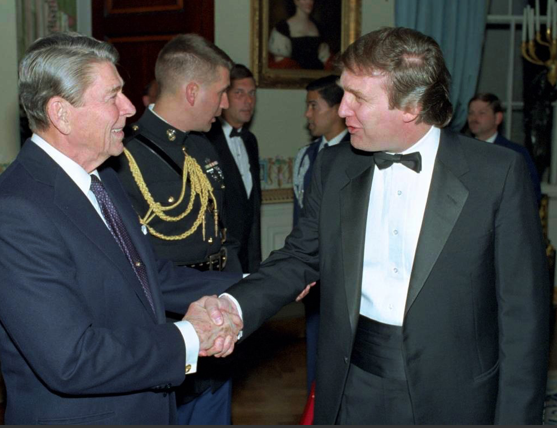 As I read the transcript of President Trump’s National Security Speech last week I found myself mentally hearing Ronald Reagan’s voice. This wasn’t a conscious effort on my part but one that was engaged by seeing the words in print and realizing how very similar the rhetoric in Trump’s speech was to what Reagan might have said.

There were several points and themes in the speech that could easily have been spoken by President Reagan in the 1980’s:

On the American people:

“Throughout our history, the American people have always been the true source of American greatness. Our people have promoted our culture and promoted our values. Americans have fought and sacrificed on the battlefields all over the world. We have liberated captive nations, transformed former enemies into the best of friends, and lifted entire regions of the planet from poverty to prosperity.

Because of our people, America has been among the greatest forces for peace and justice in the history of the world. The American people are generous. You are determined, you are brave, you are strong, and you are wise.”

The failures of the last decade:

But last year, all of that began to change. The American people rejected the failures of the past. You rediscovered your voice and reclaimed ownership of this nation and its destiny.

On January 20th, 2017, I stood on the steps of the Capitol to herald the day the people became the rulers of their nation again. Thank you. Now, less than one year later, I am proud to report that the entire world has heard the news and has already seen the signs. America is coming back, and America is coming back strong.

The role of government:

“Upon my inauguration, I announced that the United States would return to a simple principle: The first duty of our government is to serve its citizens, many of whom have been forgotten. But they are not forgotten anymore. With every decision and every action, we are now putting America first.”

President Trump then spent time summarizing what he has done in just his first year in office:

All of these are the kinds of things Reagan would have done.

Trump then outlined his four part plan of national interests:

“With the strategy I am announcing today, we are declaring that America is in the game and America is going to win.”

“We must protect the American people, the homeland, and our great American way of life. This strategy recognizes that we cannot secure our nation if we do not secure our borders. So for the first time ever, American strategy now includes a serious plan to defend our homeland. It calls for the construction of a wall on our southern border; ending chain migration and the horrible visa and lottery programs; closing loopholes that undermine enforcement; and strongly supporting our Border Patrol agents, ICE officers, and Homeland Security personnel. (Applause.)

In addition, our strategy calls for us to confront, discredit, and defeat radical Islamic terrorism and ideology and to prevent it from spreading into the United States. And we will develop new ways to counter those who use new domains, such as cyber and social media, to attack our nation or threaten our society.”

“For the first time, American strategy recognizes that economic security is national security. Economic vitality, growth, and prosperity at home is absolutely necessary for American power and influence abroad. Any nation that trades away its prosperity for security will end up losing both.”

3. Protecting our country with a strong military:

“The third pillar of our strategy is to preserve peace through strength. We recognize that weakness is the surest path to conflict, and unrivaled power is the most certain means of defense. For this reason, our strategy breaks from the damaging defense sequester. We’re going to get rid of that. (Applause.)

It calls for a total modernization of our military, and reversing previous decisions to shrink our armed forces — even as threats to national security grew. It calls for streamlining acquisition, eliminating bloated bureaucracy, and massively building up our military, which has the fundamental side benefit of creating millions and millions of jobs.”

4. Recapturing our leadership role in the world:

“America will lead again. We do not seek to impose our way of life on anyone, but we will champion the values without apology. We want strong alliances and partnerships based on cooperation and reciprocity. We will make new partnerships with those who share our goals, and make common interests into a common cause. We will not allow inflexible ideology to become an obsolete and obstacle to peace.

We will pursue the vision we have carried around the world over this past year — a vision of strong, sovereign, and independent nations that respect their citizens and respect their neighbors; nations that thrive in commerce and cooperation, rooted in their histories and branching out toward their destinies.”

In closing, President Trump summarized his vision for America:

“With this strategy, we are calling for a great reawakening of America, a resurgence of confidence, and a rebirth of patriotism, prosperity, and pride.

And we are returning to the wisdom of our founders. In America, the people govern, the people rule, and the people are sovereign. What we have built here in America is precious and unique. In all of history, never before has freedom reigned, the rule of law prevailed, and the people thrived as we have here for nearly 250 years.

We must love and defend it. We must guard it with vigilance and spirit, and, if necessary, like so many before us, with our very lives. And we declare that our will is renewed, our future is regained, and our dreams are restored.

Every American has a role to play in this grand national effort. And today, I invite every citizen to take their part in our vital mission. Together, our task is to strengthen our families, to build up our communities, to serve our citizens, and to celebrate American greatness as a shining example to the world.

As long as we are proud — and very proud — of who we are, how we got here, and what we are fighting for to preserve, we will not fail.

If we do all of this, if we rediscover our resolve and commit ourselves to compete and win again, then together we will leave our children and our grandchildren a nation that is stronger, better, freer, prouder, and, yes, an America that is greater than ever before.”

On two particular items, Trump has gone even further than Reagan – a tougher stance on illegal immigration (Reagan signed an amnesty bill) and deeper tax cuts, especially on the corporate side. The Democrat’s reaction to it exposes their fear. With the corporate rate going from 35% to 21% the economy is set to expand like we haven’t seen since the 1980’s.

For years many of us have hoped for the next Ronald Reagan. Well, he’s here. And he’s winning and America is winning and the American people are feeling great again – just like they did 37 years ago.

Now They're Taking Down Portraits

2017: The Year that was Never Supposed to Be