Note from Author: As one who loves exploring old history records I was surprised to run across some papers very old that were apparently notes by Doctor John Watson. I felt that given the time of year I should share them. 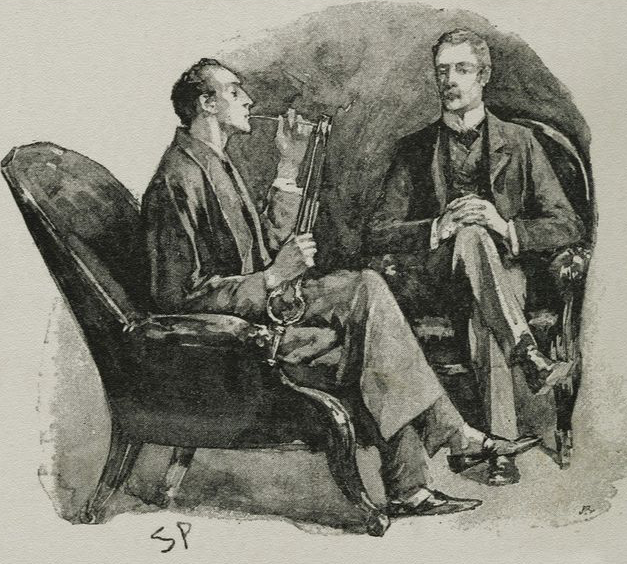 With the season of Holiday Merriment upon us I thought it would be a good time to visit my dear friend Sherlock Holmes. Being newly married I have not been back to my old lodgings at 221B Baker Street for a fortnight. It was no problem using my old key to enter and I did not have to bother Mrs. Hudson. She would know I was here once she spotted my coat and bowler on the hanger by the door. Oh how often I tread those seventeen steps to the rooms help by the great detective. I was not surprised to find the door open.

“Do hurry in Watson and shut the door. No point letting in a draft.”

“You no longer surprise me.” I laughed. “Obviously you heard the cab outside and my tread on the stairs.”

“Obviously” he replied. Holmes did not bother to stand and was sitting in his favorite chair by the fire place in his worn dressing robe. As I closed the door he waved me to the chair opposite him asking “And what brings you here away from the charms of Mary.”

“She had to visit her sister in Brighton and as I was in a celebratory mood with the conclusion of a successful game of Whist at my club I thought I might share my winnings by inviting you to a music hall.”

Holmes smiled wistfully and sighed “I wish that I could, but I am in the middle of a puzzle but I am pleased of the happenstance that brought you here. I know of no one I can talk to about this”

“Ah, a new case and one that is actually a challenge.”

“More than that old chum. It is one that demands more than the usual three pipe solution.” With that his eyes darted to his desk and I worried that it was something that would encourage the old seven percent solution. He had promised to give that up years ago and kept his word.

“Never fear” he chuckled. “I need my full intellect to work on this one. And it is a strange matter, not a simple murder in a locked room or anything as grand as a scheme by some foreign power to destroy our empire.”

I knew that there was no point in pushing the issue as Holmes would give more detail when he felt like doing so. He signed and pulled out the Persian slipper to refill his pipe, For a few minutes he enjoyed the fumes that so often irritated Mrs. Hudson when she cleaned the rooms. Finally his grey eyes leveled at me and he commented, “You remember our meeting with that Wells chap.”

“Herbert Wells, the romance writor. Don’t tell me that he wanted you to take an interest in his time travel scheme?”

“The very same. And this time I took him up on the offer to visit his lab. I actually saw the machine he is writing a story about and either I was put under a spell, something I do not believe in, or he is on to something. He begged me to try it and I foolishly did.”

“Good Heavens! Was there an accident?”

“In a sense there was. He claimed that he had been to the past and went to our former Amwerican Colonies. What made me believe him were fresh theater tickets and a program to a music hall of sorts in the capital of the United States. The star featured was Irene Adler.”

“This is beyond belief. And you tried it.”

“Indeed I did as I have often been puzzled over that woman and felt this would be the way to learn some things. However, there was a mistake.” Holmes lingered a few minutes and I blurted “Out with it man. Don’t leave me hanging?”

“Alright, but this is not a story you can send to the Strand. You would not only be disbelieved, you would be laughed at.”

And then the great detective put down the pipe and steepled his fingers. What he would tell me is something I may write down, but trust will never be found.

Holmes let himself be strapped into this infernal machine by Wells who turned dials and pulled switches. He then told Holmes “You will only be gone for two days. Twenty four hours to be exact and during that time this machine must be hidden and you must return to it or you will be stranded in America’s past.”

There was a mistake. Holmes did go to America, the United States to be exact, but not back. He went forward and this I found hard to believe except for the newspapers he showed me, fresh, crisp and not forgeries. He went to the year 2017.

“I fortunately had coins that were considered collector items” Holmes informed me “as I needed clothing that would not cause undue attention. I was in Washington, DC the nation’s capital and there was a feeling that my trained senses could not decode. My first day was spent visiting local museums and reading local papers. And on the second day I interviewed people. That is where things seemed

more peculiar than anything I have experienced in my life. I was not surprised by the advancements made in what they called automobiles, the streets were full of them. Or the fact that everyone seemed in a hurry and young people dressed in such a way that would have gotten them arrested in today’s London. What astounded me was seeing such a divided nation, no not just a divided nation but one in a divided world. No more British Empire to help with keeping the order of things.”

Holmes then got up and began to pace rubbing his hands together. “ I found in this future people who had every appearance of being the most well off in the world. I heard that the economy of the nation was recovering from a very weak presidential administration and that they now had a President Donald Trump who stood for loyalty to country, for virtues you my good doctor would applaud, a man who believes in the value of human life including the unborn. A real leader.”

Holmes then turned and said, “What I cannot understand is how half of the country is so full of hate. More prejudice toward the beliefs of others than I have even seen in today’s London and you know how critical I have been of that.”

Then helplessly, something I have seldom seen in my friend, he went on in a softer voice, “I had to leave too soon. Not that I had any idea what a man alone could do to change things. However, men alone and today women alone have done a great deal. Watson, I am not a church goer or religious man like you, but I do believe in a higher authority. I know judgement is coming to the world I saw and wish I could be there to witness it or to use a phrase I heard often in that future city, to be involved. So there you have it. Not a case, but a scenario”

I stood up and put my hand on his shoulder, something Holmes does not care for but this time he did not resist. “Listen to me as a doctor. We are just days away from Christmas, a time of remembering when a great change came to this world. Perhaps we can hope that will happen in the future United States and that this President Trump will be successful.

For the first time since I had been there that evening Holmes smiled broadly. “Right you are my good doctor. Let me change and I suggest we treat ourselves to a good meal. And, this may surprise you, I rather fancy visiting a nearby theater where there is to be a performance of Handal’s Messiah.”

That did surprise me as Holmes had little interest in religious music. Or once had. My friend hurried to his room to change, but then stopped quickly and gave me a wink.

“Who knows, maybe Wells will let me return and you should be with me. I would fancy knowing what will happen in 2018.”

The Conservative Politics of the Original Star Trek